Discarded maps are given a new direction in the hands of artist Nikki Rosato. 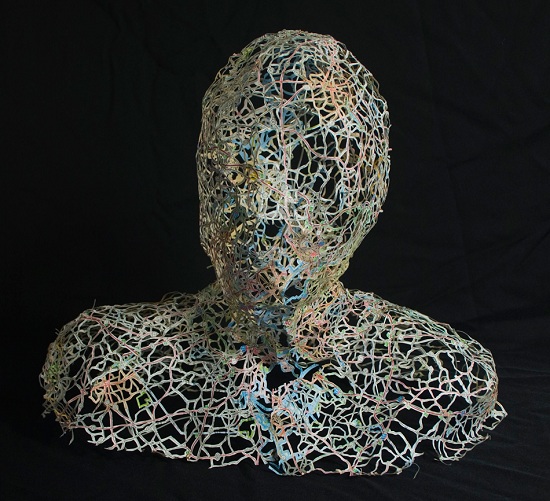 We might prefer it if our skin was smooth and wrinkle-proof, but Nikki Rosato celebrates the lines that mark us. In her work, the Boston-based artist, interested in portraiture and figurative work, draws parallels between the contours of our bodies and the lines on a map. 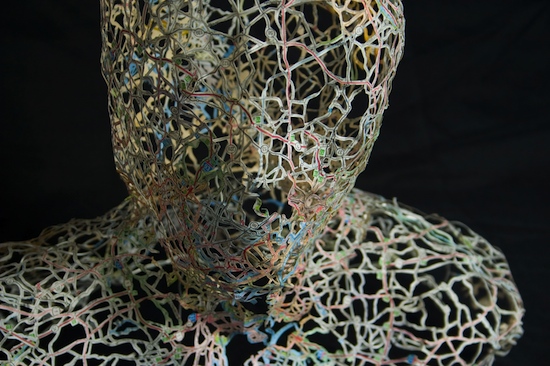 Though she works mainly in 2-D, creating beautiful and unique portraits out of the discarded maps she collects, Rosato has begun to experiment with sculpture, too. Above is an incredibly intricate 3-D representation of her own head, created using two maps of Boston. 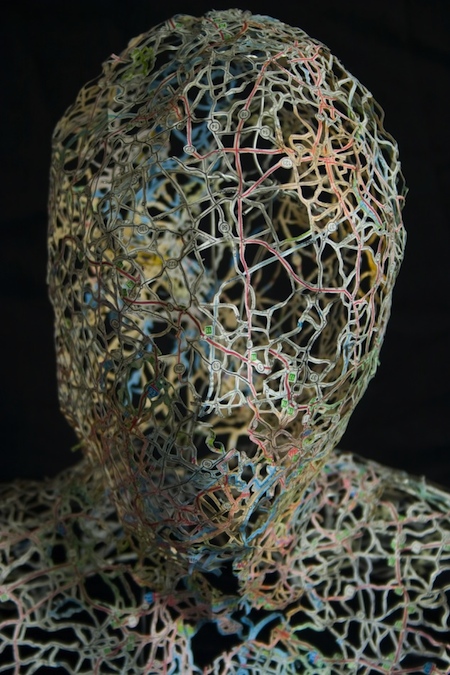 “The map is memory,” says Rosato, who was originally inspired to work with them after stumbling across a box of vintage maps in a used bookstore in Virginia. It’s a statement that works on two levels. As visual representations of place, the maps in her work demonstrate how we are all defined by place; how place is irrevocably stamped upon us. But, increasingly, maps are a memory themselves — tangible products of the cartographer’s hand, rapidly outmoded by technological advances. 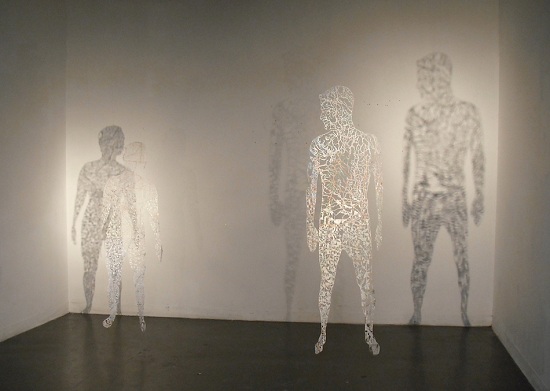 “People rarely use paper maps for their original purpose anymore,” explains Rosato, who draws satisfaction from repurposing her chosen material. The installation, pictured, of cut-map figures hanging in a darkroom, was created entirely out of secondhand maps given to her by a friend. The shadows the figures cast on the back wall show well how she uses maps both to mimic our skin and the network of veins and arteries beneath it, and as a system to reflect our less physical identity. 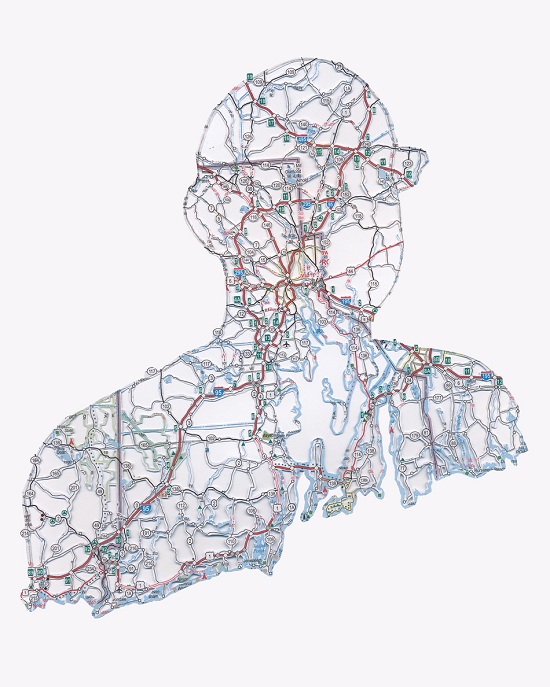 Using the short, sharp blade of an X-Acto knife, Rosato removes all the details of landmarks on a given map, so just the lines of the roads and rivers remain. The result is a punctured framework of lines: the roads and highways have no obvious destination, making it almost impossible to identify the locations represented by the maps in her work. To this end, Rosato’s creations reflect on what it means to be viewed only as a physical thing; as a body without meaning, without a name. When she began her first series of map portraits, entitled “If you were a place you’d be… ,” she was interested in the way the body is sometimes presented as just a structural casing, divorced from feeling. It’s this plurality of meaning underpinning Rosato’s work that makes it so appealing. 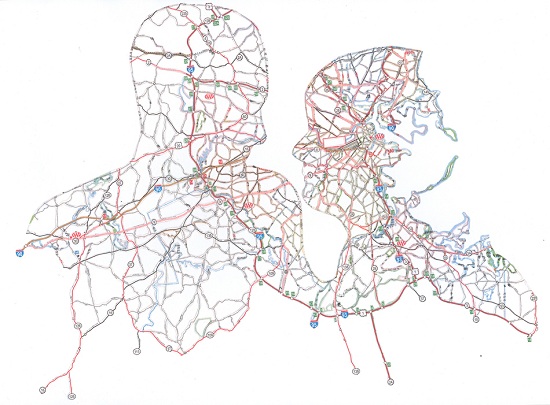 Rosato began by photographing friends, family and colleagues and asking them which place they felt best represented them. “The places varied from where they grew up, to where they went to college, to where they had a memorable vacation,” she says. She would then source secondhand maps herself with which to realize the portraits. 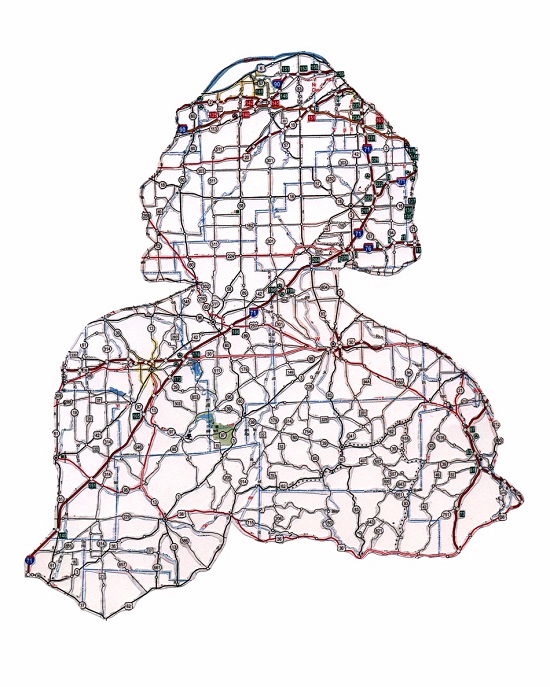 Today, anyone can commission Rosato via Etsy, the online portal for all things handmade. “I’ve done commissions for couples, using maps of where they met or fell in love, of people’s parents and friends, even people’s dogs,” she says. Subjects can choose which place is used to represent them, and they have the option to supply the artist with their own old maps. 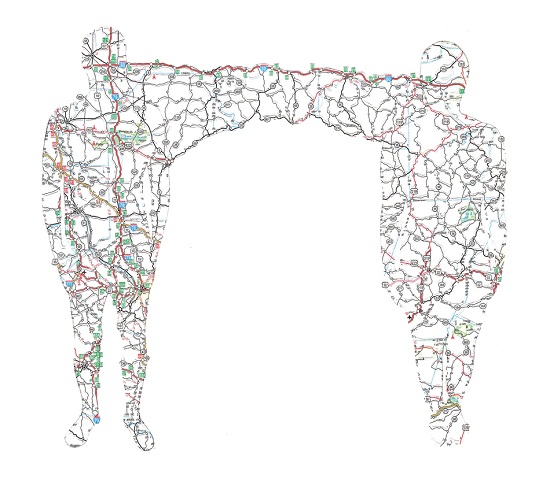 Rosato was recently commissioned by a man to produce a portrait of his German parents. He had discovered some vintage German maps from the 1950s in his grandmother’s basement and sent them to Rosato to work with. “It is so nice when the piece can be of a specific place that is truly sentimental to its owner,” she says. 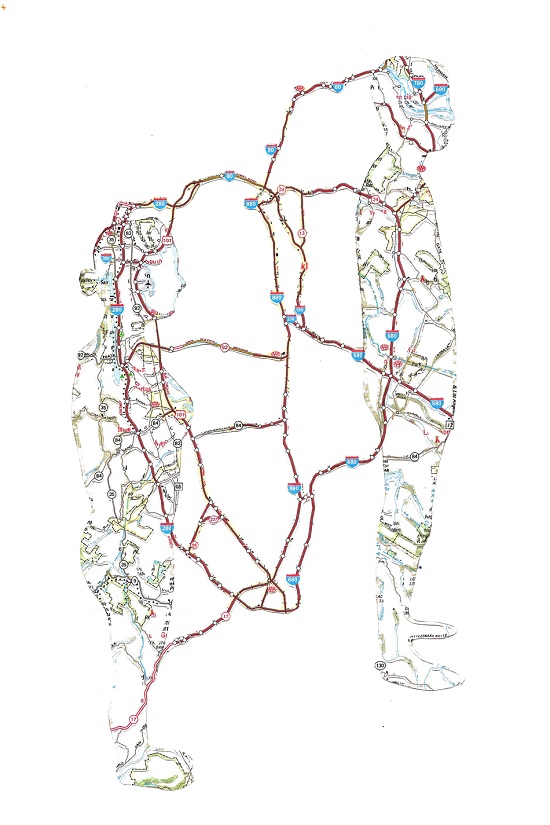 Though it would be possible for Rosato to get the maps laser cut, she insists it is important that her portraits are handmade. “I like to become immersed in my material,” she explains. “Just as you study all the lines and wrinkles on your face, or know where all the freckles are on your partner’s body, I like to know how the roads on a map curve, and what the different key symbols represent.” Labor intensive and process oriented, pieces can take weeks, sometimes months to complete. 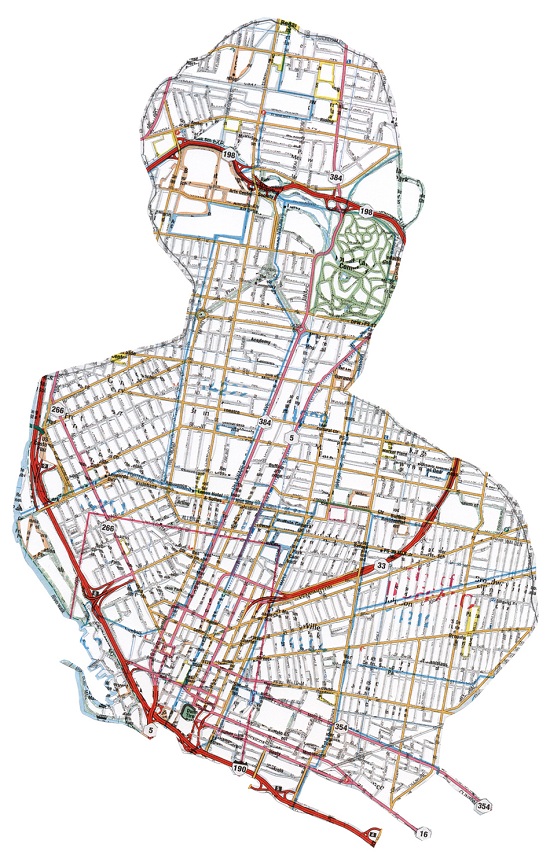 Rosato started working on her cut-map series after graduating with a B.A. in Studio Arts, History of Art and Architecture from the University of Pittsburgh in 2008, and the project shows no sign of reaching a dead end. The motor organization, AAA, has helped her amass a collection of maps that will enable her to experiment for some time. For her birthday this year, her mom surprised her with 20 pounds of used maps. “Using beautiful old maps in my creative process is a great way to recycle them,” she says. 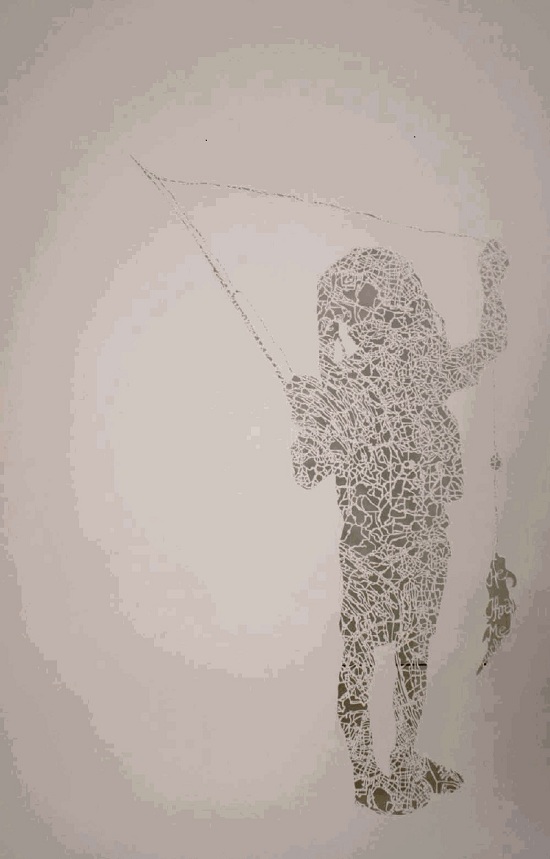 In her most recent work, Rosato is using recycled cut maps as stencils to create large-scale drawings and cut paper pieces. “I’m hoping to create a narrative through the visual, figural relationships that I lay out across the drawing paper — touching on ideas of loss, abandonment, identity and relationships.” These are grand themes, and no doubt Rosato will ensure they shine through her work. What’s more, even if the inspiration behind her art remains elusive to the onlooker, there’s no doubting the results are visually alluring. 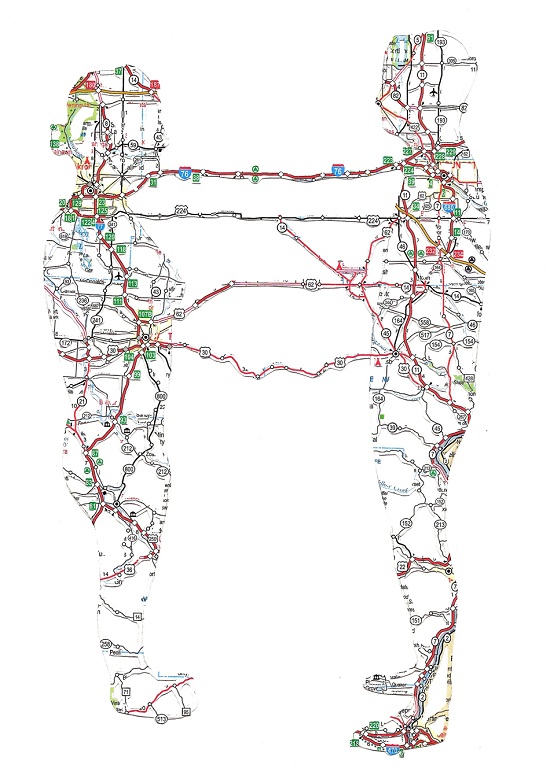 Special thanks to Nikki Rosato for permission to use all the images included in this article.