Genuine pop artist or parodist of pop culture? One thing Mr. Brainwash isn’t is a broken record — though the same can’t be said of his portraits of music legends using upcycled vinyl.

Mr. Brainwash, aka Thierry Guetta, is a French artist living in Los Angeles who turned filmmaker and then artist again. Apart from putting a positive spin on everything — “life is beautiful” after all — he also believes in benefiting the environment. He puts such thinking into practice as much as possible in his art, whether it be using the street as a giant canvas, or utilizing trash like old TVs, recycled tires or broken records — all of which he has transformed into amazing works of art.

Yet it was Mr. Brainwash’s portraits of some of music’s most recognizable icons that truly captured our imagination, created, as they are, using the fragments of hundreds if not thousands of slabs of old vinyl. Who knows, some of those very same artists may have even been featured on the records. Recycling and remixing old music media just came full circle! 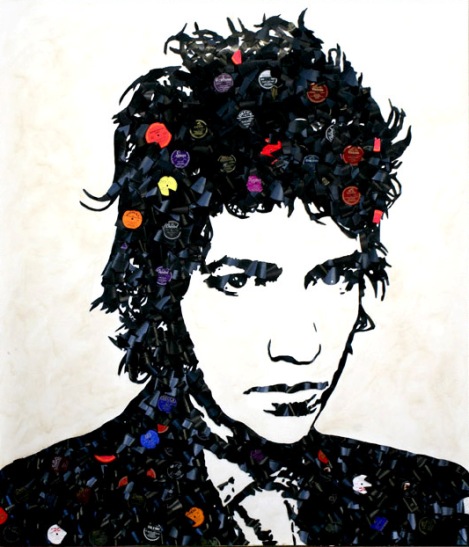 All images courtesy of Mr. Brainwash

Talking about his broken vinyl series, Mr. Brainwash says, “I wanted to show different faces of people — just normal people — who ended up with extraordinary things because they believed in what they wanted to do. It’s delivering a message that I want to communicate [to the audience] that anything is possible.”

And the audience loved it. His 2010 Icons: Part One exhibition in New York’s Meatpacking District featured his vinyl portraits and was not only sold out, but also New Yorkers even lined up in the freezing February weather just to get a glimpse! So popular was the show that it got extended through May and again until September, reopening as Icons Remix. 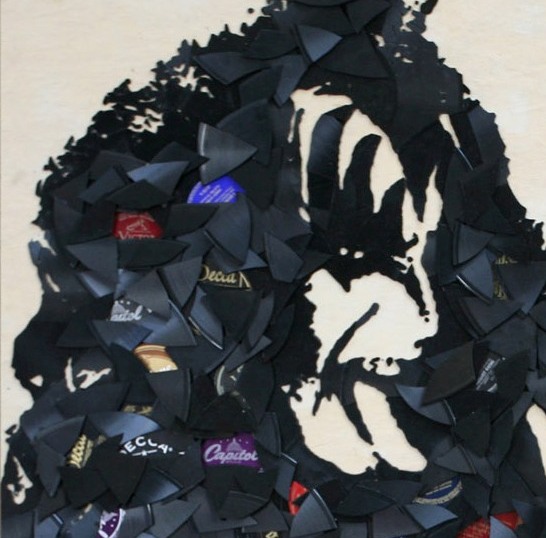 How we love them — KISS detail

Each portrait cleverly uses not only the records’ black vinyl disc, but also the colorful labels, often with astonishing results. Many records are broken into tiny, specific shapes so that each fragment can become a facial feature — an eyebrow, the curve of a nose or part of an ear, for example. 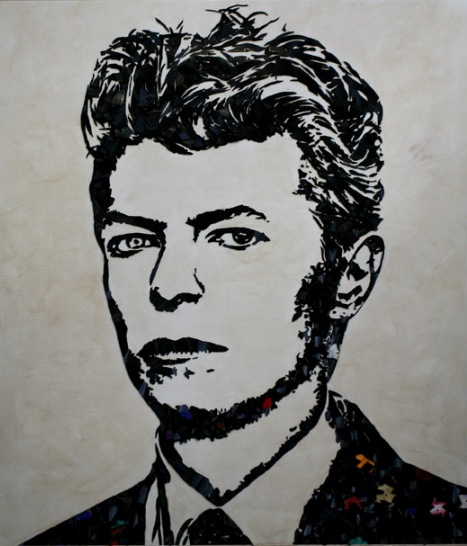 In the case of Mr. Brainwash’s portrait of Michael Jackson in his youth, both techniques can be seen: the colorful record labels add to an impressive Afro, while tiny black shards make up the intricate design of his shirt. Meanwhile, splintered CDs were used for for the shades’ of the former child star’s adult likeness, seen top. 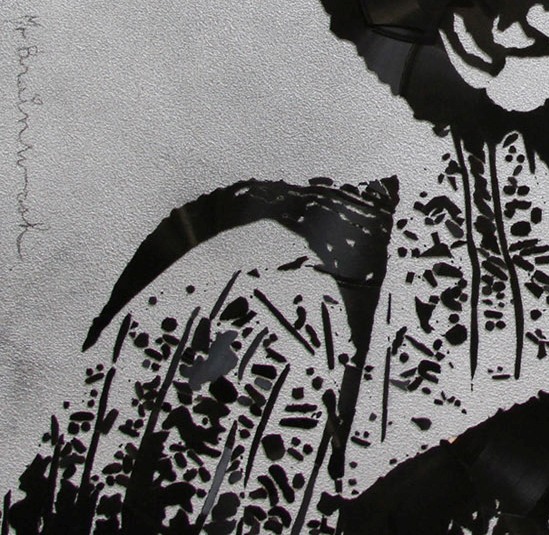 Mr. Brainwash is also known for his street art and art installations, like the ones seen at his first solo show, Life is Beautiful, held in Los Angeles in 2008. Shortly after, he was approached by Madonna to design the album cover for her greatest hits album, Celebration, which came out in 2009.

Mr. Brainwash’s take on street art offers a clue to his moniker: “Street art is something that you live with, even if you don’t want to. It’s something that is part of you. It kind of brainwashes you subliminally.” 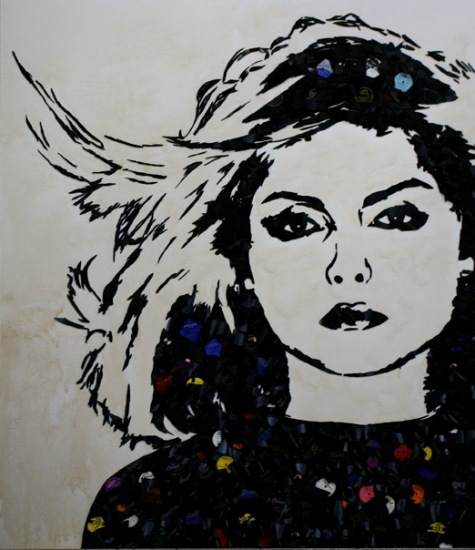 But then, Guetta apparently came up with the name in the ’80s, when everything had to be a brand. He told BlackBook: “I choose Mr. Brainwash like I would choose something else, but I thought that everything is about brainwashing in a way, you know — every image. I think life is about brainwashing… I got brainwashed from what I see. I thought it was a cool name and I don’t know, I just like the sound of it, and I guess it has a meaning with what I do.” 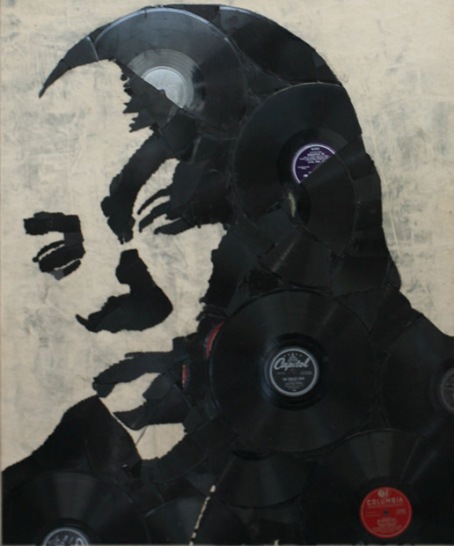 A fitting tribute to rapper and record producer Dr. Dre — the only portrait incorporating a whole record

For young artists out there trying to make it, Mr. Brainwash has the following advice: “There is nothing holding you back except yourself. Art is freedom. So go for it. Don’t think too much. Follow your heart and you’ll make it happen. I believe that anybody — even the worst artist in the world right now — can create good work. If you want to make it happen, you can do it. Everybody has a diamond inside — just believe [in it] and polish it and you will shine.” 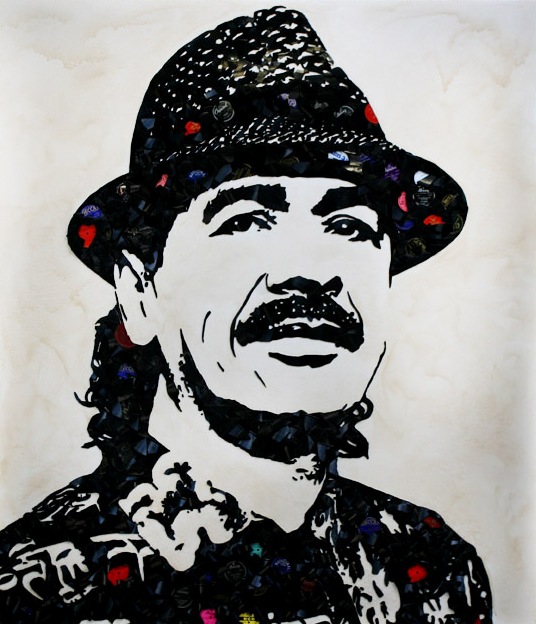 Legendary singer and guitarist Carlos Santana with his trademark hat

Thierry Guetta moved to Los Angeles from France in 1982. He created pop art from 1989 to 1993, and then switched to filmmaking, documenting the lives of artists for more than a decade. He came to street art through his cousin, Invader. After exploring urban art and its creators through his filmmaking, it was through Banksy’s Exit Through the Gift Shop that Mr. Brainwash stepped in front of the camera with his own art. No stranger to controversy, he has been called a genius, an imposter and the art world’s Borat. But, to form your own opinion, you should visit Mr. Brainwash’s website and see for yourself.