Givmo: A New Website That Makes You an Eco-Donation Hero

To throw away or not to throw away? Givmo erases any guilt with its eco-friendly online marketplace aimed at making one man’s junk another man’s treasure.

During the 1980s — also known as the glory days of America’s love affair with consumerism — a bumper sticker emblazoned with the telling phrase “He Who Dies With The Most Toys Wins” perfectly summed up when everyone and their uncle was not only thinking, but also actually doing. Fast-forward several decades later, and even though we’re in the throes of what many economic experts refer to as the Great Recession, our desire for more, more, more! has hardly dampened despite our slightly slower pace of acquisition. This consumeristic culture is so deeply engrained within us that we rarely notice just how much stuff we’ve managed to cram into our living quarters in the first place. We open cupboards with a deep sigh, perusing stockpiled goods while bemoaning the fact that there’s nothing to eat. We scan our walk-in closets, hard pressed to choose among the 247 garments competing for our attention. (Raise your hand if there are at least 10 pieces in your closet that you’ve only worn once in the past two years.) Some of us even dread opening our hallway closets for fear that random possessions will come spilling out, perhaps knocking us unconscious. 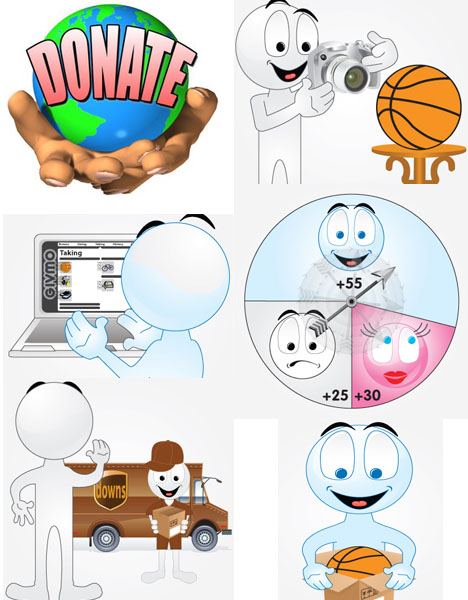 What do we do to purge our lives of the things that we didn’t think were all that special in the first place? Donating them to less privileged individuals would be the sensible thing to do, but sadly, far too many of us take the quick-and-easy route by plunking our junk onto the curb when garbage day rolls around. While this practice has spawned a thriving DIY recycling/upcycling cottage industry, in which eager trash-to-treasure enthusiasts rescue and refurbish curbside castaways, wouldn’t it be a little less energy intensive (and far less wasteful) to allow eagle-eyed people first dibs on things you’d just as soon say buh-bye to through a more organized forum? For many years now, websites such as Craigslist and Freecycle have enabled the public to post free advertisements informing fellow community members that their unwanted stash of trash is up for grabs, and that has certainly eased the burden on our landfills a bit. The major drawback to both sites, however, is that they function more optimally at a local rather than countrywide level, whereas new kid on the block Givmo’s online donation clearinghouse benefits anyone, no matter where they live. Initially launched as a way to solve the age old conundrum of what to do with all of the superfluous stuff in our lives, Givmo’s founders Dustin Byrne and Judy He say that the obvious benefit of reducing consumption while finding a home for household orphans is that it triggers an automatic warm-and-fuzzy feeling. Although they didn’t set Givmo’s wheels in motion with the express purpose of touting environmentalism, as their project has evolved, sustainability has been a convenient side effect that has made them unabashed eco-believers. (They’ve even worn their green on their sleeves by donating $1 to The Nature Conservancy for every item given a new home through the site.) So, in a nutshell, here’s how the Givmo system works: Sounds pretty cool, huh? Instead of moving that sadly neglected pile of Slinkies to the far corner of your already cluttered desk yet one more time, this might be precisely the right moment to finally send them packing — with absolutely no eco-guilt whatsoever. If you need a better (somewhat selfish) reason, just do it for the Karma!