Seven Incredible High Heels Made out of Bizarre Materials

High heels, not usually known for environmental friendliness, really can be green and thought-provoking if made from recycled or repurposed organic materials. 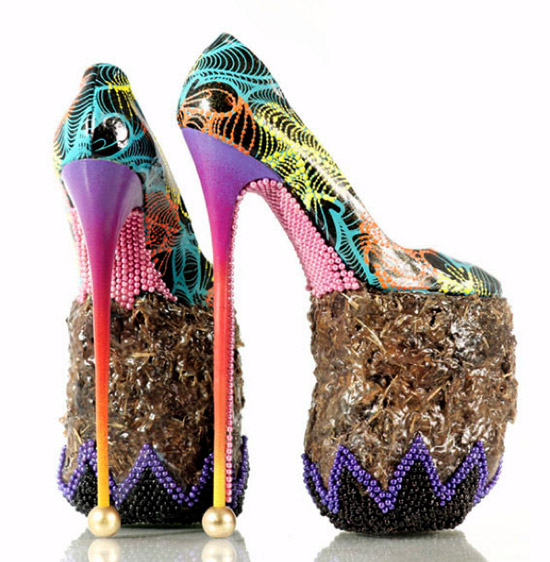 Image: Insa All images courtesy of the artists and used with permission

Though the origins of high-heeled shoes are still debated, it is likely that a precursor came — like so many other stylish and imaginative innovations — from ancient Egypt, where men and women belonging to the upper classes wore them, most likely for ceremonial purposes. However, Egyptian butchers also wore them for more practical purposes, namely to raise themselves above the level of the blood of the dead beasts on the floor below them. How’s that for an image that contradicts the notions of style and elegance that we associate high heels with today? 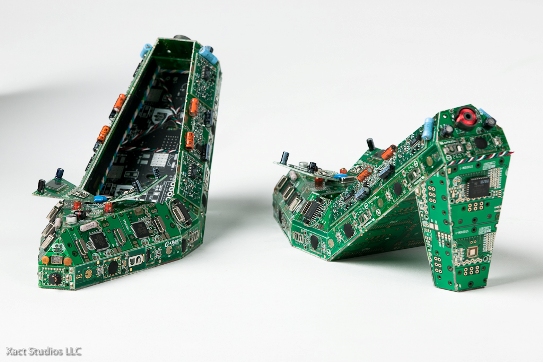 Shoes with heels were also developed by horsemen in the Middle East in the ninth century for functional purposes, as they helped to keep their feet in the stirrups while riding. And we are perhaps more familiar with images of well-off medieval townspeople wearing a type of high platform shoe to keep their feet out of muck and excrement when walking along the roads. 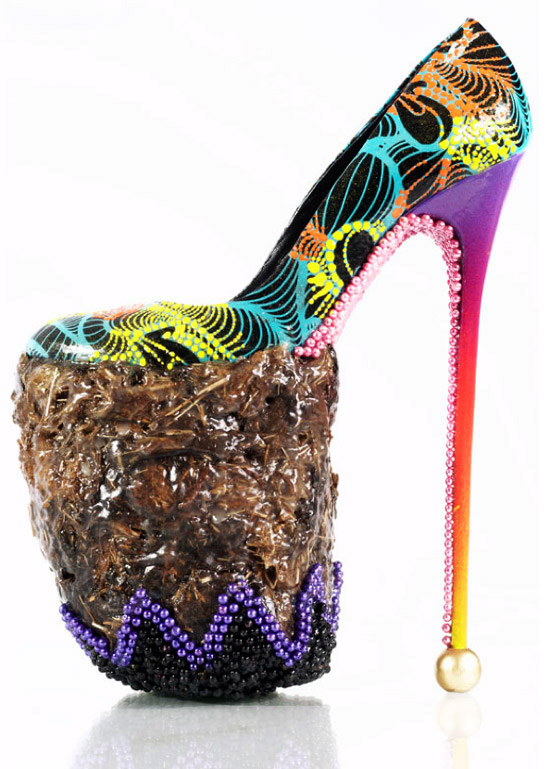 Throughout the ages, men and women have worn high heels for practical reasons, to indicate status, to restrict their movement or to simply elevate their height. Today, though high heels are usually worn by women, there are forms of footwear with elevated heels for men, such as cowboy boots and Cuban heels. 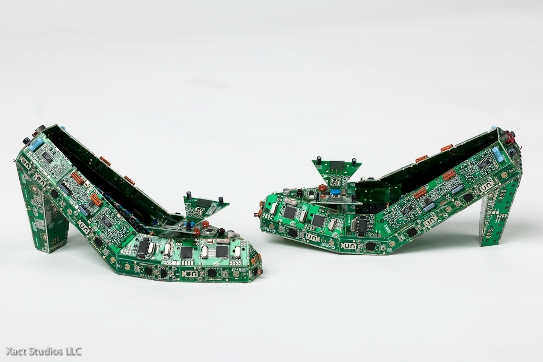 What’s more, as we’ve discovered, the innovations of history continue into the present, with many artists and designers making high heels out of an array of recycled and repurposed materials. Here are seven stunning creations that’ll make you rethink foot fashion forever. 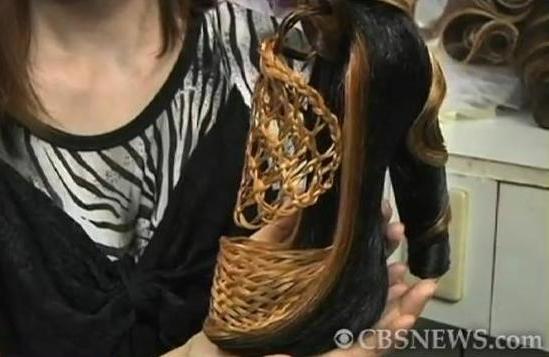 Fifty-four-year-old Taiwanese hair stylist Shiou-ying Tsai draws on her almost four decades worth of experience as a hair stylist to turn discarded hair into stunning high heels. Because of the nature of the material, the hair heels are actually supposed to be more comfortable than traditionally crafted pairs. 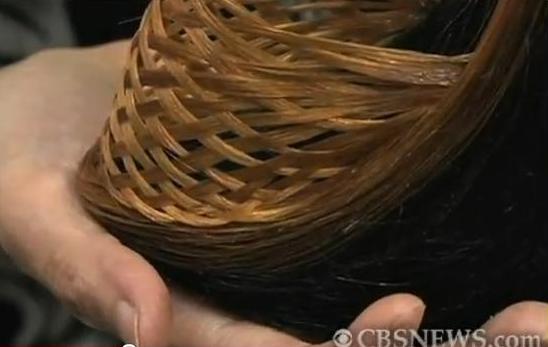 It takes Tsai about a month to make one pair of heels, but she also crafts beautiful accessories like brooches out of the leftover hair. Being flat footed, Tsai will not get to wear her own creations, but that doesn’t deter her from going ahead with more designs. Weaving recycled human hair into heeled footwear with the help of hair spray is definitely an art form that gets our vote. Cutting-edge stuff! 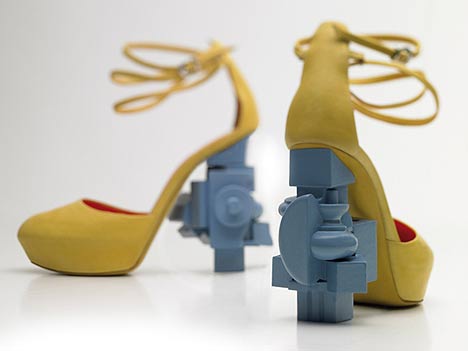 Assuming you hadn’t first practiced strutting your stuff in Insa’s giant heels, above, could you walk in 4.7-inch heels? Maybe so in these ergonomically shaped pumps from Danish designer Liza Fredrika Åslund. The heel of the “Recycle Shoe” is made out of pieces of wood left over from the construction of tables and chairs. Each piece was cut and mounted by hand on an iron pin and then stacked to form a single unit. 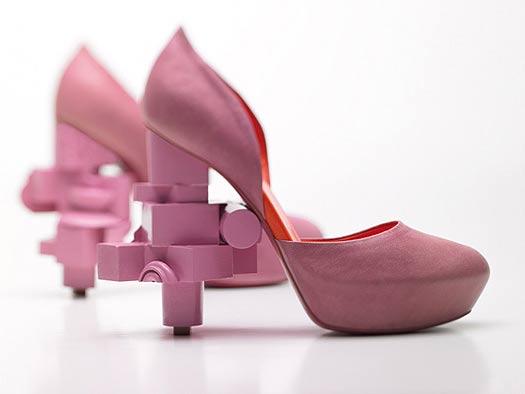 Designed for the first collection of fashion-art from “What’s More Alive than You,” a new Italian fashion brand, comfort was kept in mind despite the high heel, as the shoe was intended to provide a more even weight distribution on the ground while the user is walking. Now it’s just the choice between pink or yellow, since both models look stunning. 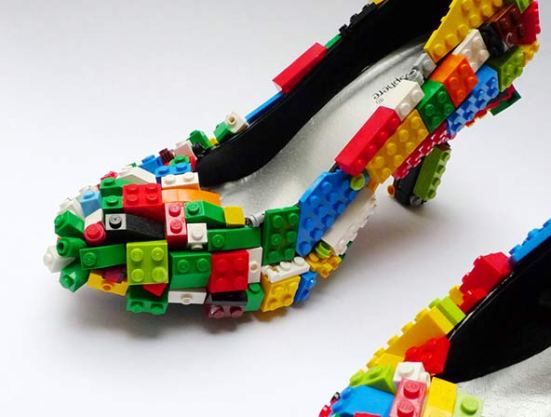 Playful readers will love British artist Finn Stone’s “LEG-GO Stilettos,” made from an old pair of heels decorated with the repurposed popular building blocks. On his website, Stone talks about his Legos series, which also includes a teapot, a hat and a cat: “Humor often arises when you mix the absurd with the real, and whilst I attempt to create a perspective personal to the viewer, I stumble upon an illogical beauty that resonates with comical tones.” 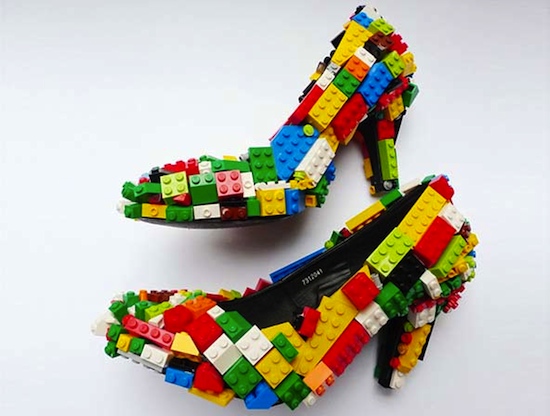 Though right now created purely as pieces of art, we could see the Legos heels becoming a hit in mainstream fashion. The only problem may be Legos fans trying to take the pieces off to start playing with them, but that’s a risk we’d be willing to see taken! 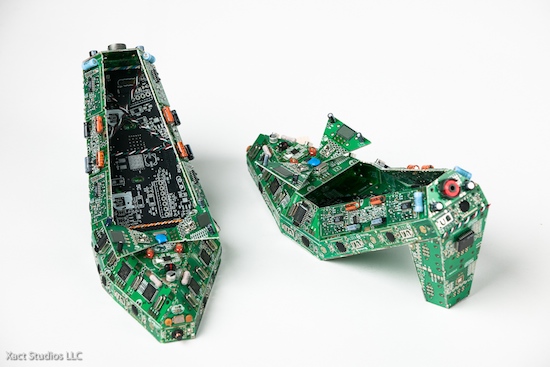 New York-based artist Steven Rodrig uses printed circuit boards (PCBs) to create what he calls “PCB Mixed Media” sculptures. While creating his art, he also reduces the number of PCBs that will be slowly rotting in our landfills over thousands of years, thus taking electronic recycling to a new level. Calling himself an environmentally conscious designer and computer geek, Rodrig says of his work: 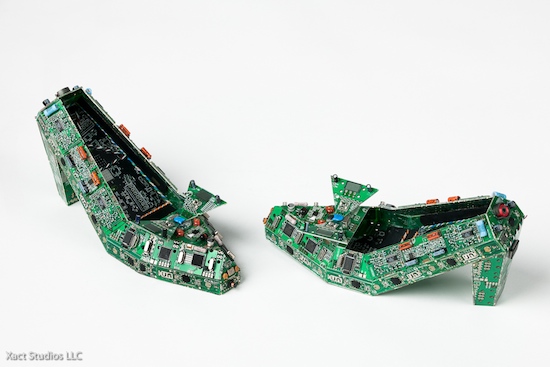 “My goal is to manipulate each PCB into becoming an organic life form where the PCB characteristics become part of the living fabric helping to shape its meaning… in order to manipulate each circuit board to form something other than what it was originally intended.” And this certainly works well for the PCB heels. With a bit of a soft insole, we could just about see them being mass produced and reaching a store near you soon! 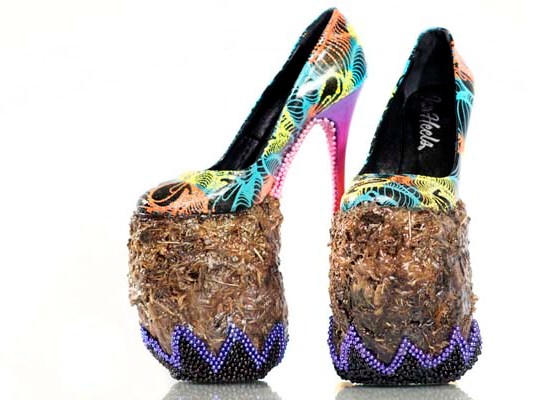 A personal favorite are these dung heels by British graffiti artist and designer Insa. As part of a collective of young British artists, the shoes are Insa’s response to the work of Caribbean artist Chris Ofili and were exhibited at the “Bring the Noise” event at Tate Britain. The tribute couldn’t have been more fitting, as integrating elephant dung into his work is Ofili’s signature style. 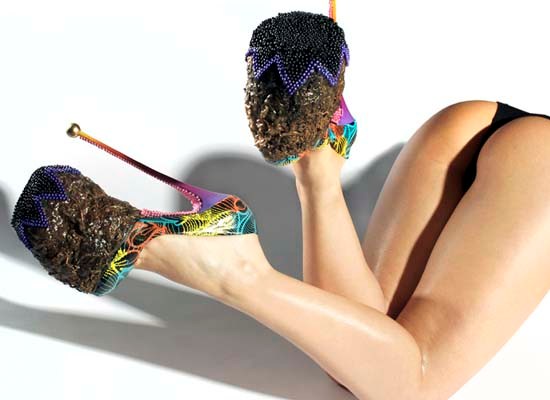 Quite predictably, the mammoth 10-inch dung heels have since created quite a stink — only metaphorically speaking, though, as elephant dung is apparently odorless, especially when dried. Reactions have ranged from “disgusting” to “brilliant,” yet no one has remained indifferent. 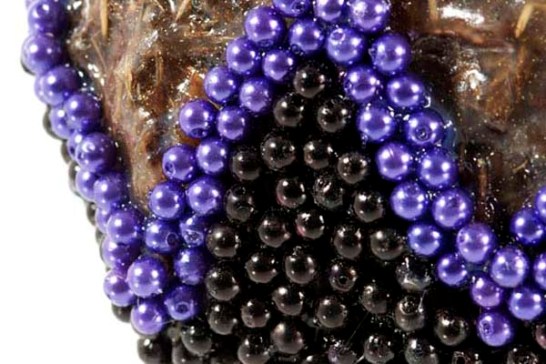 For Insa, integrating this material into his work was an experiment and a challenge, as one can imagine. Given that one elephant produces about 500 pounds of dung a day, it’s high time someone found a creative new use for this organic material. Fun recycling from an artist with serious concerns about the objectification of women in current consumer society. 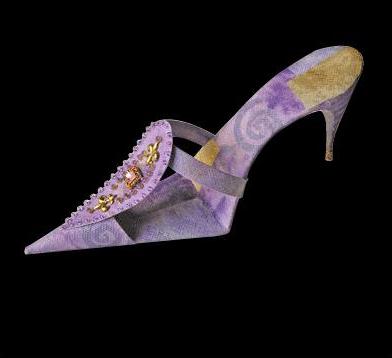 Though the most delicate of the heels portrayed here, New York-based artist Carlos Molina’s creations are no less powerful. The lavender shoe above is made out of recycled cereal boxes and painted paper towels. Who would have thought that such drab-sounding materials could look so stunning? 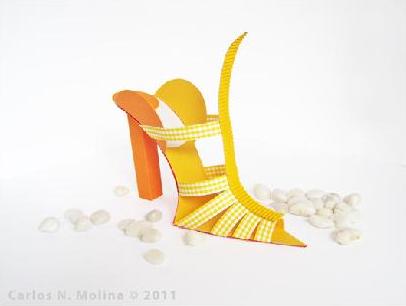 The yellow shoe above is made entirely out of paper and is about the same size as a real shoe. If you’re wondering why Molina’s creations look so perfect and real, then it’s probably because the artist has a lot of experience working with his materials. His passion for creating objects out of all kinds of paper started at the age of 5, when he would get up in the middle of the night to make various objects. 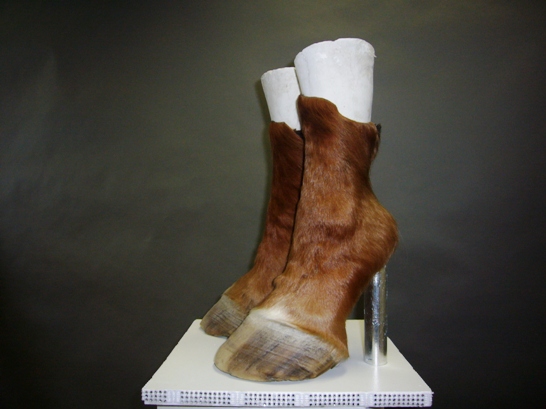 Many might call Iris Schieferstein’s motto, “The earlier you die — the longer you are dead,” a bit on the morbid side, but such is not the intention of the German taxidermy artist. On the contrary, when using dead animals as the raw materials for her pieces, she joins the fragments together to create new creatures, thus giving death a new face. No animals are harmed through the making of her creations, as she makes sure to only use animals that die of natural causes and are then donated to her. 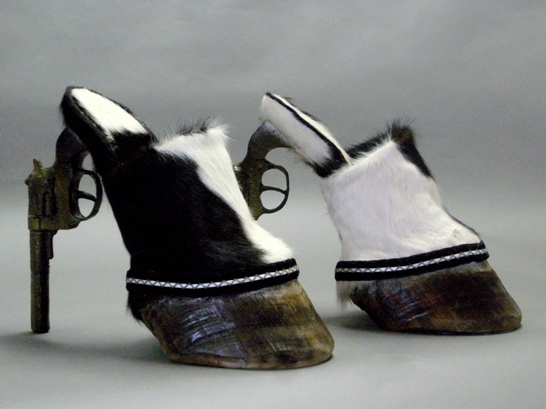 For her “Horseshoes,” Schieferstein has turned horse’s hooves into high-heeled shoes, and in the case of the “Cowgirl Shoes,” she has also adorned the footwear with old revolvers. Not your average piece of creative repurposing, but certainly thought provoking, to say the least. 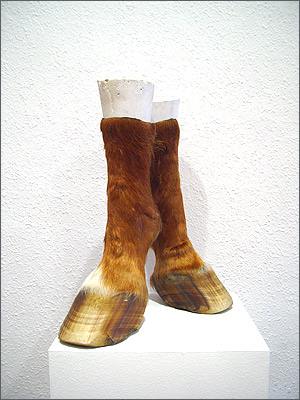