How to Make 10 Incredible Chandeliers Created Out of Everyday Junk

What do bike chains, eyeglasses, coffee stirrers and beer bottles have in common? They’re wonderful raw materials for chandeliers. Hard to imagine? Seeing is believing. 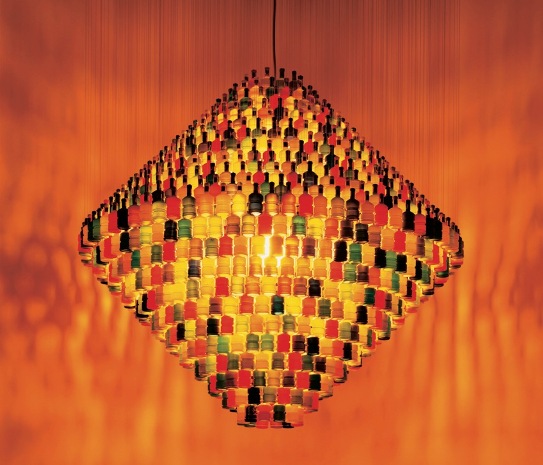 Image: Stuart Haygarth All images used are copyrighted and used with permission of the photographers/artists.

Chandeliers have always been elegant light sources, adorning grand dining rooms, ballrooms and even the castles of yesteryear. Repurposing, therefore, might not be something that comes to mind when thinking of these ornamental ceiling-mounted light fixtures. 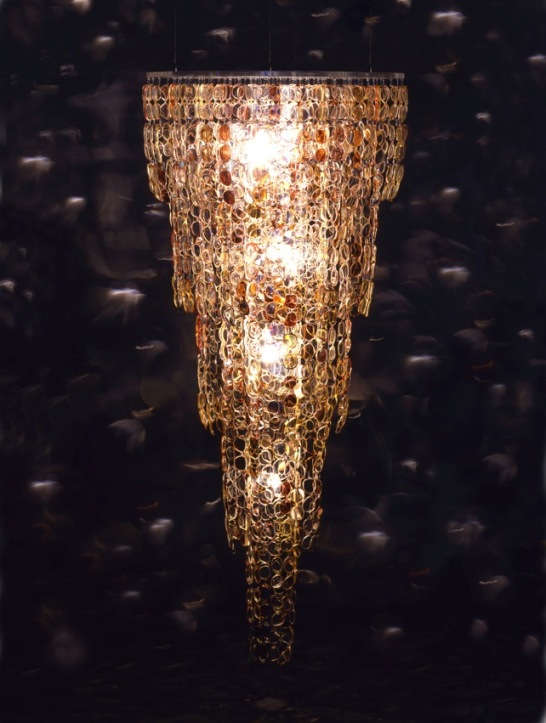 However, as the following examples show, almost anything and everything can be turned into a chandelier. Without further ado, then, here are 10 chandeliers made out of materials and objects that really will surprise you. 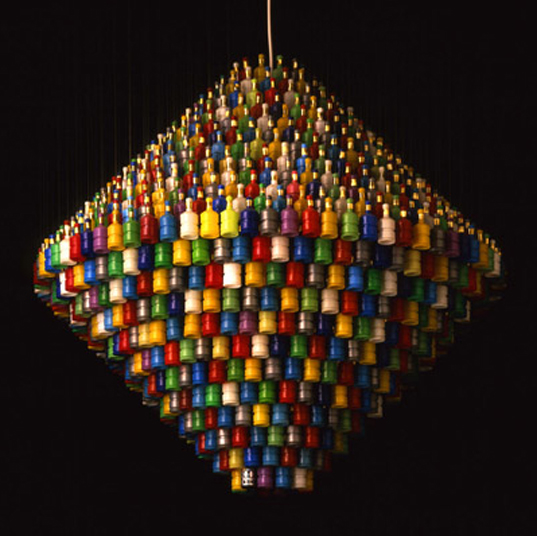 Remember the hype about the year 2000, the beginning of the new millennium? No, it’s all a blur? Well, designer Stuart Haygarth did remember, or better, thought ahead. After the millennium celebrations in London, he collected 1,000 party poppers and turned them into this stunning chandelier made out of blue, green, red, yellow and white exploded poppers. Below is the equally stunning all-black version. 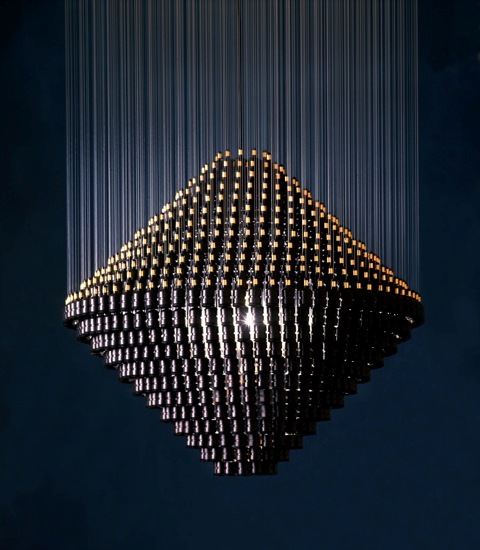 Designed in 2004 and aptly called “Millennium,” the chandelier hangs on monofilament lines held by “split shot” from an 86-cm square MDF platform overhead and is lit by a 60-watt incandescent bulb. It measures an impressive 4.9 feet in height and 2.6 feet in diameter. The beauty of this chandelier is that because of its light weight, it gently sways in even the faintest of breezes. Now this is the way to bring in a new millennium, and in some repurposing style! 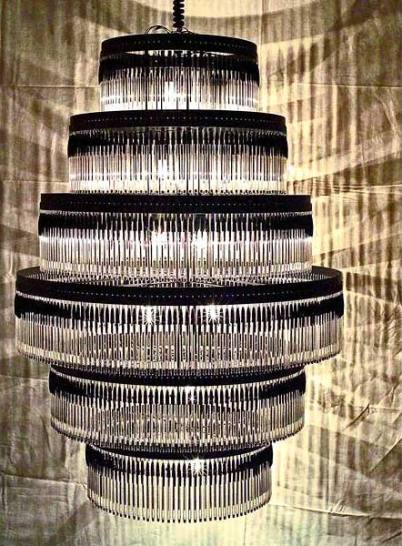 Yes, you read correctly. Even ordinary ballpoint pens make for chandelier material. And thankfully so, as, unfortunately, many pens end up on landfills, where the polyethylene and polystyrene materials they are composed of decompose extremely slowly. Madrid-based design studio enPienza! created its six-tier “Volivik” chandelier out of 895 Bic pens and paperclips. The light and patterns it creates is just incredible. 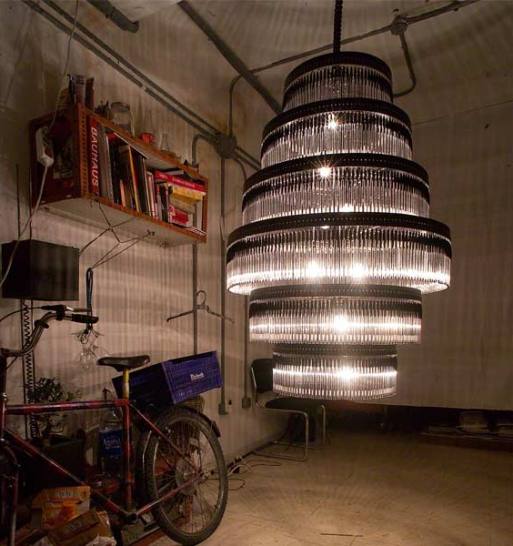 The design studio loves to experiment with everyday objects, and among its other products are a seat made using erasers, skateboard shelves and various table lamps made out of pens. Stylish repurposing all around. 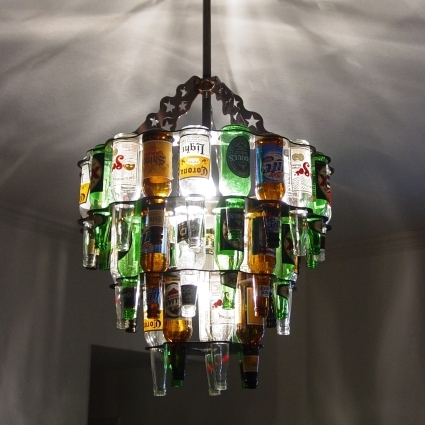 Bar and pub owners, take note — here’s what you always wished for: a way to recycle all those empty beer bottles, while at the same time providing stylish lighting, and advertising the brews on offer. Sounds too good to be true? Not with a beer bottle chandelier! 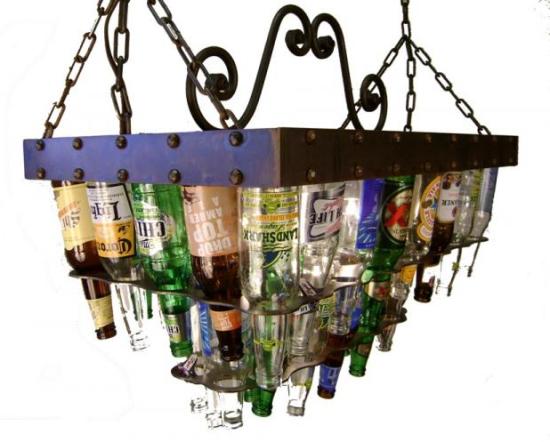 The folks at Barlite have been making beer bottle chandeliers for more than 10 years now and really know their stuff. The two-tier pool table chandelier below, for example, is made out of 52 bottles held in place by a steel rivet top band. It’s so cool, it leaves us speechless — though maybe that’s just the effect of all that beer… 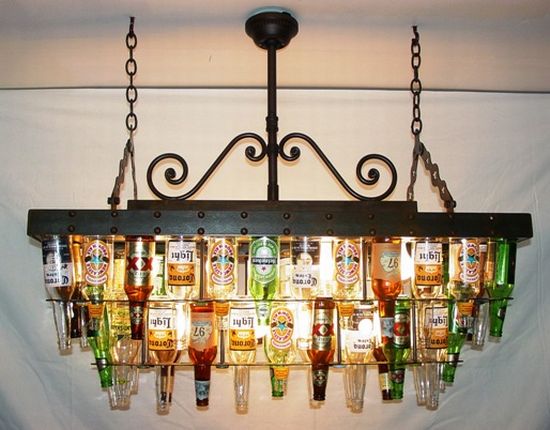 The best part about all of Barlite’s creations? The bottles are not fixed in place, so if you feel like changing them according to color, label, promotion or whatever empty “raw materials” you have a lot of at any given time, you can do so. What a great way to encourage glass recycling! 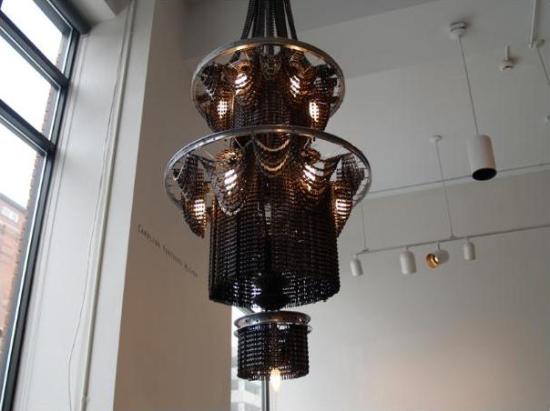 If you think bicycle chains only belong on your bike or in the garage, think again. Los Angeles-based designer Carolina Fontoura Alzaga makes beautiful chandeliers out of them. Her first model, pictured above, is called “Connect 1” and was made in 2007. The three-tier chandelier measures an impressive 5 feet in height. 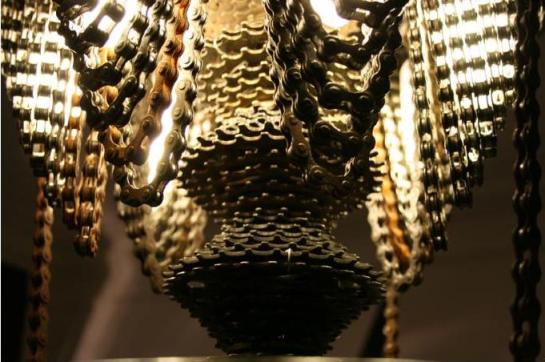 The detail above shows that, taken out of context, the meaning of objects changes and thus do the associations that we have with them. By contrasting the classic elegance of a chandelier with discarded, mechanical bike parts, Fontoura Alzaga creates a dynamic — and beautiful — object in a new setting. 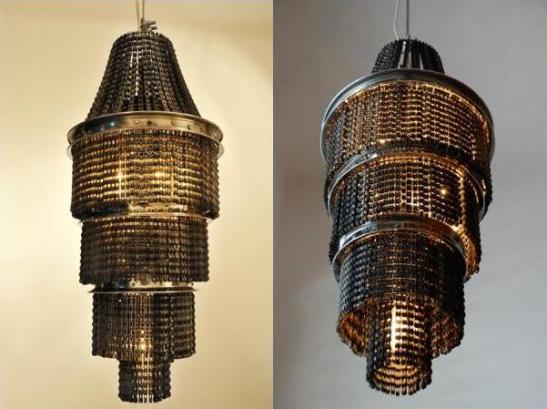 The artist says about her Connect series: “This series addresses class codes, power dynamics, reclaimed agency and ecological responsibility. The traditional chandelier is seen as a bourgeois commodity, a cachet of affluence, excess and as such power. The reclaimed bicycle parts become a representation of the dismissed, invisible and powerless, but are also an affirmation of self-propelled movement. The bicycle chandelier thereby creates a new third meaning of reclaimed agency.” High themes, indeed! 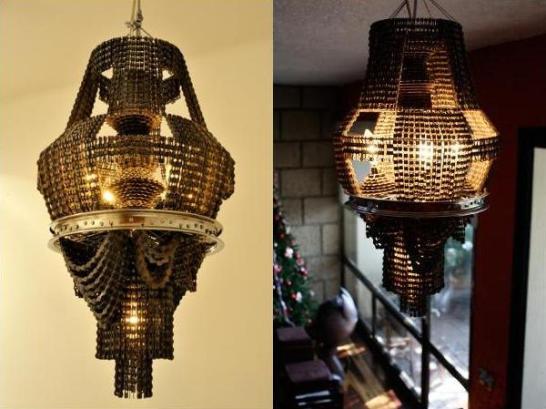 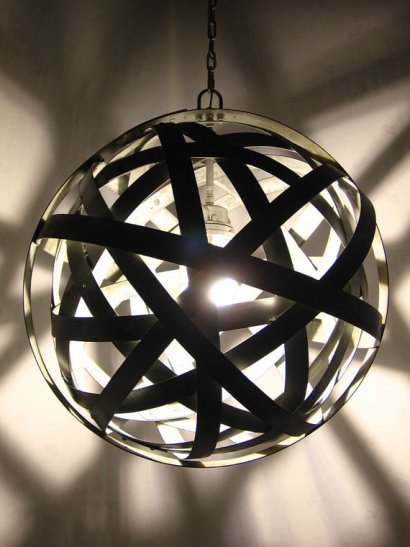 Those in favor of practical elegance will love these chandeliers made out of reclaimed wine barrel hoops. Fittingly called “Orbits,” each of the unique chandeliers look like a tiny planet orbiting in one’s living room, showroom or patio. 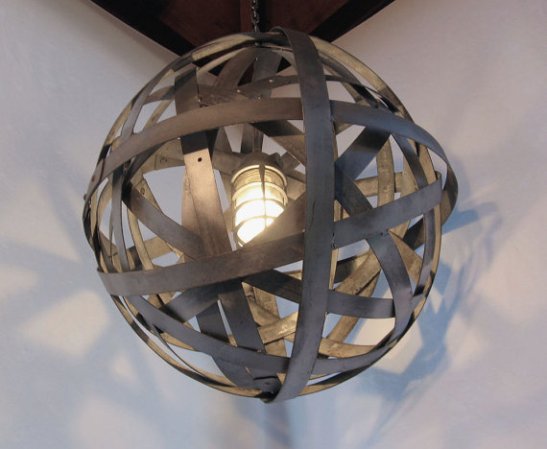 For each chandelier, various metal hoops from discarded French oak wine barrels have been first woven and then welded together. Each hoop is made of sturdy, galvanized steel and is about 26 inches in diameter, while each chandelier weighs approximately 45 pounds. 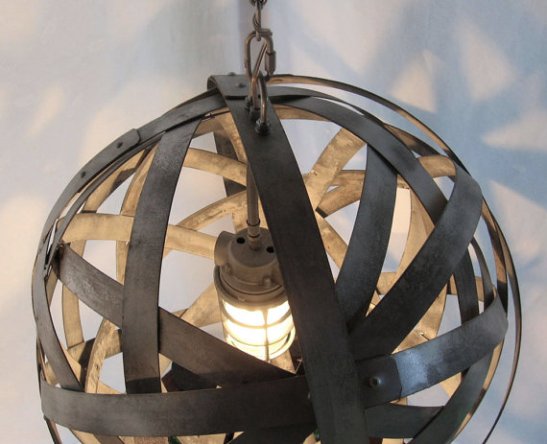 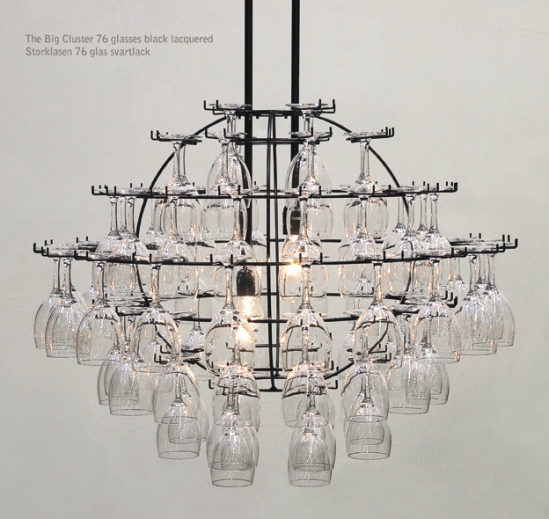 Here’s a chandelier we adore for being both stylish and practical. It’s not only a lighting source, but also holds your wine glasses — 76 to be precise. So, if you want to throw that big party, go for it! “Glasklasen,” The Glass Cluster, is the brainchild of Swedish design firm Form Nasielsky. The steel frame is intended to be used as wine glass storage. How perfect for any bar setting. 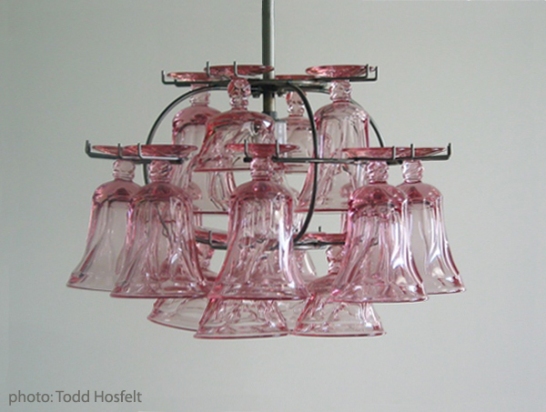 For individuals, rustling up 76 wine glasses might be a problem, but don’t worry, there’s a 16-glass version of the chandelier as well, and for anything in between, a 40-glass version. Regardless of size, the beauty of the design is that over time, as you change your wine glasses, so the aesthetic of your chandelier changes, too. And of course you can use the glasses for drinking, wash them, and then hang them up again. Multiuse brilliance. 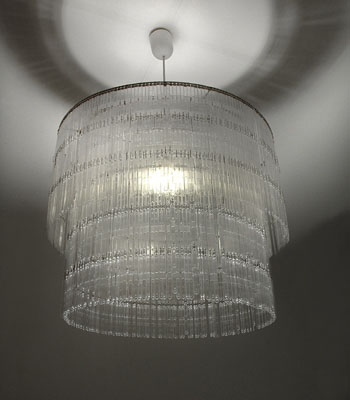 You know the little plastic stirrers you use for your coffee? They’re tiny and often transparent, and are also some of the most wasteful products on this planet: about half-a-million of them have been washed up on Californian beaches alone over a period of 20 years. Used only once, they are usually discarded after a few seconds. Portugal-based StudioVerissimo wanted to highlight this waste and not only turn these stirrers into something useful, but also something beautiful. 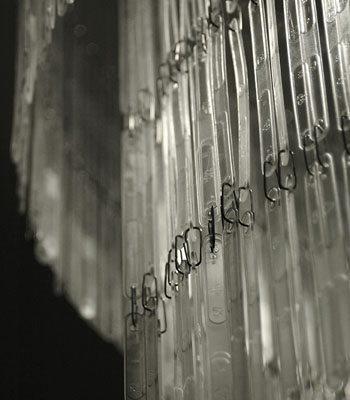 Using hundreds upon hundreds of transparent plastic stirrers attached to each other with paper clips, the creative duo of Cláudio Cardoso and Telma Veríssimo created this amazing six-tier chandelier. It is 21 inches in diameter and 18 inches tall. But, apart from highlighting everyday wasteful habits, StudioVerissimo also wants to make people smile with their designs. They surely succeeded with this one. Make sure to check out StudioVerissimo’s website for more quirky creations. 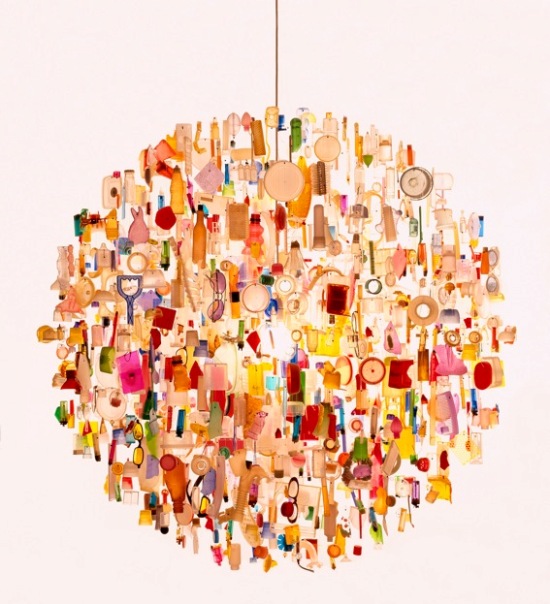 If you’re inspired to make your own chandelier out of repurposed odds and ends you have floating around your home but can’t find a unifying concept, simply use them all! Lighting designer Stuart Haygarth made his “Tide” chandelier in 2004 out of the “man-made debris” he had collected from a specific stretch of Kent coastline in the U.K. over many years. 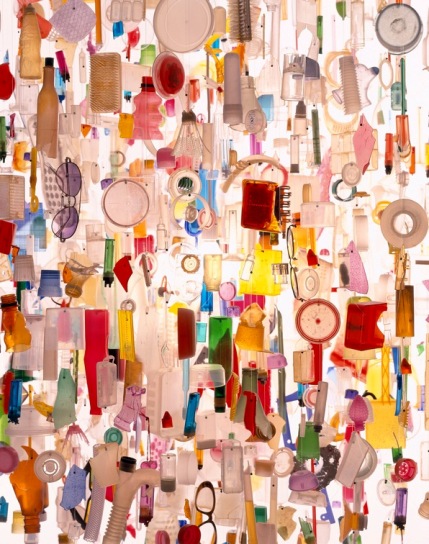 After collecting and categorizing his raw materials, the artist decided to use only translucent plastic objects like pill bottles, hair brushes, shovels and more — with stunning results! “Tide” measures almost 5 feet in diameter and approaching 7 feet in height. That’s a lot of junk with which to decorate an interior! Haygarth says about the chandelier: “Each object is different in shape and form, yet they come together to produce one sphere. The sphere is an analogy for the moon, which affects the tides, which in turn wash up the debris.” A piece of magical reconfiguring, so to speak. No wonder the 10 pieces created have sold out. 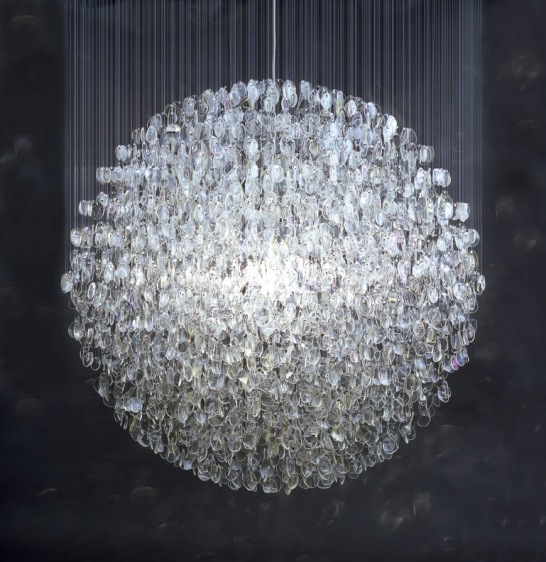 According to the WHO, about a quarter of the world population needs glasses. That’s a whole lot of spectacles being manufactured and distributed worldwide! In fact, in North America alone, more than 4 million pairs are simply thrown away each year. So, how about repurposing them, and doing so creatively by turning them into a new object that is useful and beautiful at the same time? London-based lighting designer Stuart Haygarth (whose work we’ve already marveled at) is a master at doing this. The globe-like chandelier pictured above is called “Optical” (2007) and is made of hundreds of single optical lenses. Taken out of their normal context — that is, their frames — the individual lenses are reconfigured into a new object altogether. And looking at the chandelier from afar, one does not even make the connection. A true spectacle indeed! Meanwhile, for his five-tier “Spectacle” (2006) chandelier (second from top) he used more than a thousand pairs of prescription spectacles. 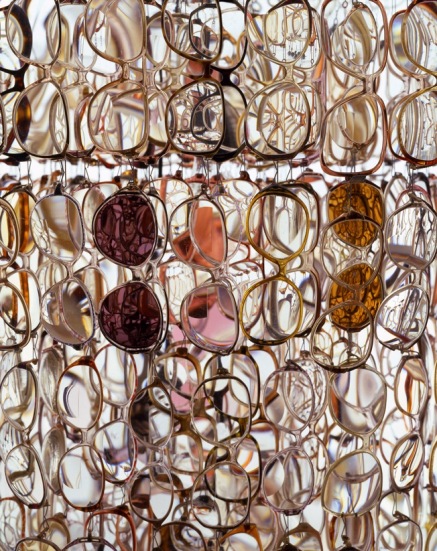 As this detail shows, each pair of glasses is strung to the next, in the end forming a chandelier that is more than 3 feet in diameter and 7.5 feet tall. The light is refracted through several layers of lenses, creating an effect almost like a mirror ball. Talking about using these unusual objects, Haygarth says: “By using prescriptive spectacles which were once an essential tool for seeing, an interesting analogy is drawn between their old and new purposes.” 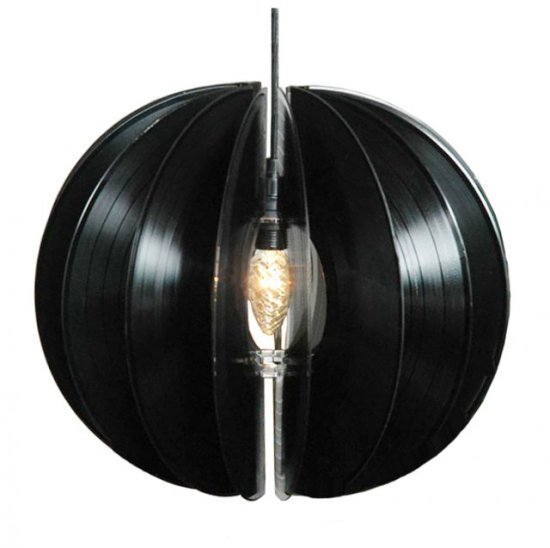 Though technically not a chandelier, but rather more of a lamp, we found this next design so ingenious that we had to include the “Record Ball” in our list. Designed by Form Nasielsky, who brought us the wine glass chandelier, this lighting ball pendant is made of repurposed vinyl records — eight-and-a-half to be exact! According to the designers, replacing the 15-watt bulb is easy, and cleaning the lamp even easier — you just use the same soft cloth that you would for your record collection. If something as elegant as a chandelier — typically associated with only the noblest of materials — can be recreated in, well, anything — even castaway or waste products — then surely there is no limit to creative recycling and repurposing. It’s time we revised our idea of what constitutes a classy material and added plastic to the mix, hopefully thus preventing it from being thrown onto landfills. Sources: 1, 2, 3, 4, 5, 6, 7, 8, 9, 10, 11, 12