When Plants Grow Out of Old Manga Comics 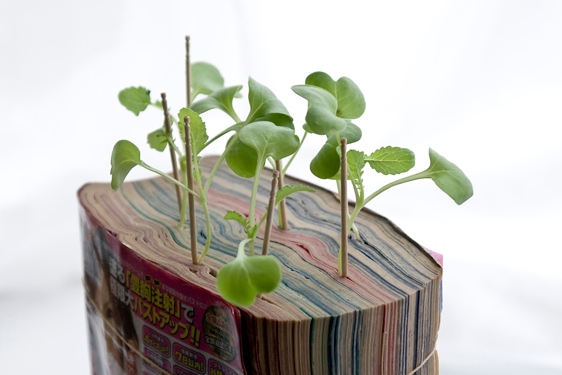 All images courtesy of Koshi Kawachi and used with the artist’s permission.

Manga publishing is big business — in 2008, the manga market in the U.S. and Canadian alone was valued at $175 million — and with the medium covering a huge range of genres, and doing it in some style, it’s easy to see why. This begs the question: What happens to all those faded comic books when they’re no longer wanted? Many find their way into secondhand bookstores, while some no doubt meet their maker through the paper recycling industry. Yet, seizing on this globally influential cultural staple from his homeland, one Japanese creative has dreamed up an ingenious new use for old manga comics, giving them a new burst of life — in the shape of plant sprouts growing inside them! 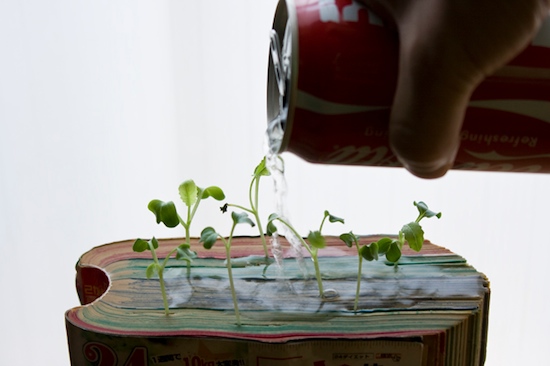 “Manga Farming” is the brainchild of Koshi Kawachi, a Tokyo-based artist. The concept is simple: Take an old manga comic book and place it upright in a dish; sprinkle some plant seeds of your choice on top (radish seems to work well, but buckwheat, broccoli, rocket and basil would surely do); and water them. 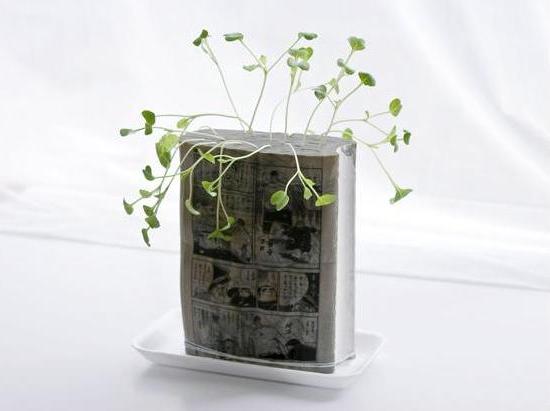 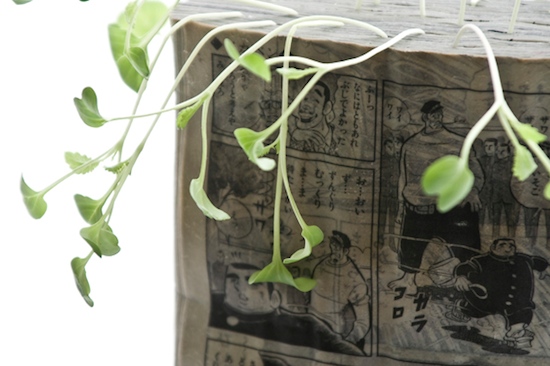 Next, make sure your manga plant pot stands in a sunny and airy spot. Then wait. After a few days, you should see the first results: happy sprouts peeking out from between the printed pages. We’re sure it works with superhero comics just as well, by the way, or any book for that matter. But, you have to admit, manga comics give the whole experiment a certain flavor of exotic cool. 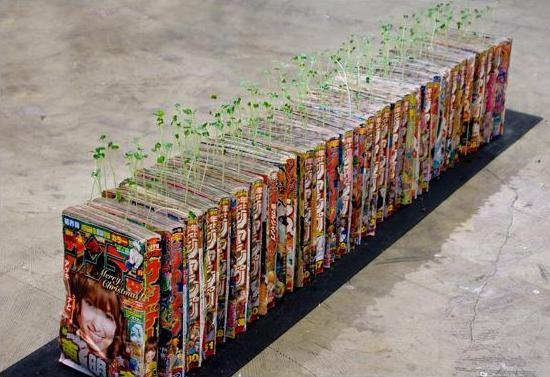 Does this all sound too greenishly good to be true? Well, Kawachi recently proved that it could be done by cultivating a host of such manga plants at the Matsuzakaya department store in Nagoya, Japan — under artificial light as well. 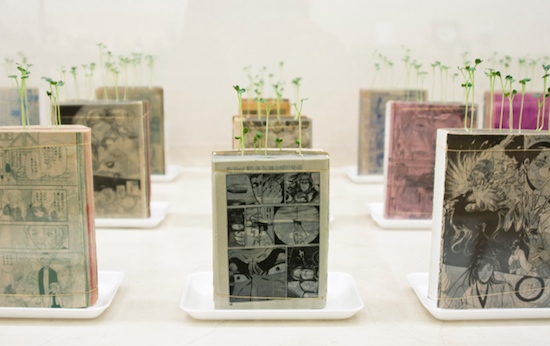 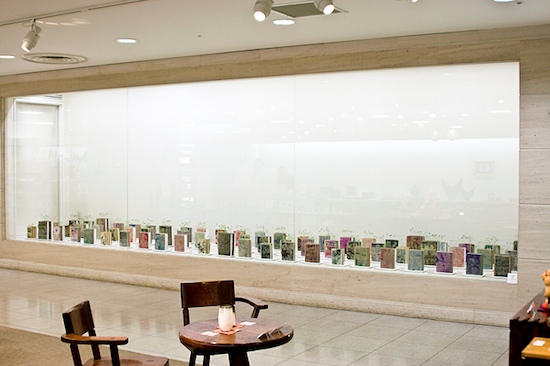 Reactions ranged from admiration for the clever idea to horror at the sacrifice of perfectly good manga comic books. Others suggested this treatment for any (comic) book with a weak storyline. And if your old comic books are getting tatty and look like they might be destined to be ditched, what better way to imaginatively upcycle — literally allowing new life to flourish in those old pages. 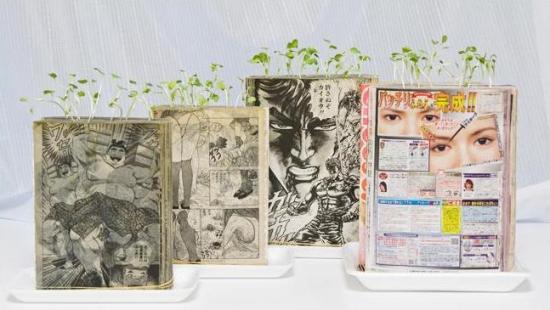 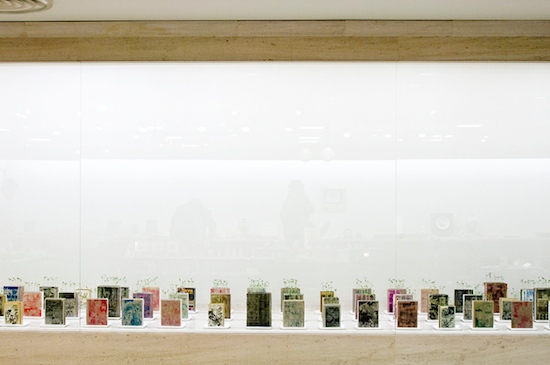 The idea opens up a whole new range of possibilities for book recycling and indoor farming. Paper is potentially a wonderful fertilizer and planting ground, and according to an USDA study, pulp and paper waste recycling to produce fertilizer is very much the need of the hour: “The U.S. pulp and paper industry produces 5 million mg of solid waste each year in the form of sludge. Currently, most of this waste is landfilled.” 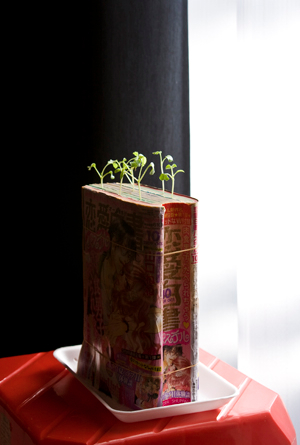 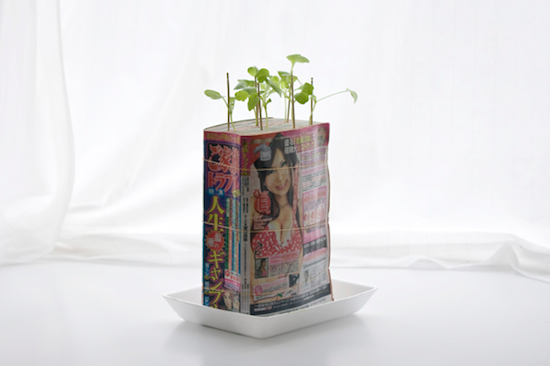 That’s a whole lot of waste there! However, it’s not as easy as one might think to work around it. A common problem is that the nitrogen content of pulp and paper sludge is quite low and its use as a fertilizer is thus hampered. That said, processes that can enrich such sludgy waste using bacteria and wood decay fungi are being developed. And the ink? We’re sure environmentally friendly options like soy ink could be used more and further the cause of recycling paper for use as a fertilizer. 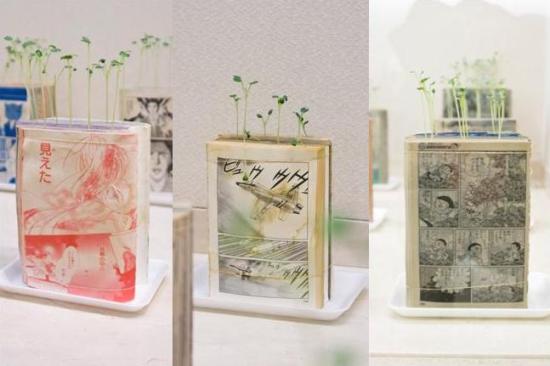 As for the sustainability of manga farming, well, we would assume that the comic books give way at some point and need to be tossed away, although the plants should have developed sufficient roots by then to be repotted! 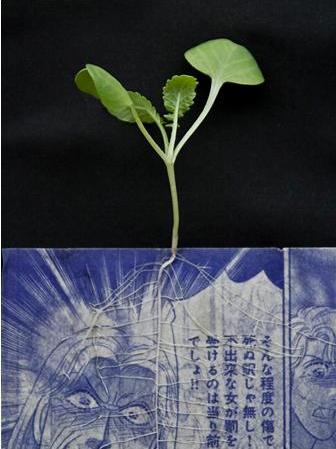 Are you into the idea of a pot decorated with old comic book pages? That’d be up to you, but with manga fueling the imagination, the possibilities seem endless. We just know that the plants love all the extra attention. 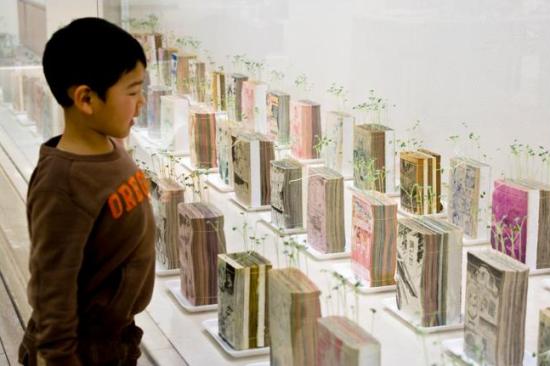 Kawachi is a versatile artist whose work has been exhibited in numerous solo and group exhibitions in Japan and New Zealand. Waste and recycling are themes in his work, and food, often in the form of popular snacks, also plays a central role in his installations — for example, in the form of little Buddha statues made out of Japanese snacks, an edible “diamond” ring and embalmed potato chips. It’s a fun and eclectic mix, so make sure to check out Koshi Kawachi’s website. Sources: 1, 2, 3