The Valley of the Sun’s Eco-Conventioneer Mecca

In a region known for its heat, the Phoenix Convention Center is keeping it cool and green. 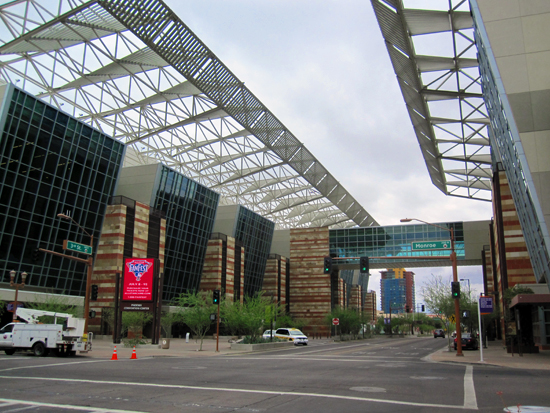 In recent years, Phoenix has begun to snap up rights to various conventions, trade shows and sporting events from traditional warm-weather winners like Las Vegas, Orlando and even its suburban cohort, Scottsdale. The reason? A host of eco-upgrades to the Phoenix Convention Center (PCC) that includes the LEED Silver-certified West Building, which opened in 2006, and the newest wing, the North Building, built to LEED standards in 2009. Conventioneers and events promoters are taking note. In less than five years, the new green additions of the PCC have attracted Greenbuild, the NBA All-Star Jam Session, Phoenix Comicon and the MLB All-Star Fan Fest, which will take place this July. The additions, built to the north of the original PCC structures, take downtown Phoenix’s Sonoran Desert location into the utmost consideration. Towering shade structures, which are an actual rarity in these parts, dip over the sidewalks and onto the streets, gently cooling the massive structure. The West Building boasts the largest photovoltaic energy plant in Phoenix’s central core, right up on the roof. With 334 days of sunshine per year, the potential for serious energy savings is through the roof — literally! The photovoltaic plant generates enough energy to use within the convention center to cut carbon dioxide emissions by 95 metric tons per year. Picture this: The plant creates the amount of power needed to fuel 12 to 14 regular-sized Phoenix homes and offset energy purchased and consumed by the local utility company. But solar is only one environmental concern at PCC. PCC prides itself on its recycling practices, and rightly so — it is a model citizen for other convention centers around the country to look to for inspiration. 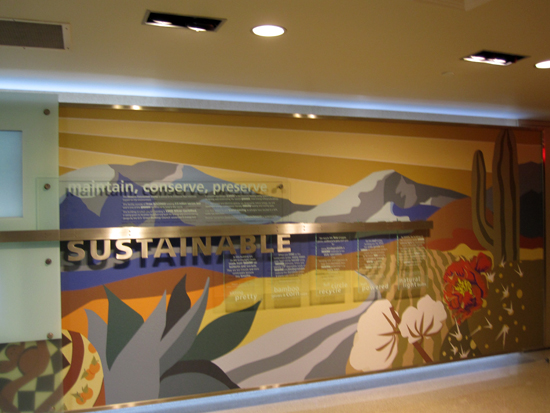 Within its walls, plastics, paper, cardboard and glass items can all be deposited in numerous collection bins. Behind the scenes, the office spaces in each building are equally equipped with recycling bins. Elsewhere still, water, sod, wood pallets, cooking oil and more are all gathered for recycling purposes. Between 2006 and 2007, PCC recycled upwards of 1,300 tons of materials — and the facility has since seen an increase in yearly attendance numbers. In the food court, on-site coffee stands and restrooms, visitors will find biodegradable and recyclable materials every day — including 40% post-consumer paper products. This is a commitment to sustainability, both of the earth and the facility itself. The West Building is the proud home to 14,000 KI Daylight chairs, made of recycled car batteries and seatbelts. You can’t make that claim in Orlando! The exterior itself features beautifully carved local stone and mineral surfaces, as well as certified wood products. The Habitat Water Harvesting Garden uses condensation from the building’s air conditioners to water the plants in and around the facility. In keeping with the water conservation theme, the buildings are outfitted with low-flow fixtures and toilets. The eco-list at PCC could go on and on, from the low-VOC paints used, to the efficient office equipment specially sought for the building. Yet here, in a metropolis brimming with sunshine as much as its accompanying heat, one of the biggest buildings in the city is also one of the greenest. Kudos, Phoenix.