The earth-friendly label, headed by Jack Johnson, conserves every step of the way, from album production to worldwide tours.

Despite whatever craziness may be happening around the world and within our own personal lives, music is a powerful elixir, capable of making it all seem just a little bit better. Even as the bills pile up and the car breaks down for the third time this year, popping in a stress-relieving selection by our favorite artist is quite like experiencing yoga-induced enlightenment. That musical Zen moment has the power to not only calm and center us, but also to encourage us to keep on keepin’ on. Which is why, in spite of the economic climate, there is one luxury that many of us will always make room for in our budgets: attending a live concert. Among the top grossing performers last year, it’s hardly surprising that Lady Gaga, Bon Jovi, Dave Matthews Band and U2 were at the top of the heap, but despite all of those good vibes that they spread, there’s an unfortunate eco-consequence to their stage shows: the dreaded colossal carbon footprint. 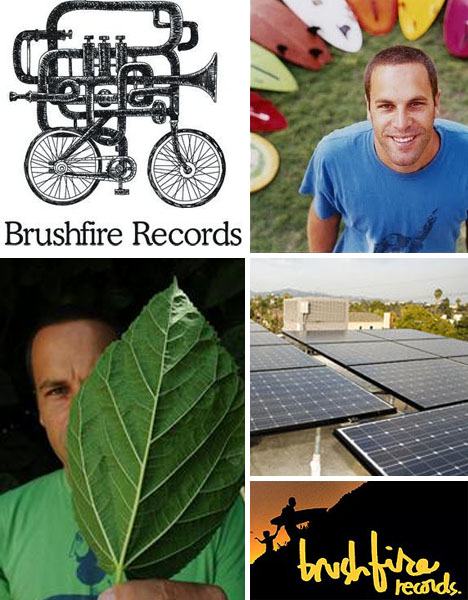 U2 is intimately familiar with this conundrum ever since they were accused of consuming so much energy during their 2009 world tour that they could have kept a single light bulb illuminated for 159,000 years… or made a round-trip journey to Mars.

Being an international musician, however, isn’t easy to pull off unless one consistently circles the globe to visit their fans and makes certain, shall we say, planet-unfriendly compromises, in order to be a part of the biz. Not entirely so, says Jack Johnson, everyone’s favorite melodious surfer dude with a chill, green attitude. In addition to utilizing two solar-powered music studios (Los Angeles-based Solar Powered Plastic Plant and The Mango Tree in Hawaii), Johnson operates an eco-friendly record label called Brushfire Records while also touring as sustainably as possible. For a reminder of how to conduct the music business the eco-way, look no further than this green tycoon who has proven through his daily actions that making a real difference is all about vision, drive and consistent execution: Location of Brushfire Records: Larchmont Village in Haleiwa, HI Proprietors: Famed surfer, filmmaker, singer-songwriter and environmental activist Jack Johnson (remember Bubbly Toes?) and music video director, documentary filmmaker and photographer Emmet Malloy Date launched: 2002 Eco-features of Brushfire Records’ recording studio: Eco-friendly features of Jack Johnson???s tours: