A rural location with poor access to materials did not stop one Chilean architectural firm from building a great green home using recycled materials.

Recycling the materials that were once used for other architectural applications is nothing new — take Hadrian’s Wall, for example. Reputed as being northern England’s once illustrious 75-mile-long Roman military defense strategy, construction on the 10-foot-high squared stone and turf structure, which framed the England-Scotland border, began in AD 122 and took a full six years to complete.

As impressive as it was, it fell into a state of disrepair as the centuries wore on, and frankly, no one really needed a wall cutting through the countryside anymore. Appropriately enough, people then began harvesting its carefully stacked rocks for a number of diverse building projects, including the creation of 18th-century roads and homes. While today, its significantly stubby remnants are protected as a World Heritage Site, the countryside is bursting with Hadrian-spawned structures that serve as a tangible reminder that the concept of recycling is literally as old as the hills. Day in and day out, reincarnating that which once saw better days happens all around the world. A fantastic example is seen in the efforts of Chilean architectural firm Juan Luis Martinez Nahuel. 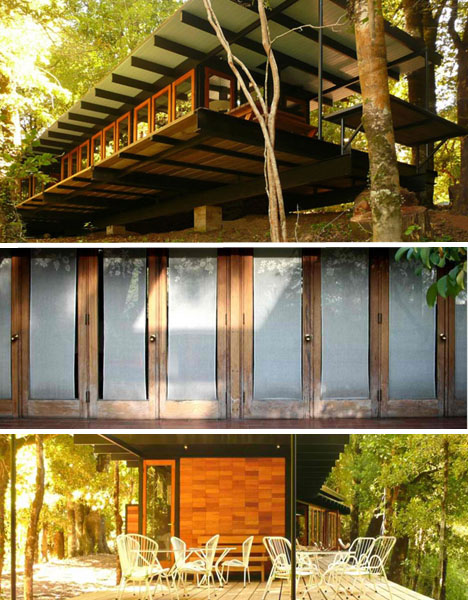 In 2007, the group began construction on a single-story cottage located in Valdivia Province (nestled in the woods outside of Pirihueico Lake in southern Chile) that, due to the remote location of the building site and compromised access, forced them to get really creative with the type of materials they chose. Rather than trucking in trendy and cost-prohibitive materials from exotic regions, they managed to craft a truly eye-catching, cozy and infinitely sustainable structure using items that were culled from previous projects: 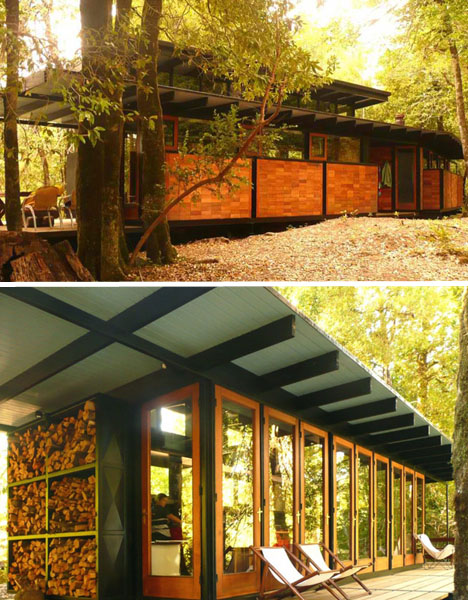 The result is an earthy yet sleek, modern-looking refuge nestled amid a thicket of greenery that appears to be so symbiotic with its surroundings that it almost blends in. Worth noting is the fact that great care was taken to respect the trees surrounding the building site — so much so that the exterior decking was notched to accommodate the trunk of one particularly well-established specimen (hardly surprising for a dwelling constructed largely of recycled materials, but nonetheless smile-worthy). As the Juan Luis Martinez Nahuel firm has demonstrated, style is certainly not sacrificed in the pursuit of sustainable home construction. It almost seems safe to say that it can be substantially enhanced, not only with eco-friendly panache, but also with plenty of heart. Unlike the cookie-cutter construction projects that typically dominate our global landscape, this “little cottage that could” most certainly does make an unforgettable mark thanks to the infusion of recycled architectural character throughout its hallowed halls and great green walls.