Guerra de la Paz’s sculptures get personal because they are made out of the discarded camouflage clothing of the millions of faceless soldiers engaged in battle every day. 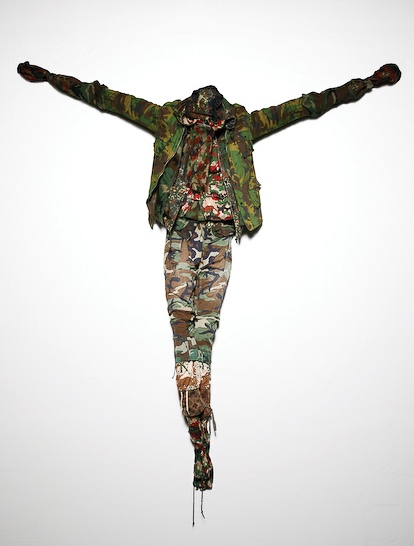 Behind the intriguing name Guerra de la Paz (literally “War of Peace”) stand the artistic duo of Alain Guerra and Neraldo de la Paz. The Cuban-born American artists have been working collaboratively since 1996 and are currently living in Miami. For their “Camo” series — featuring various human figures in poses of suffering or ironic jeopardy, and all made out of camouflage clothing — the duo dug heavily into army surplus outfits as their medium, finding uniforms that often still carried the names and ranks of the soldiers who once wore them. Many questions are raised, not least pertaining as to what might have happened to those soldiers and where they might be now. 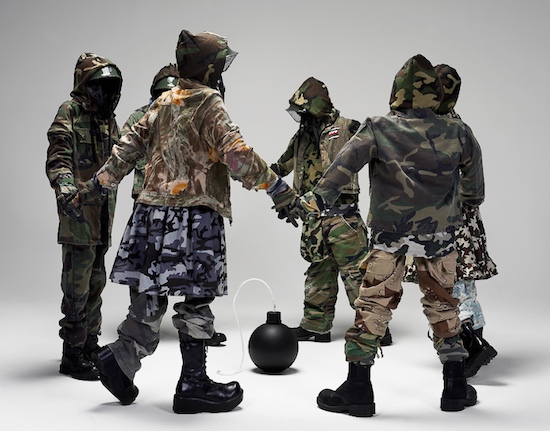 Ironically, the uniforms the duo found often lay right next to fashionable camouflage clothing items on sale for civilians to buy. It’s interesting to note that, in the U.S. alone, the total weight of old clothes donated to charity each year reaches a staggering 2.5 billion pounds, most of which (about 80%) is shipped to countries in need, worldwide. 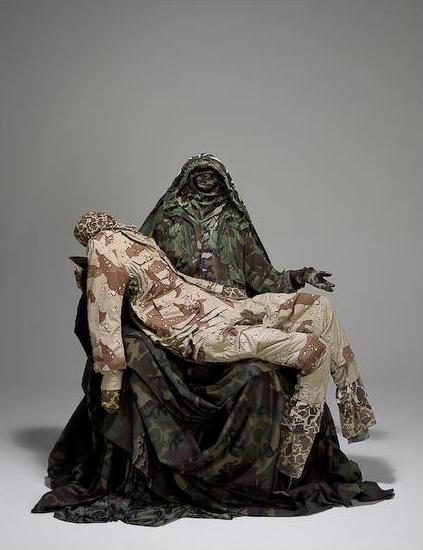 The series, consisting of 11 installations, was actually created over the course of several years, between 2003 and 2008. The artists drew their themes from a diverse range of subjects, including classical sculpture and Renaissance painting (“Pieta,” “Three Graces”), religious traditions (“Mother and Child,” “Martyr”), mythology (“Little Atlas”), nursery rhymes and popular sayings (“Ring Around the Rosy,” “When It Rains It Pours”) and popular culture and news (“Mandown,” “Crawl,” “Babyboom”). In each case, a juxtaposition is posed, contrasting the scene that has been created and the materials in which it is rendered. Outlining their method, Guerra de la Paz say: “Originally, we collected camouflage as ground cover for our larger landscape installations. We amassed so much that we figured they were special and started separating the camouflage. This was happening when the USA was in conflict abroad and there were national issues at war. We started to go through the clothing where we would find bullets, notes, photos and other personal items. Our approach is to represent the soldier as an individual — not by name or rank, but as a human.” 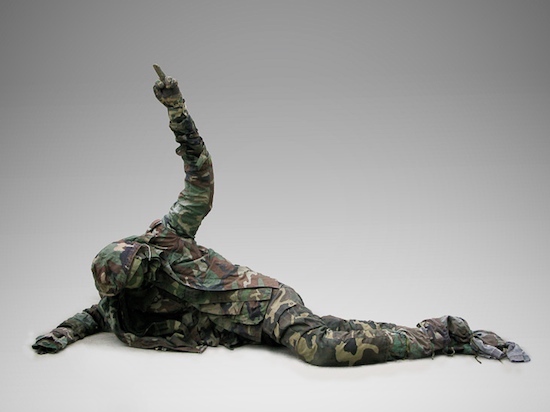 The artists explain their direction: “Our work is based on a combination of traditional disciplines and experimentation with dimension and the use of unconventional materials. It is inspired by an essential familiarity with the ready-made and the archeological qualities that found objects possess, encapsulating an energy that reveals underlying meanings and depicts the significance of mass-produced refuse on our society.” “Martyr” (top) for example, was part of the 2008 New York exhibition “The Green Zone,” the title of which referred to the U.S.-occupied territory in central Baghdad that became the military forces’ new home. The visitors, after making their way through a jungle of discarded clothes, were confronted with a crucified G.I. made from rags, lit with a red spotlight. Turning soldiers into martyrs, Guerra de la Paz remind us of the heavy cost of armed conflict. 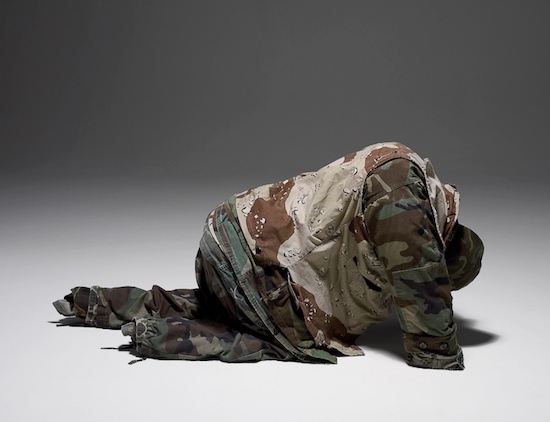 The themes conveyed question our tolerance of slaughter, torture and sacrifice in the name of war. Even children are shown as nothing but cannon fodder, born and raised in camouflage gear to fulfill their one purpose in life. Though sometimes subtle at first glance, Guerra de la Paz’s installations hit a raw nerve with viewers because of the way the artists incorporate news and contemporary issues into their work. 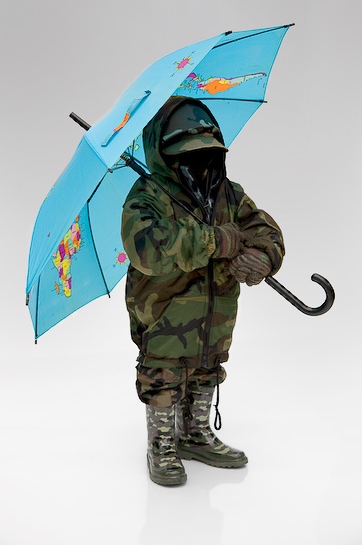 With more than a nod to Renaissance artist Michelangelo’s famous “Pietà” sculpture, which depicts the body of Christ sprawled in the lap of Mary after the Crucifixion, Guerra de la Paz’s “Pieta” (third from top) takes a masterpiece of Renaissance sculpture and recycles its message for today. A camouflaged Madonna figure, perhaps wearing a burqa, holds a Jesus figure — a dead or dying soldier also wearing camouflage — in her lap. Unlike the original, the face of this Madonna is not young and serene but ghostly and empty, like that of the millions of mothers who have cried over the bodies of their dead children, faceless to the world. 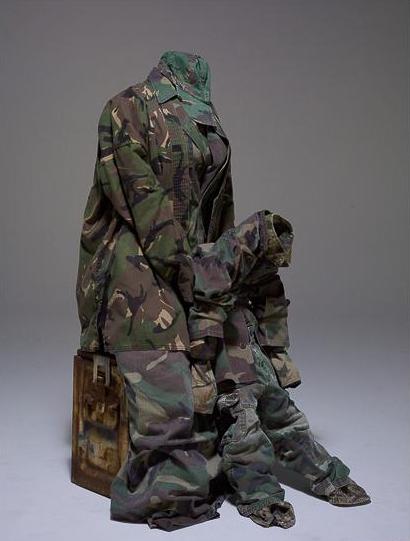 Despite the facelessness of the figures, Guerra de la Paz play with the stories that the actual clothes carry. Viewing the installations, one can’t help but wonder which soldiers might have once worn these clothes and speculate as to their current whereabouts. What turn did their fate take after being deployed in a war zone? Their clothes may have been recycled — with heart-wrenching creativity in this case — but the soldiers’ own natural life cycles might well have come to an abrupt and early end. Moreover, each soldier has a family — parents, children, friends, lovers — who all get dragged into the battle somehow. When it comes to war, sometimes the lines are blurred between soldiers and civilians. 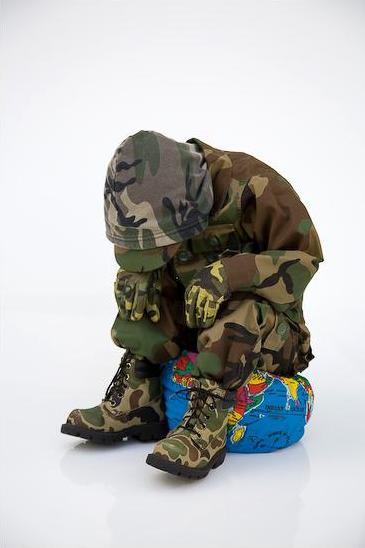 Unlike the original Atlas, the Titan in Greek mythology who was so strong that as a punishment he was made to carry the world on his shoulders (at least as popularly depicted today), “Little Atlas” (above) sits on a crushed earth, head hung low — subject and object equally deflated. Might it be because of the futility of this young camouflaged figure’s task — with so much wrong in the world that it is too difficult even to contemplate? We can but speculate, but it’s a chilling image whichever way you look at it. 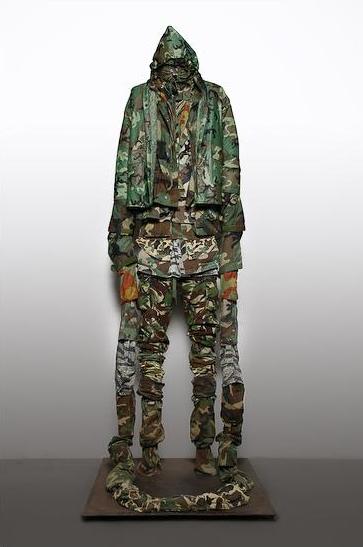 The idea of using discarded clothing started with the artists’ “Barbed” series in 1999, which saw clothing stuck on barbed wire. “Joes” (2005-06) featured G.I. Joe and military action figures in well-known scenes and scenarios that addressed sociopolitical issues. In parallel, “Camo” was developed. The artists explain: “Both series [“Camo” and “Joes”] explore the essence of the identity of the soldier, a persona that has been both glorified and demonized throughout time. We have developed a storyline that captures intimate moments of both empowerment and vulnerability. The objects begin to take on a life of their own as a sense of familiarity fades, and confusion and uncertainty take over.” 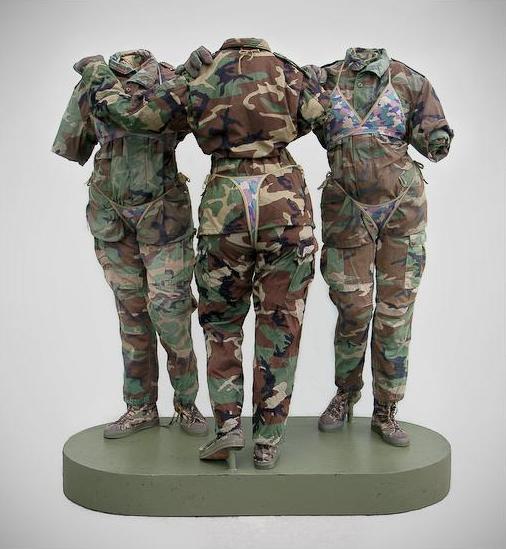 Guerra de la Paz’s “Three Graces” (above) mimics Italian artist Raphael’s famous Renaissance painting. Yet while Raphael’s Graces look dynamic if you’re comparing the postures and stances of the figures, these seem wooden and resigned. Stuffed into camouflage gear, they have donned camo thongs and bikini tops — to show what? With wry humor, that life in camouflage gear is anything but sexy, most likely. Speaking about the recycling aspect of their work, Guerra de la Paz explain: “Through a common esthetic, we create work with a universal message. [We use] recycled objects [as] our medium and the guidance of the unrelenting amount of information that fuels today’s mass consciousness and it’s subversive parallels… [This allows] us to explore ways to reinvent historic themes and classic icons while still commenting on contemporary culture.” And specifically speaking about camo: “The clothing is used, has been worn and has been discarded. The names of the soldiers that wore them remain mostly on shirts and jackets, but we remove them so the uniforms take on a universal role as opposed to a specific identity.” 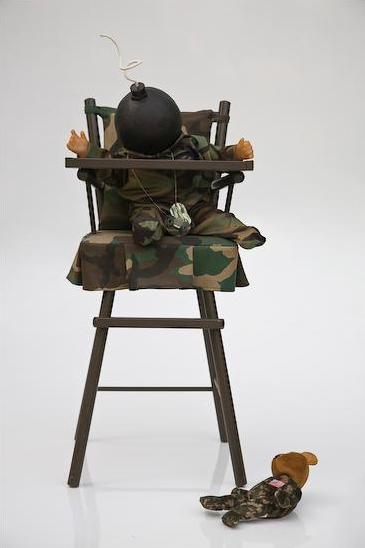 There’s surely so much more left for interpretation when it comes to Guerra de la Paz’s “Camo” series. But pondering waste and the big business that is the fashion industry, we’re beginning to wonder whether it’s really a cool trend to don crisp, pressed, off-the-shelf camo gear when there are so many people worldwide who don’t get a choice in wearing it. Like many things in life, recycling itself isn’t always straightforward. Make sure to check out Guerra de la Paz’s website for more incredible projects made out of discarded clothing. Sources: 1, 2, 3, 4, 5, 6, 7