Check out the sculptures of Nemo Gould; they’re made of everyday items, repurposed and assembled to create all kinds of monstrous weirdness — laced with a heady dose of steampunk! 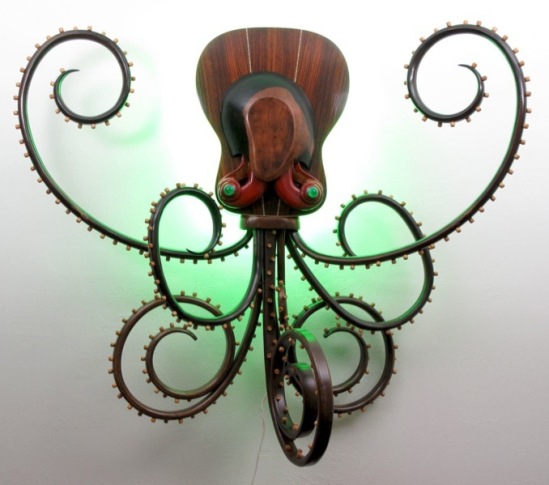 All images courtesy of Nemo Gould, unless otherwise noted, and used with permission

Dead animal heads stuck on walls are not something we’d usually promote. That is unless they’re robo-animals, made from gadgets and other objects, to be found “running wild” in any average household. Their metallic gaze reminds us that they’re no hunter’s trophies but creatures fully in control — and very much alive in a mechanical sense — resurrected as they are from the detritus of discarded household scrap. In their own beautiful, scary or just plain bizarre way, they remind us that anything is worth salvaging. 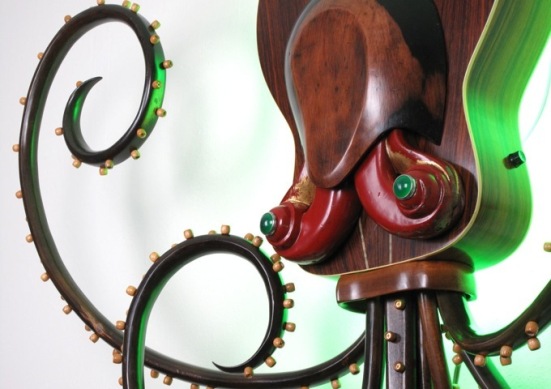 What happens if you cross an acoustic guitar with a rocking chair? You get a beautiful “Acoustapus” — what else? If you haven’t heard of this creature, it is about 44″ x 51″ x 20″ and absolutely stunning. Breeder, er, creator Nemo Gould explains how it came into being: “I can’t really say where my obsession with tentacled sea monsters comes from, but the condition is clearly present. This one gets its title from the acoustic guitar that forms its head. The sculpture hovers off the wall about 6 inches, allowing the florescent bulbs installed within to bathe the wall with green light.” We think it’s awesome! 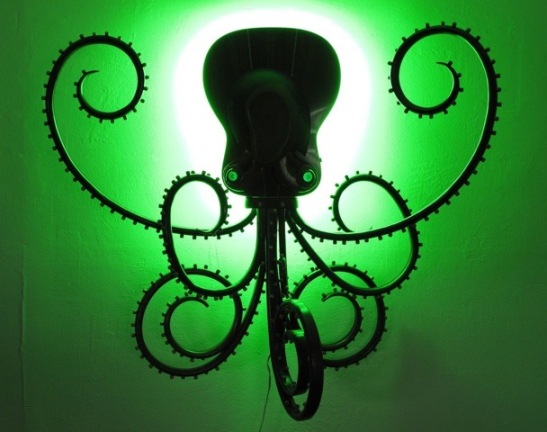 Gould credits the mythology of comic books and science fiction as influences on all his artworks, as well as “an irrepressible tendency toward collecting and works dismantling anything with moving parts.” Acoustapus, for example, apart from the guitar and the rocking chair parts, was made from chair arms, a salad bowl, beads, some light fixtures, several brass screws and aluminum parts — all everyday items you might have lying around in your own home. Can you find them all? 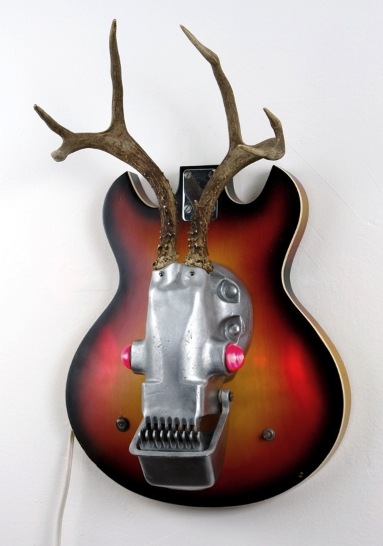 This next sculpture is titled “Heavy Metal.” Why? Well, that should be obvious when you realize that it is an electric jackhammer forged together with an electric guitar. Other materials used in its creation included vacuum cleaner and engine parts, a toy motor and LED lights. Oh, and antlers, of course. 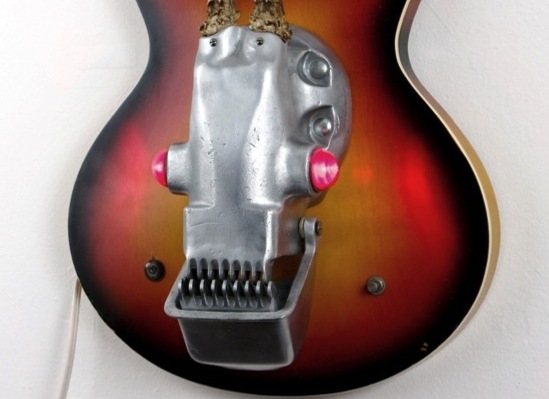 Talking about his search for the perfect used object, Gould says: “What makes a thing fascinating is to not completely know it. It is this gap in our understanding that the imagination uses as its canvass. Salvaged material is an ideal medium to make use of this principle.” 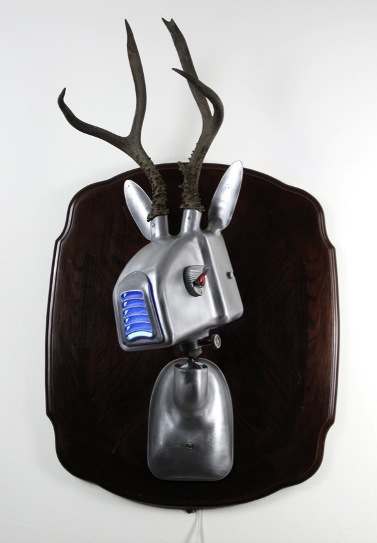 If you’ve ever doubted that a slide projector casing can look like a deer caught in headlights (we wake up with this thought every day!), take a look at this sculpture and reconsider. Only the antlers are real; the rest is equipment, polished to a matte metallic sheen. Two garden trowels make up the pointed ears, red LEDs the distinctly evil-looking doe eyes and projector slits the snout. 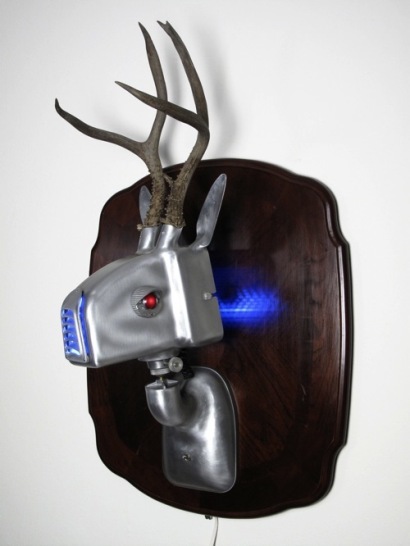 The 36″ x 22″ x 16″ sculpture, entitled “Trophy 2010,” is mounted on an old coffee table top, polished to shine. Others parts that were used include an optical equipment stand, golf caddy cart parts, a ball socket mount and a light bulb. The coolest feature — get this — is that the head position is adjustable. So, can slides be shown? Nah, but we wouldn’t be surprised. 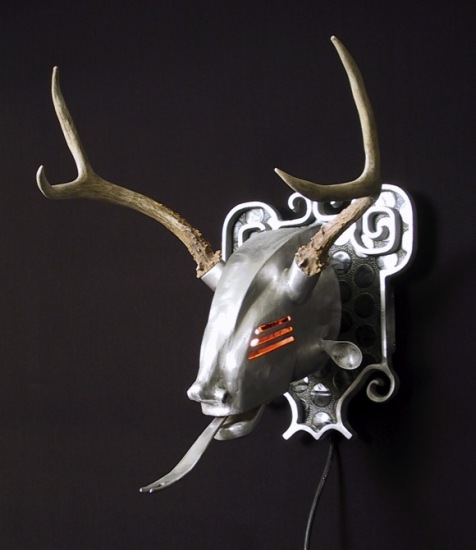 This next sculpture, created seven years earlier in 2003, was one of Gould’s first pieces to employ the trophy theme, but instead of looking somewhat menacingly cute like the deer, it looks positively scary, with its forward-pointing antlers (ready to gore the casual observer?), red eye slits and tongue sticking out (part of a salad tong(ue), by the way). 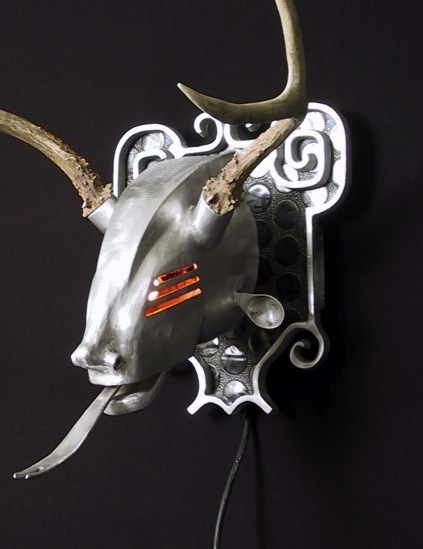 The mounting plate once belonged to an ornamental gate, the head came courtesy of a vacuum cleaner, and the ears once were measuring spoons. Add some vinyl, plywood and measuring spoons and you got one butt-kicking deer trophy. Now that’s repurposing that is really leading the charge! 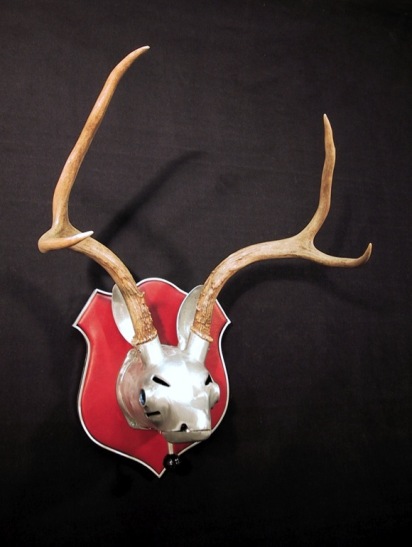 This 18” x 15” x 13” “Jackalope” was created by Gould in 2002 from antlers, vacuum cleaner parts (he sure goes through vacuum cleaners fast), salad spoons, a shoe form, doll eyes and some vinyl, stock aluminum and plywood. 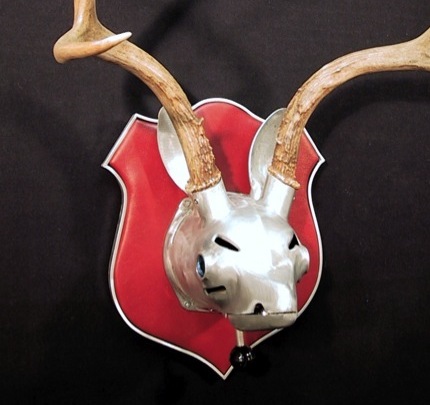 The idea behind it? Well, we’ll let Gould tell you that himself: “Whoever first thought of sticking antlers on a stuffed rabbit’s head was ahead of their time. A real sick visionary. I couldn’t resist giving it a try. Pushing up and down on the lever under its head opens and closes the mouth.” Cool! But maybe not while we’re eating. 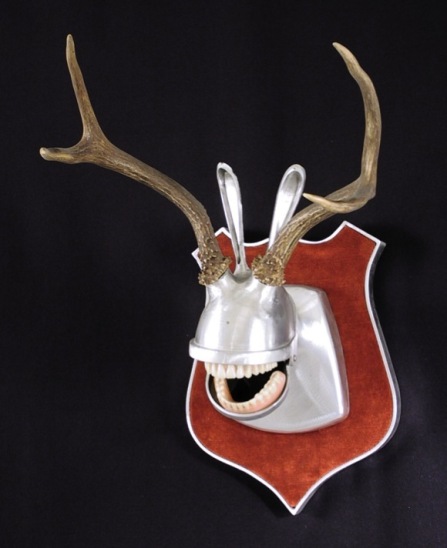 It didn’t end there, either. Here’s an improved version made (re)using a meat grinder, cheese slicers and dentures, among other bits and bobs. Gould says: “[I] can’t get enough Jackalopes. There is something particularly creepy about not only hunting an animal for sport, but actually attaching body parts to it that it did not already have. This one has an articulated jaw on a spring, so you can open and close his awful mouth.” That’s creepy all right! 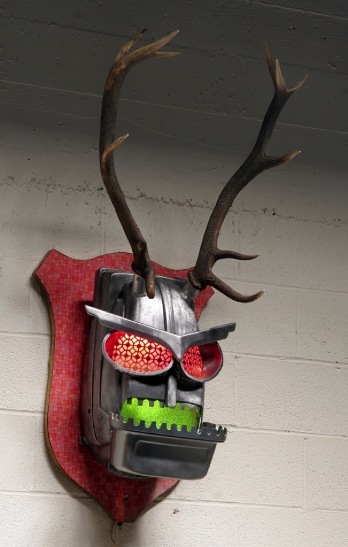 Speaking of creepy, “Big Game,” above, is a 48″ x 21″ x 18″ trophy that incorporates huge elk antlers, as well as an outboard boat motor cover, vacuum cleaner bag attachments and a barber chair footrest for a head. Lit by red and green bulbs, this sculpture is definitely on the evil side. If the mounting board looks familiar, it was once an old kitchen countertop. 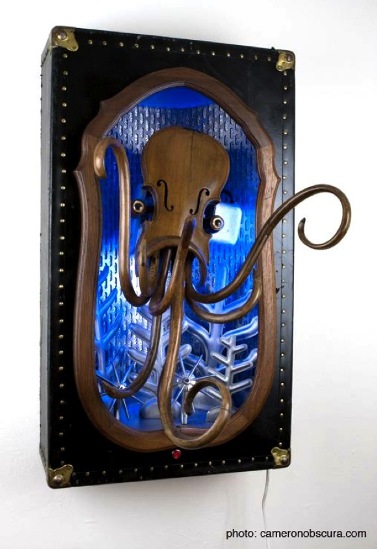 Coming almost to the end of this bizarre menagerie of a post, we’re returning to the octopus and musical instrument themes with this 36″ x 21″ x 21″ piece, named “Octovarius,” which is made out of a violin and chair parts, now tentacles that move individually. How cool is that? Other parts used include an old steamer trunk for the mounting case, tobacco pipes, taxidermy eyes (creepy and effective!), steak serving platters, a motor, a semi-truck exhaust guard and cold cathode light tubes. A stuffed octopus head might be an unusual trophy, but it feels right at home in the world of steampunk. We love it! 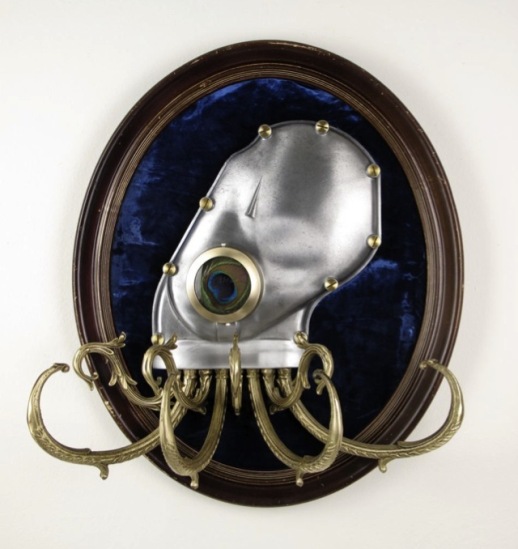 Last but not least, here’s “Deep Blue,” another steampunk cephalopod, created in 2010. An old engine gear case makes up the head (or is that the body?), chandelier parts form the tentacles, and there’s also a candle stick base, plus a picture frame and velvet for the background. Particularly clever is the use of a peacock feather under a magnifying lens, giving the creature one huge, beady eye. Now stop staring! 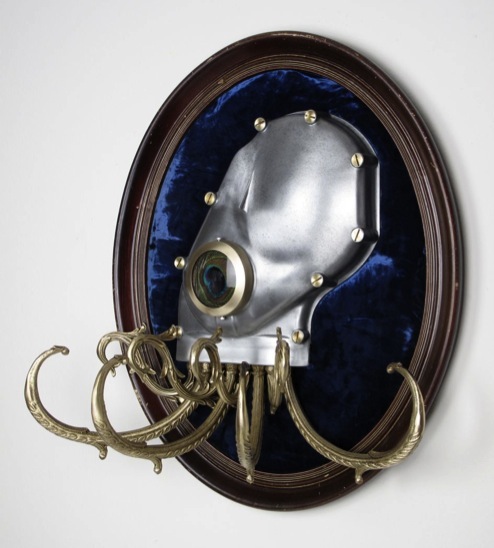 Gould received his B.F.A. from the Kansas City Art Institute in 1998 and his M.F.A. at UC – Berkeley in 2000. His work has been shown in galleries and museums throughout the U.S. and overseas and gets frequent attention in the media. A visit to his website will bring back the world of wonder often so lost to adults. Though we could look at robo-trophies all day, it’s now time to take inspiration from Gould’s work, get creative and scout the supply cabinet in the office for potential robo-animal parts. A steampunk trophy for the office is a must-have. Repurposing win!