Nemo vs. the Giant Squid Brought to Life in Recycled Junk 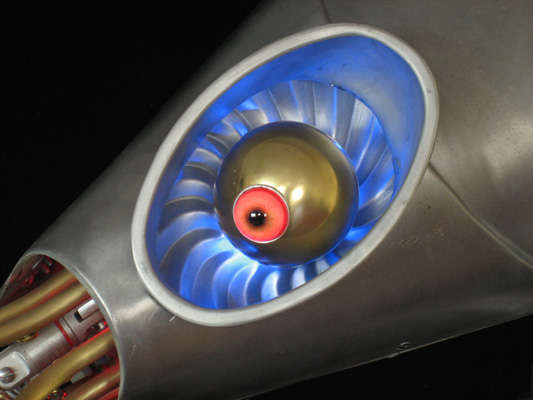 It was a dark and stormy night. Captain Nemo stood by the porthole, pipe in the corner of his mouth, studying the movement on the ocean floor. Suddenly, the world went dark. Slimy tentacles gripped the Nautilus and wound tightly around the tiny submarine like ropes made of steel. “The Kraken!” thought Nemo, grabbing the nearest weapon — a knife usually used for scaling fish. So would ensue one of the most epic battles of man versus beast in the history of fiction. 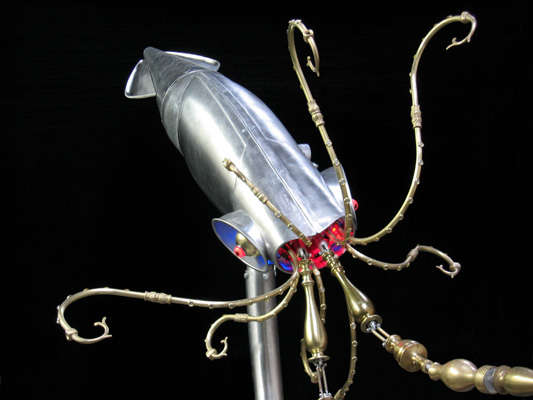 Few books have captured the imagination of readers and inspired so many spin-offs as Jules Verne’s Twenty Thousand Leagues Under the Sea and The Mysterious Island, written in 1870 and 1874, respectively. Both feature Captain Nemo, an eccentric scientific genius who roams the bottom of the ocean in his submarine. Artist Nemo Gould identified with the Captain from an early age; not surprising, given that he’s carried the name Nemo since birth. 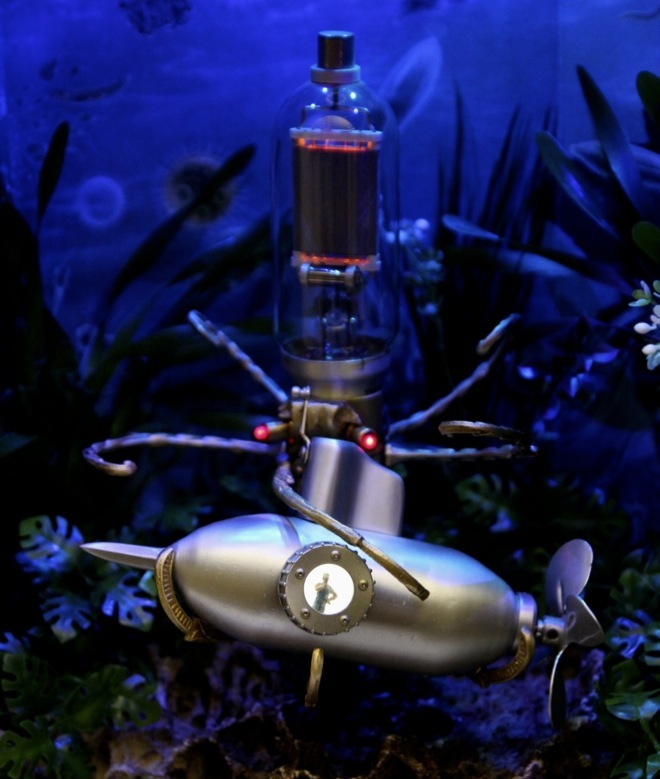 Captain Nemo’s encounter with the Giant Squid and other sea monsters are recurring motifs in Gould’s work. He executes such scenes masterfully, creating sculptures, which are often mechanical, out of repurposed items found around the house or salvaged from garage sales and junkyards. A commendable feat, as all of his sculptures are thus 100% recycled. 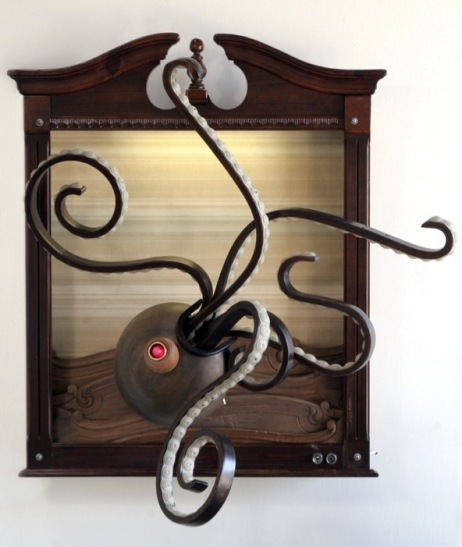 “Waste Deep,” for example, is a tentacled sea monster created out of rocking chair parts and an old salad bowl. The creature’s powerful suckers have been convincingly created from what once was a bath mat. Smart! The sculpture is mounted on an old bedroom mirror frame plus headboards, and supplemented with wallpaper, curtain rings, lights and a motor. Like the ocean waves, the sculpture moves gently up and down. Gould explains how the sculpture came to be: “This was the title piece for my show at the S.F. Dump. I wanted to make another large-scale sea monster to contend with my Giant Squid sculpture.” 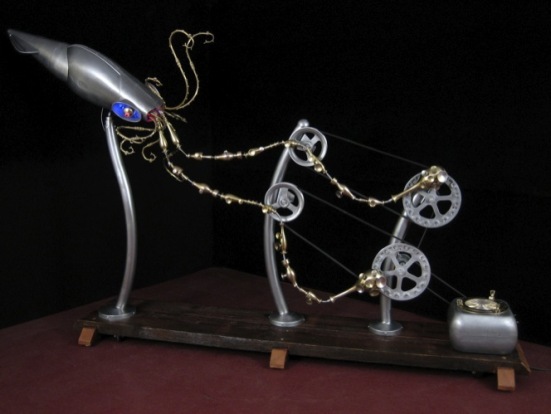 Speaking of the Giant Squid, here it is again, in all its tentacled glory. As can be seen top and above, the Giant Squid is an awesome machine, a mechanical sea monster whose tentacles move. At almost 11 feet long, however, the sculpture does not even come close to the size of a real-life Giant Squid, which can reach a length of 43 feet! Still, it’s pretty impressive! 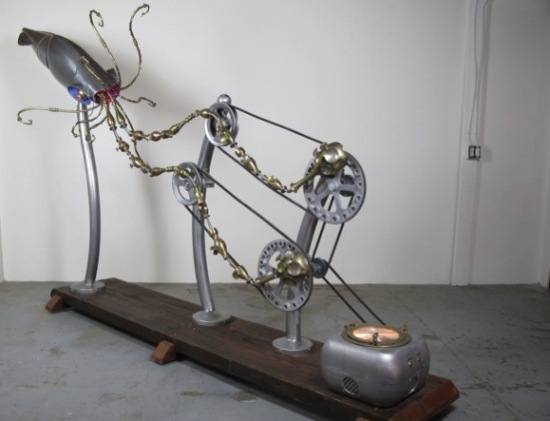 Gould has this to say about how this amazing mechanical sea monster came about: “Every few years, I try to make something large and totally impractical. I have been fascinated by the Giant Squid for quite some time. A real-life, terrifying mystery of the deep.” The three elegantly curved poles that the creature, its tentacles and the machinery rest on what once belonged to an old railing; the squid, meanwhile, is made out of street light covers, candlesticks, chandelier parts, brass fireplace hardware and other odds and ends. It sure is one amazing creation that leaves one wanting more. And there is a lot more! 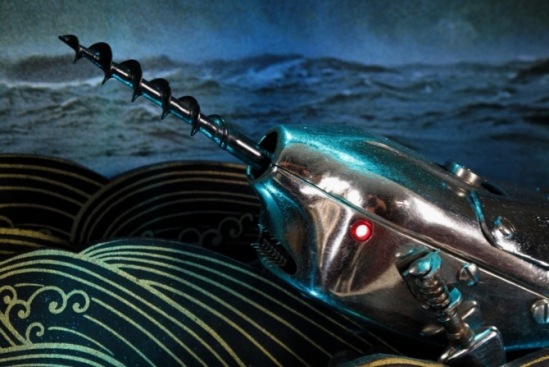 “Drill Baby Drill” introduces a narwhal into Gould’s gallery of sea monsters — an electric hair trimmer combined with a corkscrew can make for quite a ferocious depiction of the toothed whale! Add red LEDs for gleaming eyes and guitar tuners and you have a few more scary features! 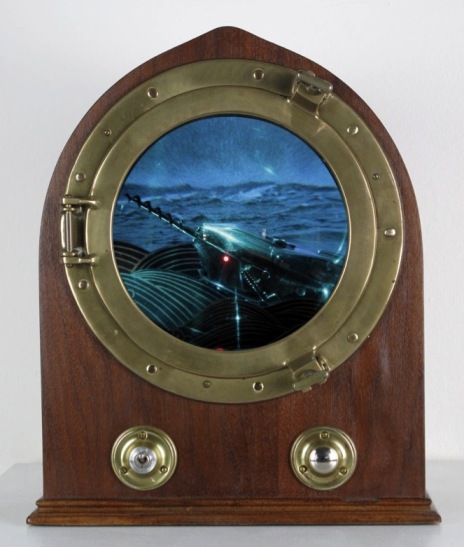 It’s a good thing that this narwhal is trapped in his diorama — an old radio combined with a portal window that seems like a porthole to the sea world. The fact the waves look dark and slick with oil is no coincidence, as Gould created the piece just after the Gulf oil spill had taken place. 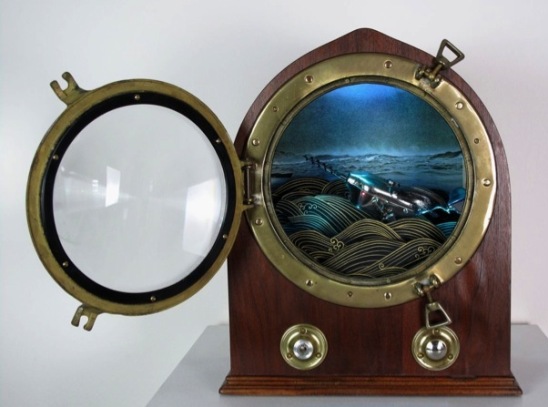 “I think all of the bad news pertaining to the oil spill in the gulf may have ‘leaked’ into my consciousness while making this piece,” he explains, adding wryly: “The creature itself seems equipped to have made the mess. Maybe it wasn’t our fault after all.” 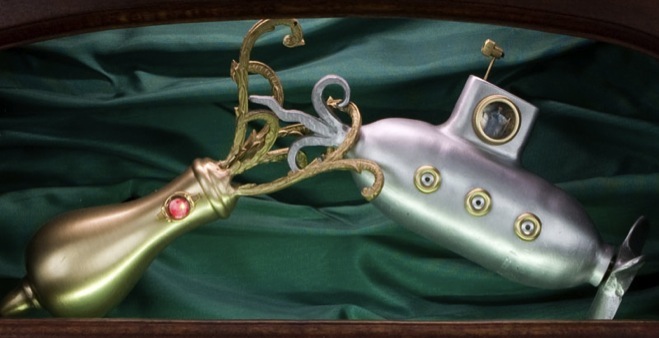 Here, you can see how Jules Verne’s drama unfolds, with the Giant Squid catching hold of Captain Nemo’s submarine, which suddenly looks even smaller. The epic scene is actually housed in an old suitcase and bordered by an old mirror frame. 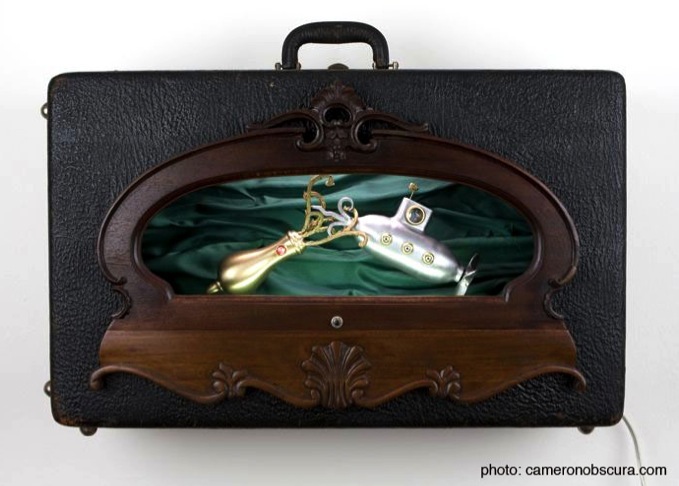 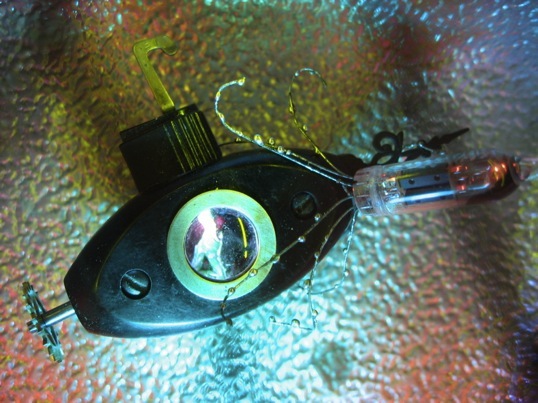 Sculptures don’t need to be big to get the point across. While this Giant Squid (made from a halogen light) is barely as long as a finger, we can just picture its transparent sliminess and tight grip — though the tentacles are mere wires. If your submarine is just an old light switch with a magnifying lens for a porthole, it doesn’t take much to shake your world to its very core. 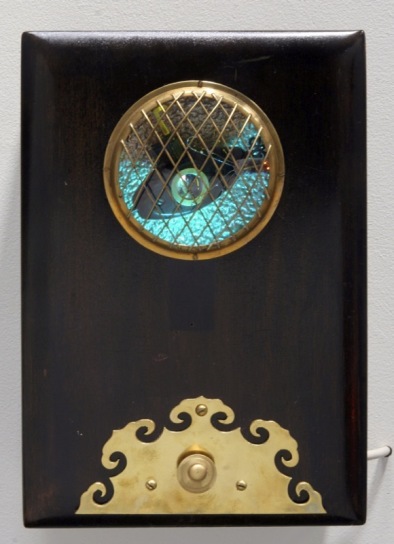 Nemo himself is just a tiny model figure, looking worried through his porthole while witnessing the attack of the Kraken. The beautiful, dark wooden box once contained cigars, and its ornaments were taken from an old brass screen. 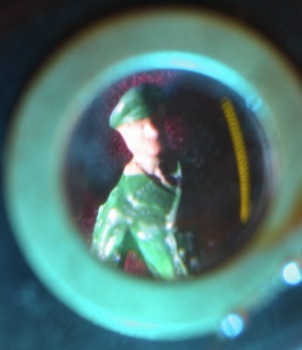 Although he certainly travels back in time in the creation of many of his sculptures, and while he uses simple electronic devices and sometimes antiquated objects, Gould does not consider himself a steampunk artist, simply because the genre is newer than his work. As he explains: “I’ve been working with these images and themes for around 20 years now… Steampunk is a fairly recent phenomenon and I find myself struggling against the impression that I’m following this new trend. It just happens that some of my work is similar to steampunk art, but for me, it is just part of a much broader life-long pursuit.” 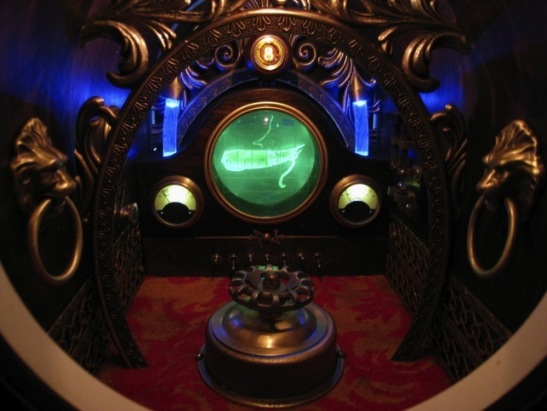 It is this life-long pursuit of devising new, clever machines with a high aesthetic value that produces these amazing sculptures, made out of fully reclaimed, repurposed and recycled objects. And if you’re wondering what the view from the Nautilus must have been like, you needn’t speculate any longer. Gould has thought of this as well and built the inside of the famous submarine as described in Twenty Thousand Leagues Under the Sea, complete with a Giant Squid outline on the radar. 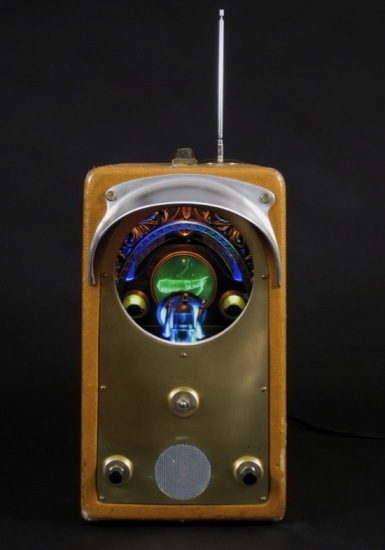 The squid, by the way, is a real preserved specimen! It’s just that the LEDs surrounding it, and the green plastic covering it, make it look like a hologram. Housed in an old sewing machine cover, many other odds and ends went into “Under the Sea” — for example, a vintage television cabinet, a clock, change sorter, picture frames, VU meters, switches, bubble levels, a tobacco pipe, gas fittings, a water valve, a runners’ trophy, indicator lights, LEDs, oscilloscope parts, a nixie tube, carpet, motors and a sound recording module. Phew! That’s some salvaging! “It is difficult to accurately capture the experience of peering into this little box. One really gets the feeling that they are aboard the vessel,” says Gould of the viewing sensation. 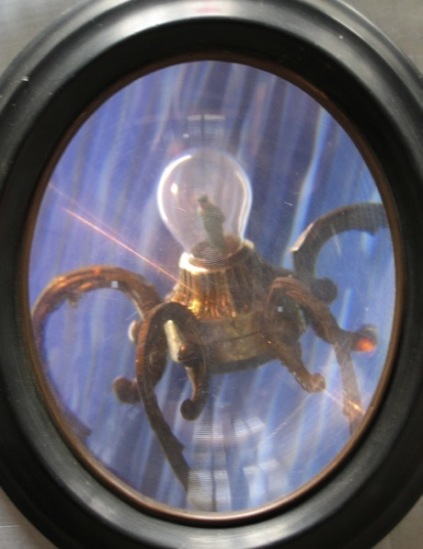 In the final project featured here, we see Gould’s idea of what a craft from the mystical island of Atlantis might have looked like… 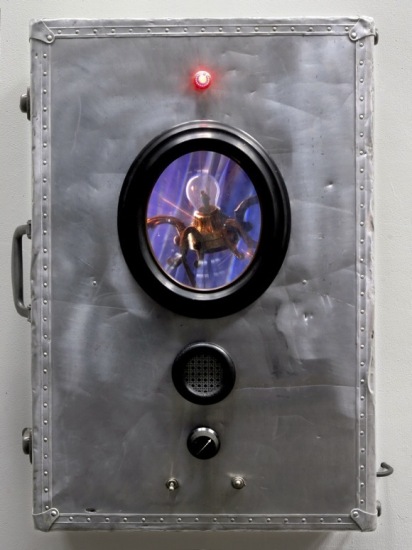 As Gould explains: “It turns out that much of man’s difficulty in finding the lost continent of Atlantis was due to the fact that Atlantis is in fact very small. This device was built to enable a delegate from the tiny sub-aquatic continent to visit our cities on dry land.” These are fitting parting words, as thus ends our voyage into magical worlds beneath the waves… at least for now. If you want to see more of Gould’s work, you know where to find it: just follow the links in the post. Additional sources: 1, 2