A national recycling leader in the ’80s, Philadelphia is at again, with a renewed focus on increasing recycling rates citywide.

Until very recently Philadelphians recycled a dismal five-percent of their trash. The city was once a leader in recycling – having passed the first mandatory curbside recycling law in the 1980s. But it wasn’t until a few years ago that city officials got aggressive in trying to make that law matter – and their approach has worked. WHYY’s Kerry Grens reports on what it took to quadruple Philadelphia’s recycling rate in just four years. 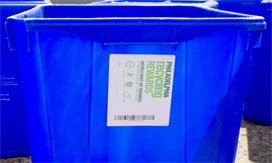 Bright blue recycling bins neatly line 45th Street on Philadelphia’s west side. William Taylor, a recycling truck driver and a reverend, treats his routes kind of like a recycling ministry. He does whatever he can to get people on board. “This is one of the better neighborhoods for recycling,” Taylor says. “They have more of a clue of what’s supposed to be in the bucket. Some other neighborhoods, they don’t have a clue.” It’s hard to blame Philadelphians for being confused. It used to be that people had to separate their recyclables: cans in one bucket, glass in another, and so on. A few years ago, the city rolled out “single stream” recycling: just one big blue bin for all recyclables. “People just didn’t know what was recyclable, says Carlton Williams, the deputy commissioner of the Streets Department. “People said, ‘I’m confused, I’m not going to figure it out anymore, I’ll just throw it in the trash.’” Williams says that attitude allowed recycling rates to stagnate for two decades. But as the green movement took hold, and the city realized it could actually earn money by selling its recyclable materials, the push was on. Single stream came first. Then the city started picking up recycling each week, instead of every two weeks. It added plastics and cardboard to the list of what goes into the blue bin. And it spent millions of dollars on trucks, bins, advertising and education. Philadelphia had a good incentive: not only can it earn money selling recyclables, Williams says, it saves money on high tipping fees for hauling rubbish to landfills or incinerators. “We’re at an all time high of $65 a ton for recycling for the city of Philadelphia. That is phenomenal. We’re paying $66.50 a ton when we’re throwing things away as trash,” says Williams. To keep garbage costs in check, and to cash in by collecting more recycled material, the city also sent dozens of city workers out roaming the streets. That’s where Kerry Withers, a SWEEP officer, comes in. “Sweep stands for Streets Walkways Education and Enforcement Program,” says Withers. In other words, he’s the trash police. Read the entire article… Source: Newsworks.com By Kerry Grens