The Truffle: A Modern Day Home-Cave for the Nature Lover

The tiny fishing village of Laxe, Spain, is home to one of the most unique recycled homes on the planet.

Some people pay a pretty penny (actually, make that hundreds of dollars) for an ugly-duckling, gnarly, wart-covered fungus that must be expertly unearthed by canines and female pigs with an extraordinary sense of smell. Highly regarded in culinary circles as the crème de la crème of pungent yet pleasingly palatable gourmet indulgences, black and white truffles are hardly easy on the eyes, but they enjoy the type of fawning that Hollywood stars and supermodels receive, which perhaps suggests that good looks aren’t all that and a bag of chips. The emergence of this mycorrhizal is hardly a random occurrence, however. In order to come to fruition, truffle spores must be exposed to the following conditions: 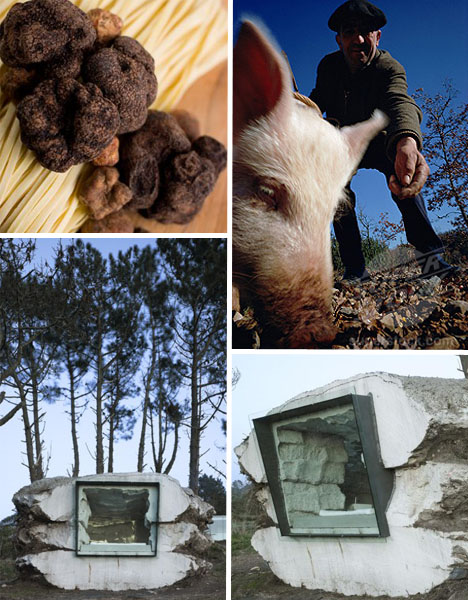 Madrid’s Ensamble Studio clearly did its homework when it dubbed its similarly earthy curiosity none other than The Truffle. The entirely unconventional single-family dwelling, which looks as though it was extracted from some sort of prehistorically petrified landmass, offers a blatant shout-out to its namesake with intentionally rough-around-the-edges decadence dotted with plain old earth. Quite like the white and black edible delicacies that often take between five to eight years to emerge, The Truffle enjoyed a slow but steady design process, first with the excavation of a relatively modest-sized section of land in the quaint fishing village of Laxe, Spain. It was there that a concrete foundation was poured and then smoothed down with hand trowels, topped with hay bales in order to mark the future interior living space of the home. Successfully executing this quirky design concept required repeatedly alternating layers of concrete, hay and soil, first by mounding soil around the perimeter of its concrete foundation and then by placing hay bales, dirt and even more concrete in ever-alternating layers. In effect, the end product was a concrete cocoon that entombed a massive amount of perfectly delicious hay (which, fortunately, Ensamble Studio didn’t let go to waste). 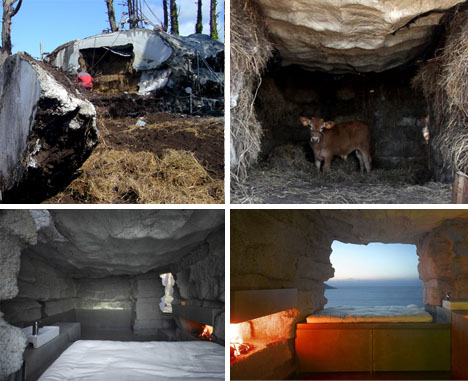 Once the entire structure was cured, the design firm excavated it, carefully perched it atop a scenic overlook, and then employed the assistance of massive quarry machinery to slice open a makeshift entrance. What could quite possibly become the future home of (perhaps) a mad genius or eccentric artiste still had a long way to go before becoming worthy of occupancy — after all, it was jam packed full of edible plant-based goodness — but a young cow named Paulina took matters into her own capable jaws. She spent roughly one year munching to her heart’s content, all told weighing in at an impressive 300 kilos (661 pounds) once her job was finally completed. Even handier, The Truffle served not only as the source of her food, but also as her temporary shelter. Though this diamond in the rough would make most people cock their eyebrows in sheer perplexity, once you get past its humble, root-entangled, dirt-dusted exterior, it boasts an oddly sheik interior. The imprint of the hay bales can still be seen in the concrete, but that organic texture serves as a pleasing contrast to smooth industrial-esque interior accents such as a built-in window seat and fireplace mantel. Overall, The Truffle, though modest in square footage, is rich in vision, execution and earthly delights.