After a successful yearlong voluntary compliance period, Brownsville has said goodbye to plastic bags, becoming the first city in Texas to do so.

Brownsville became the first city in the state of Texas to successfully pass a plastic bag ban ordinance. Brownsville, one of the poorest cities in the state, wanted to cut down on the litter of plastic bags that has been termed “Texas wildflowers” or “Texas’ new tumbleweeds” by tourists, according to Healthy Communities of Brownsville, an organization in favor of the ban. CommonDreams.org points out, “Although plastic bags didn’t come into widespread use until the early 1980’s, environmental groups estimate that 500 billion to 1 trillion of the bags are now used worldwide every year,” and plastic bags “use up natural resources, consume energy to manufacture, create litter, choke marine life and add to landfill waste.” 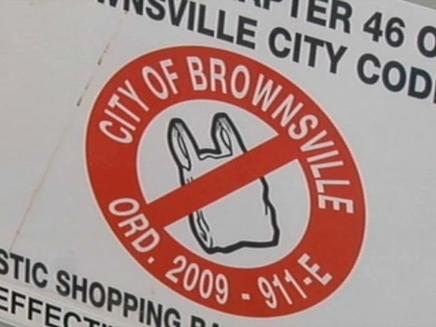 The ordinance set up a one-year voluntary compliance period, which ended in January 2011, as mandatory compliance began. It allows for the use of reusable cloth bags, approved biodegradable plastic bags and recyclable paper bags to be used in place of traditional plastic bags. Section 46-51 also sets up a seven-member advisory committee to oversee the implementation and enforcement of the new ordinance.

The ordinance (Ordinance Number 2009-911-E) lists reasons the ban was enacted: The conclusion: It is in the best interest of the health, safety, and welfare of the residents of Brownsville to reduce the cost to the city of solid waste disposal, and to protect the environment by banning the use of plastic checkout bags. Read more about the ordinance here. The Texas Tribune reports that the ban has reduced the amount of bags going to landfills by 350,000 bags per day and, according to former mayor Pat Ahumada, Brownsville has gone from “littered and dirty to a much cleaner city.” Brownsville’s ban is making an impression statewide, as well: nearby South Padre Island will enact a similar ordinance in January 2012 and Fort Stockton in west Texas will enact its ban next month. San Antonio is in the midst of a year-and-a-half anti-bag pilot program. Other Texas cities, including major metros like Austin and El Paso, are considering or planning bag bans.