Submarine graveyards like the one at Russia’s Nezametnaya Cove may have a certain decrepit charm, but they can do untold environmental damage. 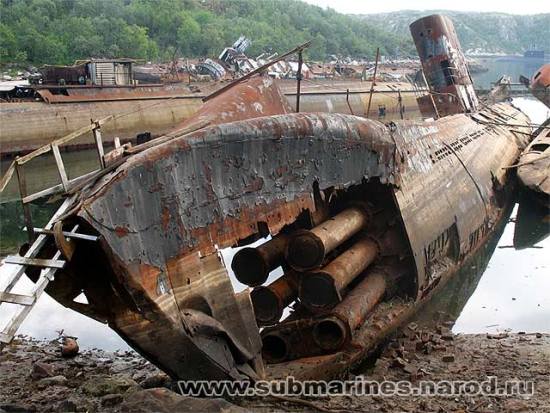 A view of the sub’s torpedo tubes All images courtesy of Ilya Mounds/submarines.narod.ru.

Half-hidden in Russia’s Olenya Bay, adjoining an off-limits naval base, lies a secret that was only recently uncovered to its full extent. In the midst of the otherwise picturesque Russian tundra — home to reindeer, polar bears, Arctic foxes, wolverines and moose — giant metal skeletons raise their great mass toward a gray sky, as if asking where they went awry to deserve their fate. 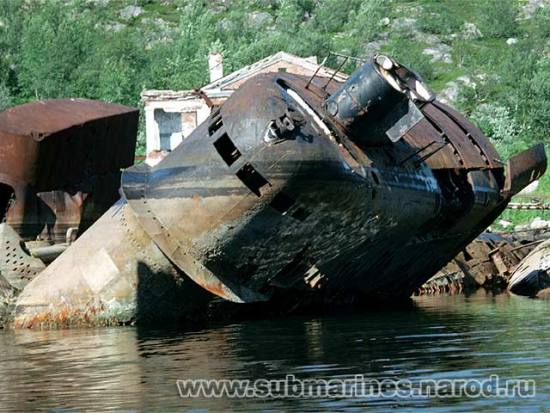 A submarine sitting askew in the water, with the remains of a Russian summer home in the background.

The area around Nezametnaya Cove, close to the town of Gadzhiyevo, in Murmansk Oblast on the Kola Peninsula, is a cemetery where many a Russian submarine has gone to die. After serving their duty underwater, the submarines were brought to this restricted-access zone in the 1970s and then forgotten. The location is high up in Russia’s northwest, not far from the Finnish border, a place where strong winds blow for a good part of the year. At a time when the Cold War was still in full swing, shipyards had a hard time fulfilling the orders they received for military ships, and there was scarcely any time to even think of properly disposing of old submarines. 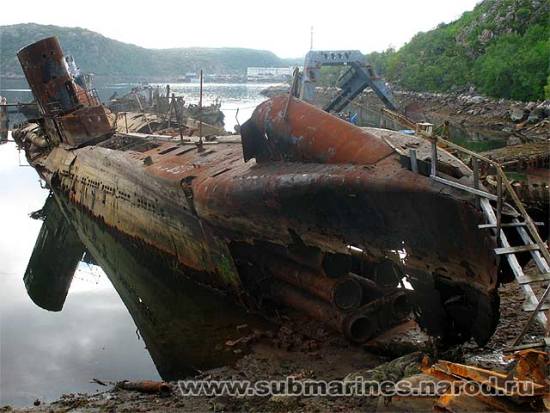 It’s said that some of the old submarines were used for target practice in military exercises and often sunk, an employment of the old “out of sight, out of mind” strategy. Others were simply left in the bay to rust and rot, floating to the surface like so many whale carcasses. Nobody wasted much thought on the stricken subs, but rust and oil from the hulls began polluting the water over the ensuing years. This prompted a recycling strategy of sorts. Although at least one ship was burned in the water, some of the submarine wrecks were dragged out of the lake using a crane, and by the end of the 1990s, a private company had taken over the task of dissembling them and recycling their materials.

The smoking hull of a ship 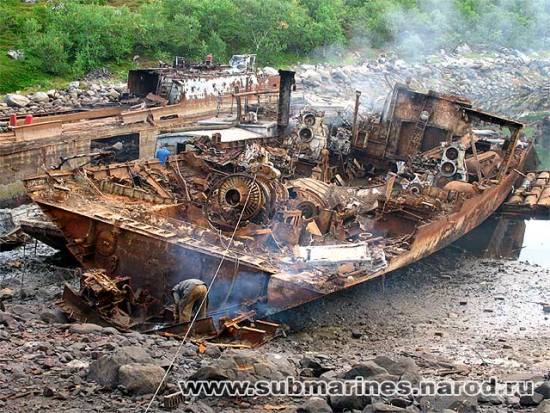 Several of the subs that were not scrapped were used as training vessels, and one even became a museum piece. However, a Google Earth image taken in 2007 showed that at least seven hulks survived, most surely beyond salvaging now. According to a Russian blog, various “K”-ships can be identified that once made up part of the Northern Fleet. 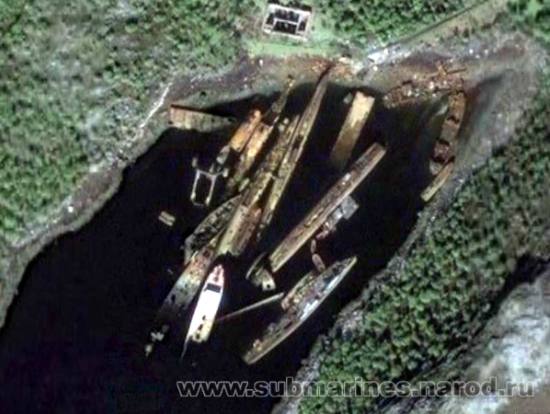 The building half-concealed in the image second from top is the ruin of an old summer house, and to its left one can just make out the remnants of an old wooden pier that once stood in the cove. A warehouse used for the storage of chemicals was also built on the shore, but was apparently abandoned in the 1980s. While some feel reminded of the demise of the Soviet Union itself when looking at the crumbling submarine skeletons, the more material fact is that the underwater craft could have been a case for recycling back in the 1970s when they were first left to their fate. 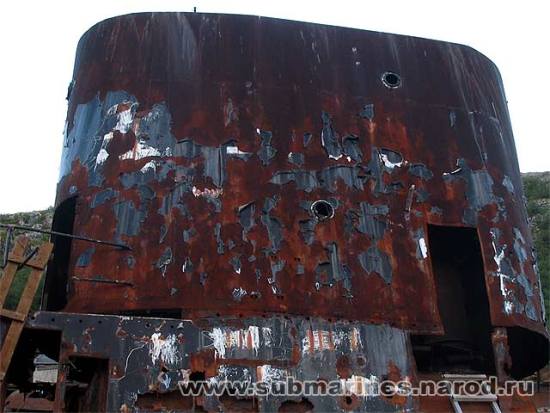 The average U.S. submarine is said to tip the scales at around 7,000 tons, though some can weigh much more. Considering the metals they are made of, submarines can provide a valuable source of flexible steel and titanium. Add other useful metals to the list, and you have a whole repository of useful materials ripe for salvaging once a submarine’s life has run its course. However, scrapping any watercraft is not cheap, as it is both time- and labor-intensive. For example, to break down a 10,000-ton ship, it would take 150-200 workers about three months. Nevertheless, these same workers could salvage almost every part, as about 80% of a ship’s steel is reusable in construction.

The remains of a sub, almost like a whale skeleton 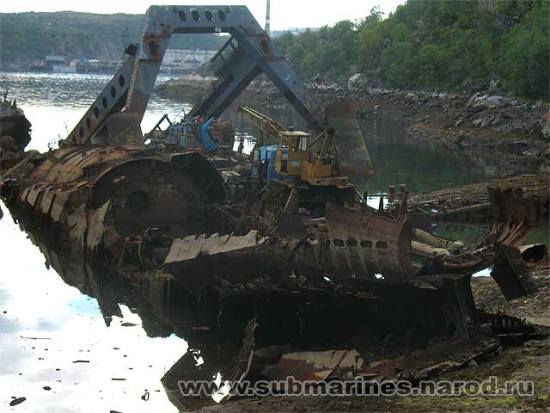 Repurposing from military to civilian usage might also have been an option for the submarines of Nezametnaya Cove, as subs are needed in the marine sciences for salvage, exploration and maintenance operations, as well as undersea archaeology. However, at least the Russian submarines pictured here did reach their graveyard. Small mercy, but not all ships are so lucky. Because ship breaking is costly, many old vessels are abandoned at sea and left to their own devices at the instructions of unscrupulous owners who want to duck the bill. Sadly, this happens more often than one might think, though official figures are hard to come by. Let’s just say spotting a “ghost ship” in our oceans may not be as difficult as it should be. 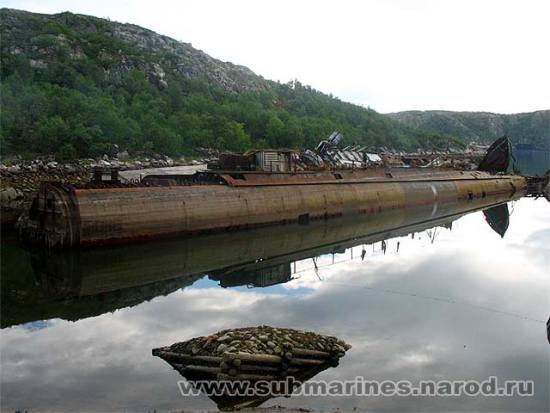 The port authorities of Mumbai, for example, had to deal with not one, but three such cases within the space of a month in 2011; ships that were on their way to the famous Alang ship-breaking yard in Gujarat or had simply been abandoned, drifting around off the Indian coastline. The vessels posed a serious threat to the city environment and population, as one nearly crashed into a recently constructed bridge, several leaked oil after running aground, and two became a real nuisance for lifeguards, who saved dozens of curious beach goers from drowning after they swam too close to the ship in rough monsoon waters. 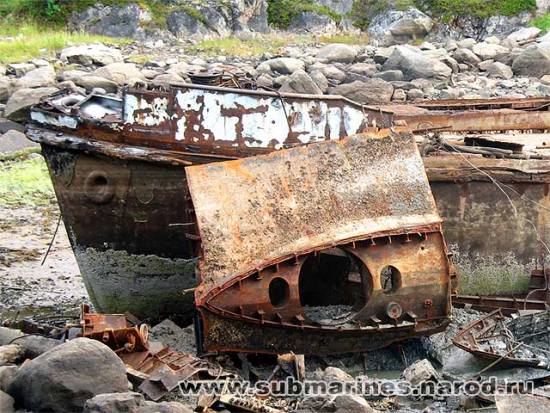 As dreary as the images of the Soviet submarine graveyard in Russia’s Olenya Bay might seem, they are also strangely fascinating. After all, when do you get the chance to look at the cross-section of a submarine? Like stranded whales, they remind us that they will not simply disappear quickly over time. Unless we change our attitude toward discarded items — even objects as big as submarines — junk will remain junk and not become the resource it could be. Sources: 1, 2, 3, 4, 5, 6, 7, 8, 9