“Nice fly you got there,” is an unusual way to start a conversation, but if you’re wearing a ring with a fly trapped inside it, you’re bound to attract some attention. 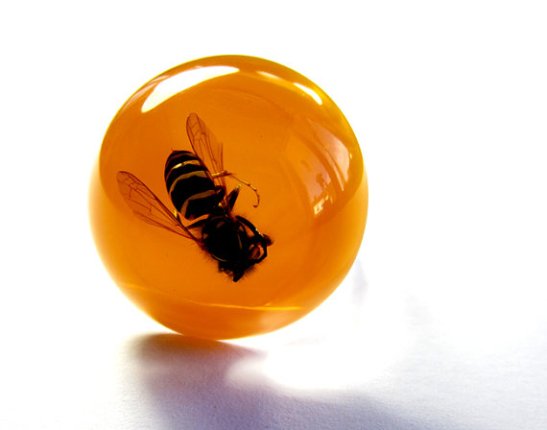 All images courtesy of Renathe Schneider and used with permission.

One person’s nuisance can be another person’s art. Just ask Swedish artist Renathe Schneider, who casts dead insects, like flies and cockroaches, in polyester resin and makes wonderful jewelry pieces out of them. And no, she wouldn’t dream of hurting a fly! All the insects she uses died of natural causes. So, there is recycling of sorts going on here; nothing goes to waste — whether it’s a mosquito trapped in a blood red casing, or a wasp in an eternal slumber, never to sting again. It’s like staring at prehistoric pieces of amber with trapped insects perfectly preserved inside, except these little critters crawled the earth much, much more recently! 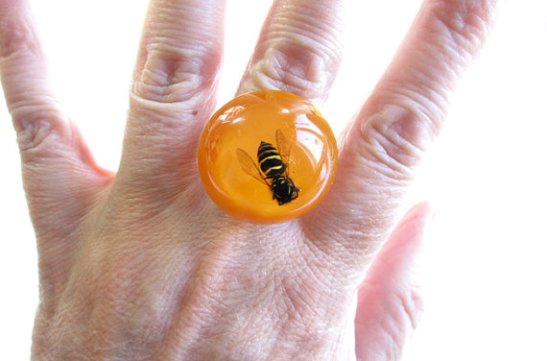 Much like those specimens used in biology labs, each insect is encased in clear resin after it has been dried out for a while. Schneider had this to say about the challenges this poses: “It can be tricky to get them in the right positions in the casting molds, and air bubbles in the resin are another problem, but I have years of practice now, and I’m very picky.” 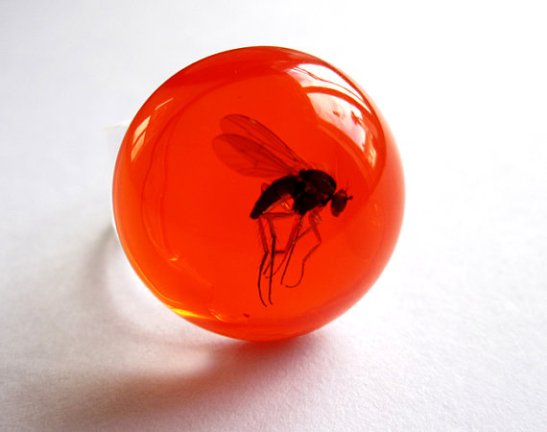 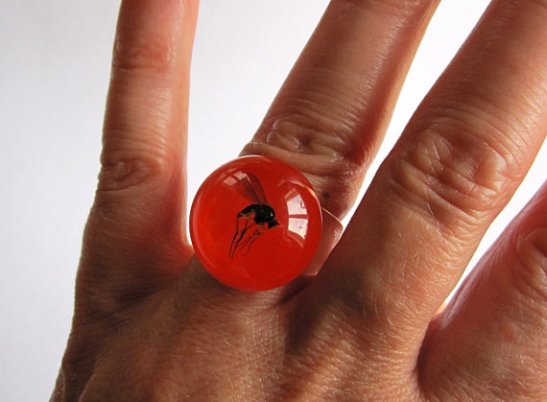 She casts the insects in different layers in the casting mold – first a clear layer, then the layer with the insect and the color pigments in the last resin layer, thus achieving her rainbow color schemes. But that’s not all… 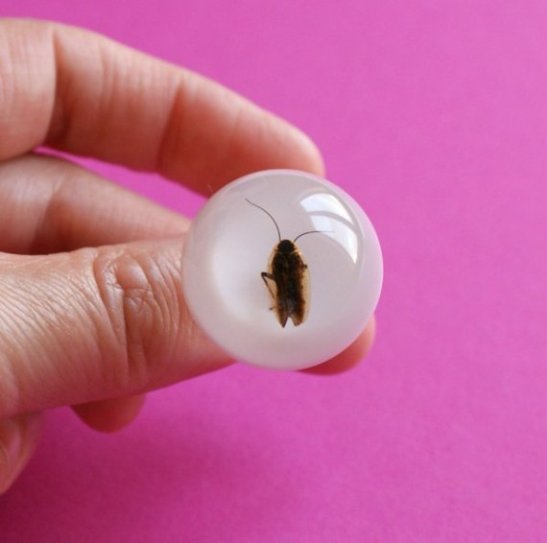 There’s still the fine-tuning. Schneider explains the process in more detail: “After the plastic hardens there is still a lot of work left to do. The plastic bits must first be sanded, then polished several times to give them the almost glass appearance.” 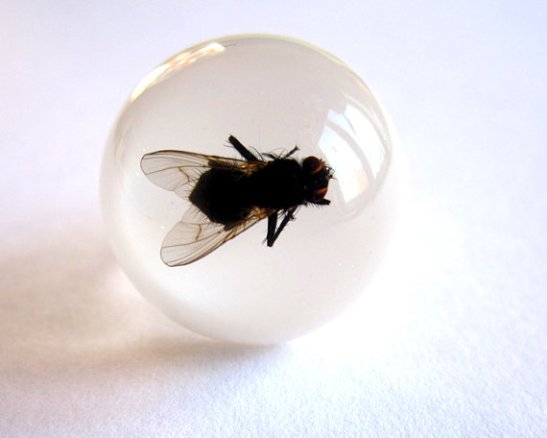 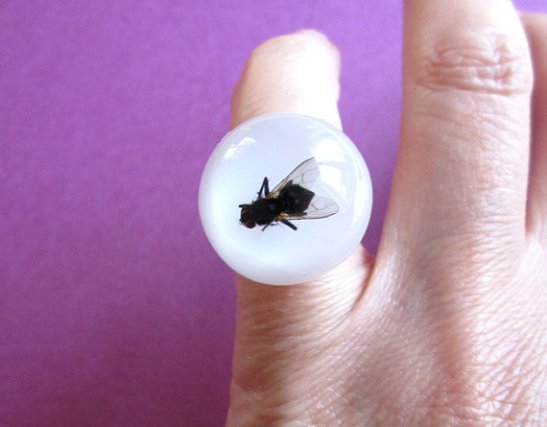 All the ring parts are handmade according to Schneider’s designs; a friend with a laser saw helps with the cutting. Schneider continues, “The actual ring pieces are cut out of sheets of acrylic commonly known as ‘Plexiglas.’ Then all of these must be sanded, polished, warmed up and then bent to different sizes forming the actual piece that goes over the finger.” 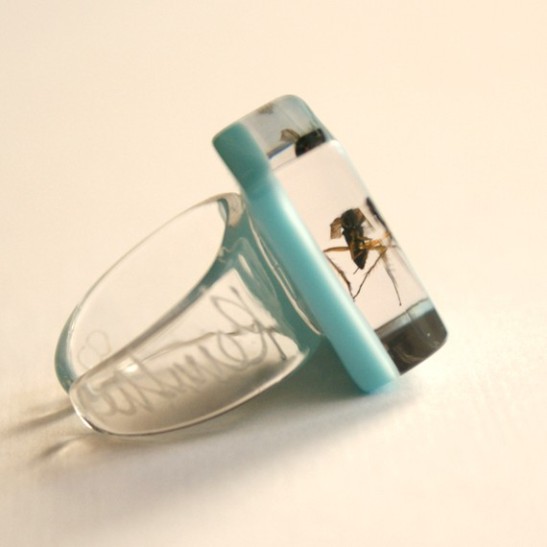 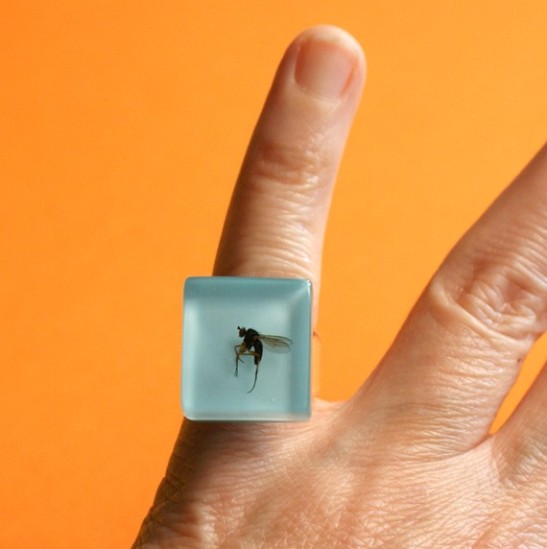 A fairly complicated process then! Part of the fascination of Schneider’s rings, especially when viewed as a series, is the fact that the insects are kept in their natural poses — that is, the positions they were in when they died. So, unlike biology specimens, they don’t seem stiff and artificial, but still very lifelike. Some even seem to be doing some calisthenics, like the hairy fly, below! 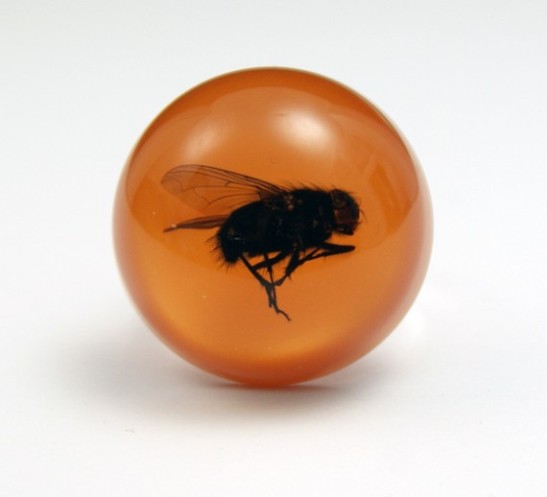 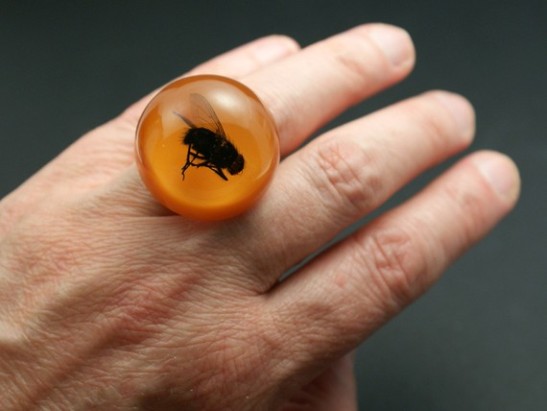 So, where does Schneider find her specimens? At home, in her studio or at her parents’ summer house is the answer; often around the insect graveyards that are windowpanes and windowsills. Ever since she started this aspect of her jewelry business, Schneider can’t pass by a dead insect without taking a closer look. If she likes the specimen, she takes it home for later — in the same way others might collect shells or pretty stones. She even has her friends into it — accomplices who are always on the lookout to help out with her “casting” requirements. 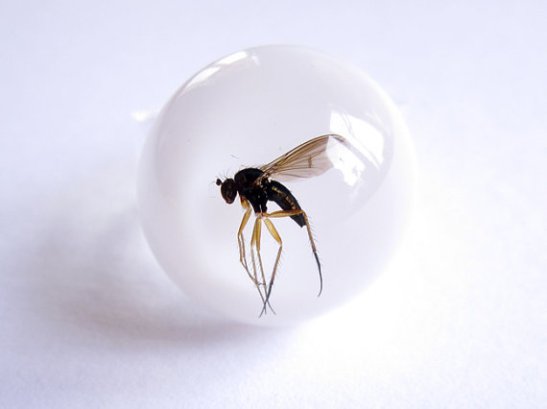 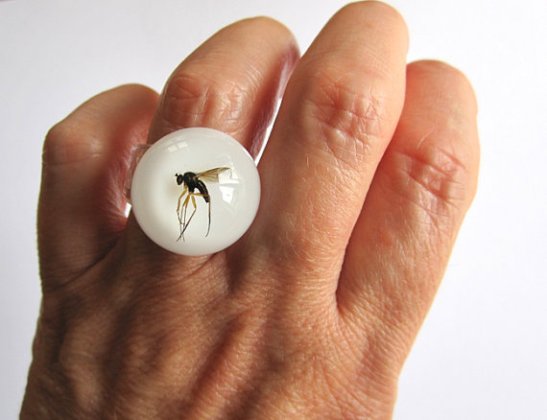 We wondered how it all started. Well, Schneider had been making clay jewelry for about 10 years, when one fine day in 1990 she got her hands on a book that would change her life. She remembers: “It was a hobby book from the ’70s that explained the many possibilities of casting jewelry with polyester resin. I was completely overwhelmed with the pictures of the brightly colored rings made of plastic.” 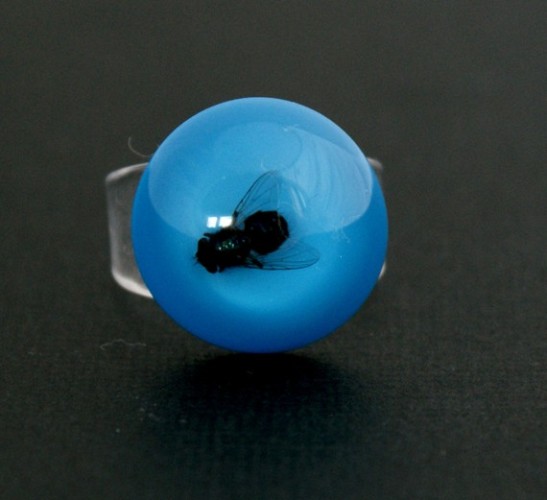 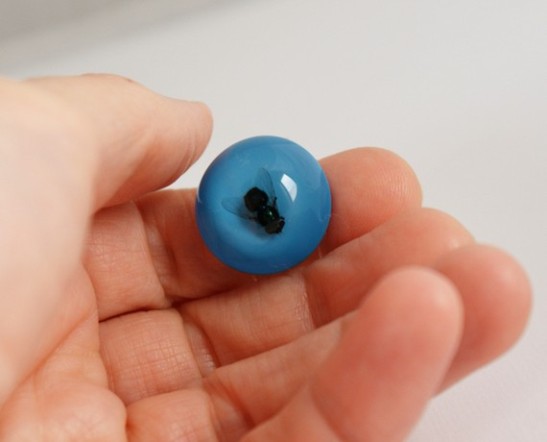 The insect rings actually started with plastic versions of the insects being used. Schneider recalls, “I had some plastic flies from a novelty store that were laying around. I cast those in resin, made rings and people thought those were funny, so they sold quickly.” But why use plastic when you can have the real thing? Schneider soon switched. “A few weeks later, I was visiting my parents’ summer house, and when I saw all those dead flies lying around in the windows, I got the idea.” We’re glad she did, as the rings look fabulous, even as they put our insect friends in the limelight, postmortem. Waste not, want not and all that. 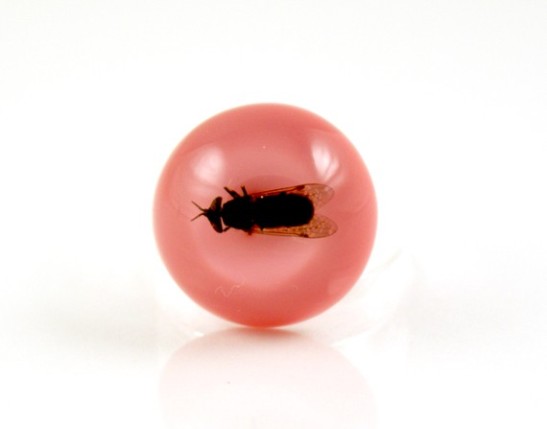 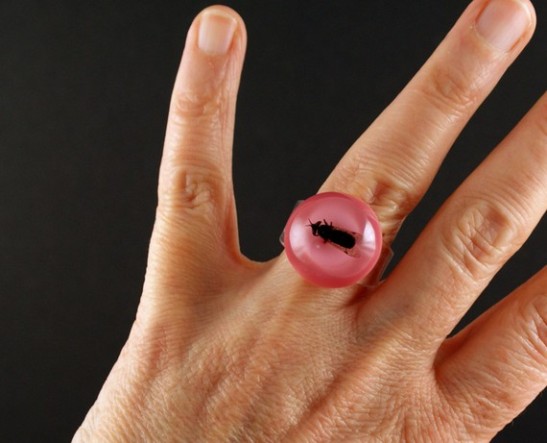 After that fateful day, Schneider’s designs and casting techniques went through many changes, until she was happy with her technique and style. All the designs are hand painted, and apart from insects, she also uses seashells as decoration. She gets her inspiration from traditional geometric designs and from folk art from around the world. Schneider lives in the small city of Örebro in southern Sweden. She has been making and selling her insects encased in resin jewelry for well over a decade, and has recently started a new line of upcycled jewelry, which you can see on her website.