Recycling stories involving objects as big as ships are rare, but here’s one retired and sunken ship, the Vandenberg, that not only fulfills one new purpose, but two. 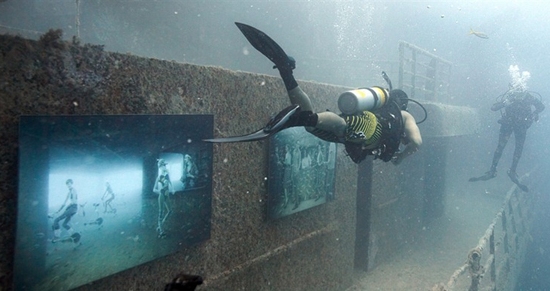 All images courtesy of Andreas Franke and used with permission.

Quiet pervades the old shipwreck. Only the steady bubbling sound of diving gear can be heard, and the occasional swoosh of flippers. The group of divers drift through this serene, slowly decaying sub-aquatic environment — encrusted with barnacles and all manner of shellfish — then come to a sudden halt. 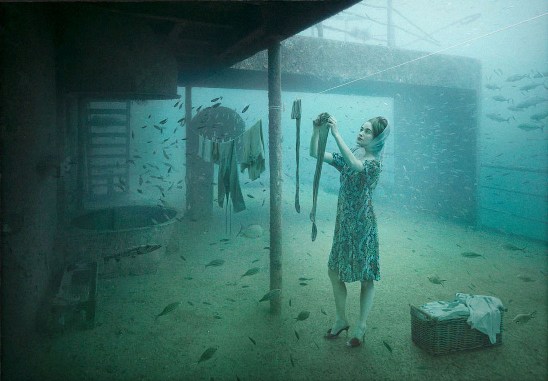 There’s a lady hanging her washing in the middle of the ship! And three boys trying their luck with an old gum ball machine. Are the divers hallucinating due to a lack of oxygen? No, they’ve just come across a unique underwater art gallery, one situated about 7 miles off Key West, FL. 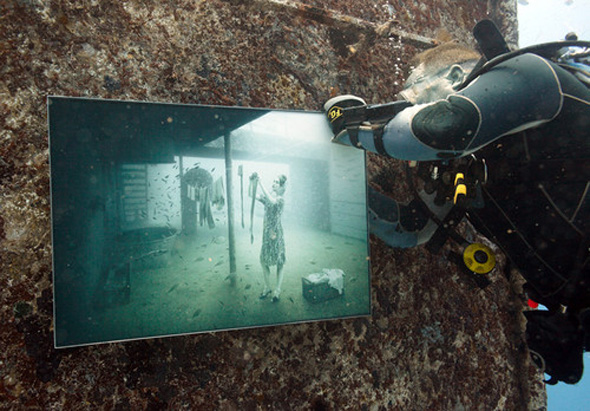 Austrian advertising photographer and artist Andreas Franke could be more than content with the success of his commercial work — his client list reads like a who’s who of global brands — but it seems his personal projects are much more sensational. The art gallery you see here is his brainchild. That’s right, in a project called “The Vandenberg: Life Below The Surface,” a shipwreck has been transformed into an art space beneath the waves. 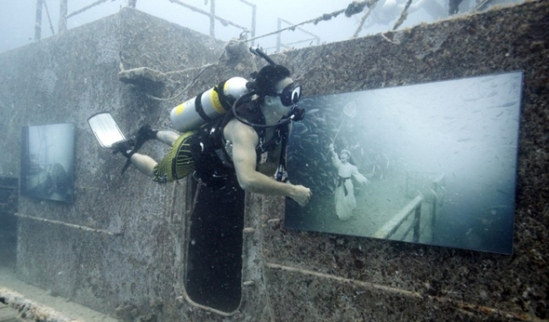 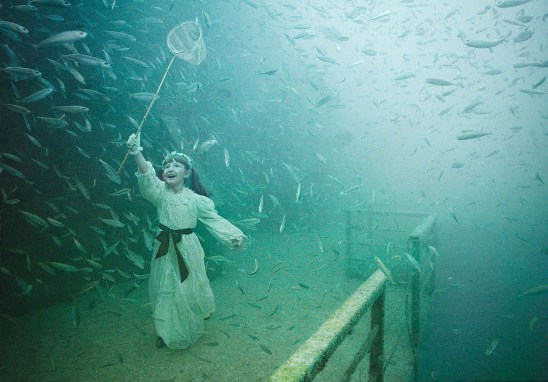 It all started in 1944, when the USS General Harry Taylor was acquired by the U.S. Navy as a troop transport ship for use in World War II. She dutifully plied the waters until 1961, when she was transferred to the U.S. Air Force, converted to a missile range instrumentation ship and renamed the USAFS General Hoyt S. Vandenberg, or the Vandenberg for short. 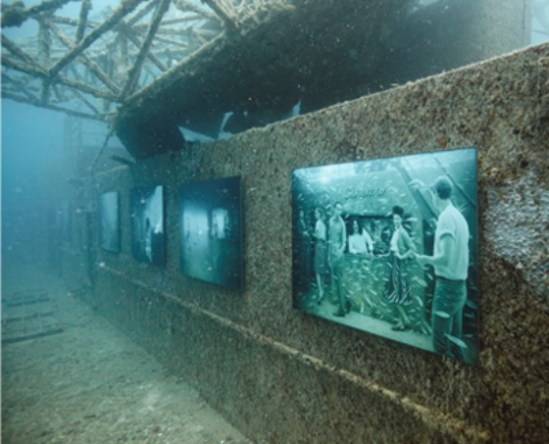 The ship was retired from this duty in 1983; 40 years in service is a long lifespan for a vessel. Though this usually means death at a ship-breaking yard for most vessels, fate had a new lease of life — and a second and very different career path — in store for the Vandenberg. 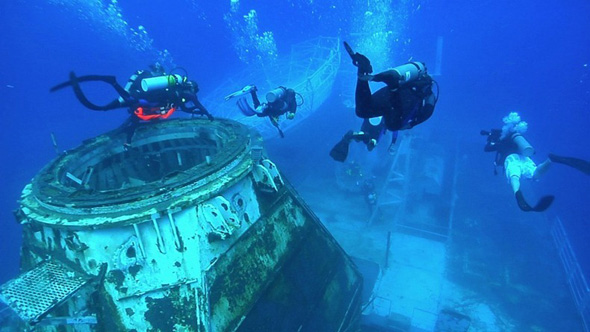 In 1998, after 15 years of lying around, the Vandenberg was discovered and used as a location for the science-fiction movie Virus, in which she played the role of Russian vessel Akademik Vladislav Volkov. Even today, some of the Cyrillic lettering applied for the filming is still visible on her hull. 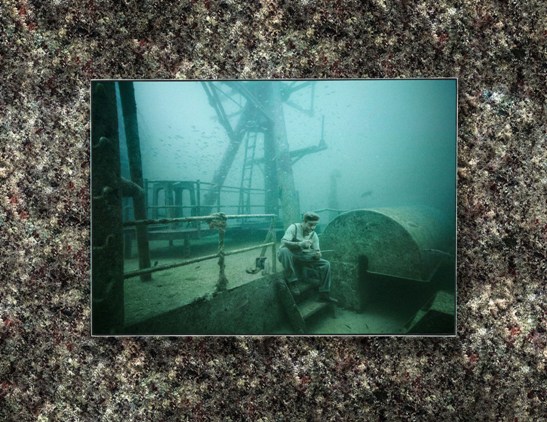 After this brief but glamorous moment in the limelight, the Vandenberg had to wait again for her next post-retirement job — for 10 years, it turned out. The ship was auctioned off, ready to be transferred to Key West by her new owner, this time with a more permanent purpose in mind: she was to be sunk and converted into an artificial reef in the Florida Keys National Marine Sanctuary. It was a time-consuming process, as paperwork had to be processed, funds raised and the vessel cleaned up and prepared. 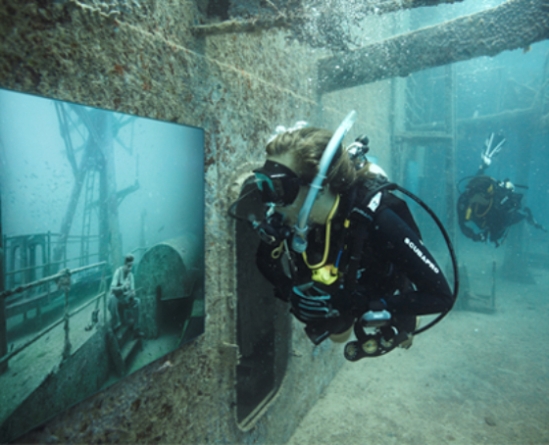 The sinking finally happened on May 27, 2009, and since then the 522-foot-long ship has become the world’s second largest artificial reef, providing shelter and habitat for marine life and serving as an underwater classroom for marine scientists who are able to gather valuable material because of the ship’s placement on the ocean floor. 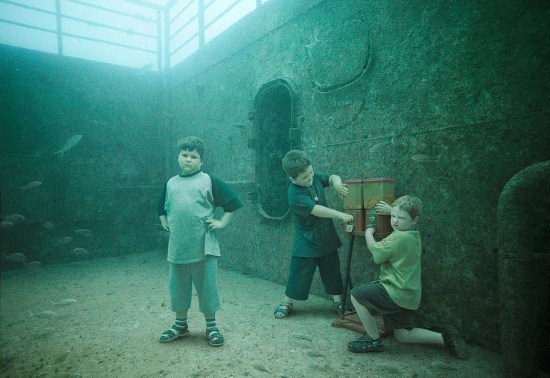 However, given her talent for performance, this wasn’t enough of a (re)purpose in life for the Vandenberg. During his first diving trip to visit the wreck in 2010, it took Franke only one look to realize the Vandenberg had hidden potential. After several dives, during which he took numerous pictures of the old sunken ship, Franke had a bright idea about how to make the Vandenberg a star again — and instill her with life once more. 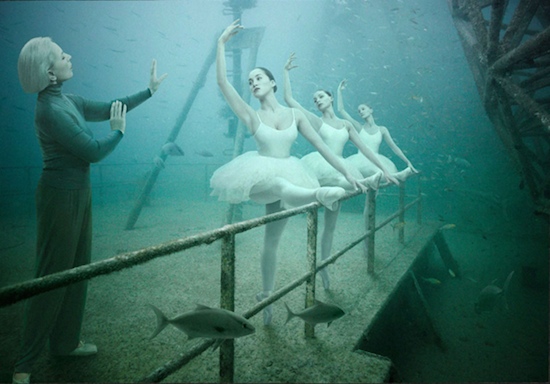 Franke explains: “Even though there is so much life — marine life — all over and around it, the shipwreck itself, to me, is a dead thing. But I thought that if I put people on it, then there would again be life on that ship.” 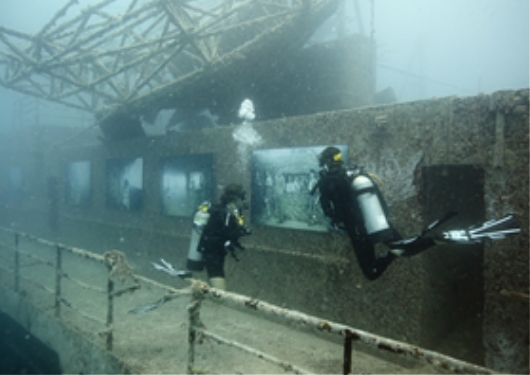 And that’s what he did — populating the boat with people, though not actually but digitally. Franke added figures and scenery to the photographs he took, making them almost reminiscent of life on a cruise ship — and thus bringing viewers back to scenes that never were, in light of the Vandenberg’s military background. Franke comments on them as, “… mystified scenes of the past that play in a fictional space. Dreamworlds, where you can get lost or you can identify with. This makes a new and unexpected atmosphere.” 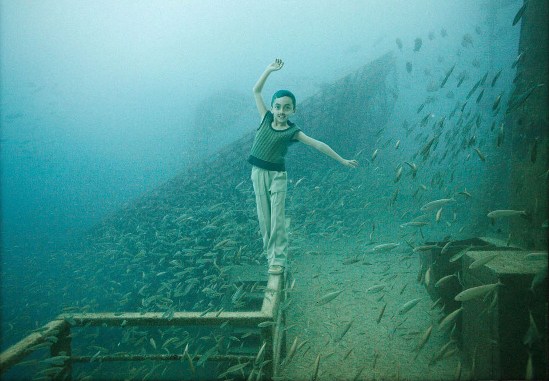 Indeed, Franke’s shots have an eerie, yet eventful life underwater. His 12 best photographic manipulations make up the waterproof gallery, at a depth of 93 feet along the Vandenberg’s starboard deck. Since August 4, 2011, any certified diver can visit. Dependent on the response, the aim was for the gallery to be open for a few weeks. 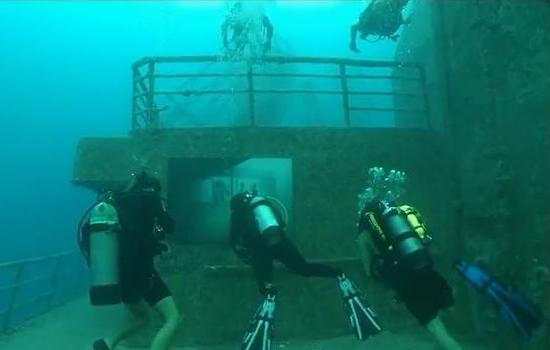 If you’re wondering how it is technically possible to exhibit photographs beneath the waves without them being damaged by seawater, be assured that Franke and his team have thought of everything. 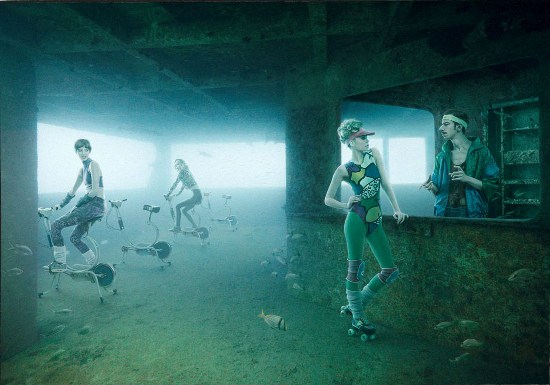 Each photograph is pressed between two sheets of Plexiglas and enclosed by a stainless steel frame that has been sealed with silicone to keep out the water. Needless to say, no environmentally harmful materials were used. The frames are attached to the ship’s walls with strong magnets, making it easy to remove them at the end of the exhibition. We just love the double recycling aspect of the ship as a haven for fish and other marine life that also provides the divers with the enjoyment of seeing some art. 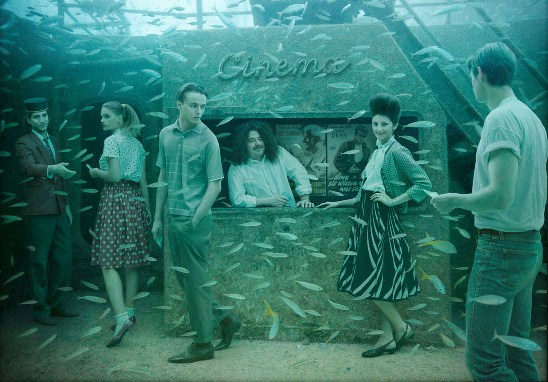 Franke has been a successful advertising photographer for more than 20 years and has won numerous awards. Several times he has been listed in Luerzer’s Archive among the “200 Best Ad Photographers Worldwide.” His client list is impressive, and includes customers like Ben & Jerry’s, Coca-Cola, Ford, Heineken, Visa and Nike. For more about the Vandenberg’s art gallery, make sure to visit the official “The Vandenberg: Life Below The Surface” website. Though nothing could top visiting the Vandenberg, here is a video that shows something of what the experience is like. Sources: 1, 2, 3