Modern Day Tower of Babel Made of 30,000 Upcycled Books

This upcycled installation proves that we can take reuse to soaring heights.

For the biblical residents of the famed Mesopotamian region of Babylon, chitchatting with each other was a piece of cake since they were entirely united in their culture and goals. Perhaps their biggest mistake was attempting to make a soaring structure (referred to as the Tower of Babel) that would reach heaven because it would seem that someone perceived that grand effort as being a bit presumptuous and, dare say, even a smidge cocky. That someone was God, and when he got wind of what they were doing, he probably uttered something to the effect of, “Nope. Not gonna happen.” Before the overachieving Babylonians with grand, heavenly aspirations knew what hit them, they were suddenly scattered around the globe and rendered incapable of communicating with each other using their once shared language. Fast-forward to the year 2011, and we have instant access to the woefully inaccurate Google Translate as well as infinite smartphone apps and various other paper-based translation guides whenever we encounter people that speak a tongue different than our own, but it’s just not the same as a universal translation feature. Of course, if you really want to communicate effectively with someone from a different culture, all you really have to do is rub elbows while sharing a public art experience. 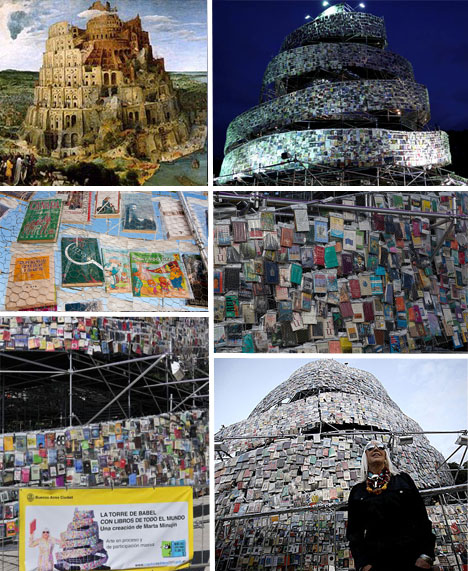 One outdoor installation that perfectly encapsulates this entire cultural communication vibe is Marta Minujín’s seven-story, 82-foot-high Tower of Babel of Books. Imagine what the Mesopotamian structure might have looked like as it climbed into the clouds and Minujín’s version comes darned near close, except that instead of using bricks, she opted for upcycled books instead. Not just any texts, however. The artist purposefully selected more than 30,000 global works generously donated by the embassies, libraries and residents of 50 countries in order to commemorate Buenos Aires, Argentina’s newly earned status as the 2011 World Book Capital. To further flesh out the notion of literacy celebration, the National University Art Institute alum set her bibliophile spectacle against a backdrop of auditory stimulation using an original musical soundtrack that features the multilingual repetition of the word “book.” Minujín’s Tower of Babel of Books echoes her 1983 full-scale replica of Greece’s iconic Parthenon, appropriately titled “The Parthenon of Books” due to the utilization of 30,000 once-banned texts within its framework. Erected upon the restoration of democracy to her native country, Minujín is certainly no stranger to conceptualizing and manifesting thought-provoking, eye-opening public works full of substance. As with her version of the Parthenon, Minujín’s latest artistic creation reached the end of its road in May 2011, but not before its materials were recycled once again. Instead of the literary works studding the exterior of her literal and figurative artwork meeting a landfill demise, the public was invited to select a single text of their choice, with any remaining books earmarked for an archive called The Library of Babel. Now that’s a happy ending.