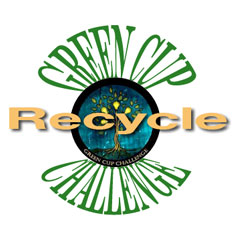 Pioneer Academy (PS 307Q), a Pre-K – 4th grade school in Queens, NY, is the winner of the 2012 Green Cup Recycle Challenge, a national student-driven recycling competition for K-12 schools sponsored by the non-profit Green Schools Alliance (GSA). Pioneer achieved “Recycling Champion” status by earning the highest score of any school — 106 points — and correctly sorting 96% of its recycling and trash bins. The school earned 10 “Bonus Points” for additional waste reduction efforts including paperless communications, purchasing recycled paper products and reusable water bottles, and participating in “Trayless Tuesdays.” During the four-week Challenge, which ended April 30, schools competed for points by “recycling right” — improving recycling compliance rates and decreasing contamination. Weekly bin checks provided instant feedback on how well schools were recycling. “We checked 20 bins each week,” says Jasmin Andujar, Pioneer Academy’s science teacher and sustainability coordinator who managed the Challenge with help from her 3rd grade Green Team. Andujar credits the children for their hard work, and a documentary about plastic pollution as the reason for her increased commitment to greening. After seeing Bag It at a professional development seminar last summer, Andujar became determined to improve less than stellar recycling practices at her school. “That movie made me realize I could do my part to teach children about protecting the Earth,” she says. So, in October 2011, she started Pioneer’s Green Team, instilling practices that prepared everyone for the Recycle Challenge, and which still continue today. Aside from ensuring that each classroom had both garbage and recycling bins, and informing staff about recycling rules, Andujar trained her small army of enforcement agents. “Each week, the Green Team swept through the school and posted “Green Inspection Grades” on every classroom and office door,” says Andujar. “G” for green, “M” for making progress, and “P” for polluting. According to Andujar, a lot of teachers received “Ps” and were quite embarrassed. “Within two to three weeks, we saw improvement,” she says. Green Team members handed out recycling tips and signs. Andujar also met with custodial staff to see how she could help them. “The custodians said that students were mixing garbage with recycling; but now that we recycle, they’re recycling too,” she says. More importantly, Andujar says, winning the Recycle Challenge was a source of pride for the children, which showed them that the work they do every week pays off. Another “Recycling Champion” was the Hopkins School, for grades 7 – 12, in New Haven, CT. Hopkins received 101 points and had 91% of its bins properly sorted. The school — which had just finished the Green Cup Energy Challenge in March — earned 10 “Bonus Points” for an impressive array of “extras” that included trayless dining (to save water, napkins, and reduce food waste), use of 100% recycled paper, a battery collection drive, and an aggressive recycling program that has reduced the number of trash pickups from five to three per week. Because Hopkins already had high recycling compliance rates, the school’s Sustainability Committee (SusCom), composed of faculty and two dozen students, had to step it up a notch for the Recycle Challenge. They made announcements at school-wide assemblies, hung posters, sent mass emails and published reminders. “We had students and three faculty members checking about 30 bins each week, close to 50% of the bins in the school,” says Priscilla Kellert, History Department Chair and SusCom faculty head. Sarah Wagner, a Hopkins Junior, is one of SusCom’s most active student leaders. “The bin checks allowed us to see if students were recycling on their own,” says Wagner. “It was nice to see that they were really participating and taking recycling seriously.” Last year, Hopkins switched to single-stream recycling. Instead of having one bin for paper, one for glass, metal and plastic, everything is thrown into one bin, which, Wagner says, makes recycling much easier. “SusCom has increased the number of recycling bins on campus,” she says. There are bins in major gathering places, blue bins in every classroom, and six new outdoor recycling bins, purchased with PTA monies, that have been strategically placed around the campus, including on the athletic field. The group’s signage committee places signs above every recycling bin, explaining what can and can’t be recycled. Trash and recycling bins are always placed next to each other. “The thing about recycling is, you’re trying to address peoples’ behavior, so it has to be easy and convenient until it becomes second nature,” says Kellert. “It takes a lot of gentle reminders; you need to set a good tone and be persistent.” Wagner says that students have told her how much they appreciate SusCom’s campus greening efforts, and being a top school in the Recycle Challenge was rewarding. “Helping the environment is really important to me. It’s nice to be recognized and it makes you want to continue to do a great job,” she says. In addition to Pioneer and Hopkins, four other schools achieved the level of “Recycling Champion” by earning 90 points or more: Hewitt School in New York (96 points); Maret School in Washington, DC (94 points); Miss Porter’s School in Farmington, CT (90 points); and Millbrook School in Millbrook, NY (90 points).