A Sanitized, Eco-Solution to the Dirty Diaper Dilemma

The typical disposable diaper-wearing child generates 1 ton of solid waste, so what can be done to help recycle all those diapers? 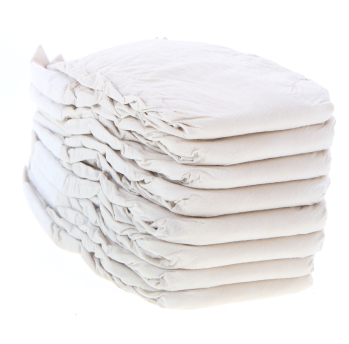 Guess how many used diapers are sent to American landfills? The answer to that question becomes far more apparent when you realize that every year, far more than 4 million newborns make their official debut. “A lot” of diapers, while an accurate response, does not quite make the jaw-dropping impact of the EPA’s findings, which state that 3.7 million tons enter our countrywide municipal waste stream (the majority of which require five full centuries to break down). In the U.S., that’s the equivalent of 3,796 one-time-use plastic-based nappies per baby bottom, or 49 million individual diapers tossed in the garbage bin every single day. What a crying shame. As for the actual material we are stuffing our precious underground waste storage facilities with, think nonbiodegradable plastic and lots and lots of trees. Disposable diapers typically consist of an absorbent, crystallized polymer and wooden pulp core sandwiched between an outer layer of leak-proof plastic resin and a fabric-like yet still 100% plastic interior lining. For a bigger-picture perspective, it’s helpful to note that in the U.S. alone, approximately 3.4 billion gallons of oil (1 cup per individual diaper) and 250,000+ trees are utilized annually to create these very essential staples of babydom. This perennial parental eco-conundrum has been partially tempered by the advent of the diaper-free elimination communication method (admittedly kind of risky), as well as sustainable, chlorine-free, diapering alternatives made with Stewardship-certified wood pulp, GM-free corn, organic cotton and/or bamboo fibers, many of which can be cost prohibitive. Then, there are biodegradable options from companies like gDiapers, Broody Chick and Elements Naturals. Do-it-yourselfers need to take special precautions when composting human waste, so as nice as bio-diapers are in theory, the time-consuming and often odiferous reality can sometimes be off-putting to even the most dedicated greenies. Door-to-door pick-up services are perhaps better suited to those with sincere planetary concern but limited free time since they utilize high-temperature, industrial composting facilities for thorough sanitation. Nevertheless, while there are plenty of choices, there doesn’t seem to be a clear front-runner. Well, perhaps that??s all about to change now that TerraCycle, credited with preventing 2 billion post-consumer items from ending up in U.S. landfills during 2011, has now taken on the diaper recycling cause. Like North America/U.K.-based Knowaste, which sanitizes various types of absorbent hygienic products prior to converting them into composite building materials, the New Jersey-headquartered recycling juggernaut is pursuing an equally revolutionary waste-streamlining endeavor. The 11-year-old eco-company, known for its very successful post-consumer packaging collection brigades, which not only benefit the planet, but also countless charitable organizations, intends to roll out countrywide dirty-diaper collection stations as early as September of this year. While previous dirty-diaper recycling pilot programs have floundered due to lackluster participation, TerraCycle is hoping that strategically located collection bins set up in high-volume areas such as nursing homes and daycare facilities will encourage people to make the eco-commitment. Upon transferring collected diapers to processing facilities, TerraCycle will treat them with very high temperatures and a multispectrum biocide to sanitize as well as remove all traces of waste. An agitator and multiscreening process will then separate wood from plastic components so that the reclaimed material can ultimately be transformed into usable products such as plastic construction “lumber,” concrete additives and absorbent pet products, among other things. Perhaps the greatest challenge to TerraCycle’s admirable plan lies in how to convince parents to not only reserve their used diapers, but also carve time out of their busy schedules to ultimately transport them to collection stations. Since there is a widely perceived ick factor involved, that may prove to be an uphill battle, but it would make a real difference given the fact that in the course of just one year, the typical disposable diaper-wearing child generates 1 ton of solid waste.