CANLOVE’s ‘Can Do!’ Attitude Toward Graffiti Can Recycling

What are spray cans made of?

Spray-paint cans and other types of metal containers are accepted by more than 5,300 municipal recycling programs, where they are typically reclaimed as scrap metal. There’s a hitch, however. If an aerosol can contains residual traces of toxic chemicals (such as pesticides), it can be deemed hazardous waste and be subject to specific waste disposal regulations. Another factor to consider: In order to prevent potential explosions (particularly when exposed to temperatures above 130º Fahrenheit) the containers have to be entirely drained of their contents prior to dropping them in a recycling bin. If the remaining product cannot be dispensed, it must be dropped off at a household hazardous waste collection center in your community.

Do spray cans harm the environment?

When discarded improperly or left behind at urban graffiti sites, cans are almost never reclaimed for scrap metal. They inevitably eventually end up in landfills, where they are prone to explosion and ground/air/water contamination.

The California-based nonprofit organization, created by Paul Ramirez and graffiti artist DJ Neff, is devoted to plucking spray cans from post-graffiti sites such as bridges, tunnels and ditches so that their “latent potential” as recycled art can be unlocked. In effect, Ramirez and Neff, along with a collective of artists, fashion new creative works using the empty aerosol paint cans that they find and process. As the nonprofit’s motto states: “No can left behind.” 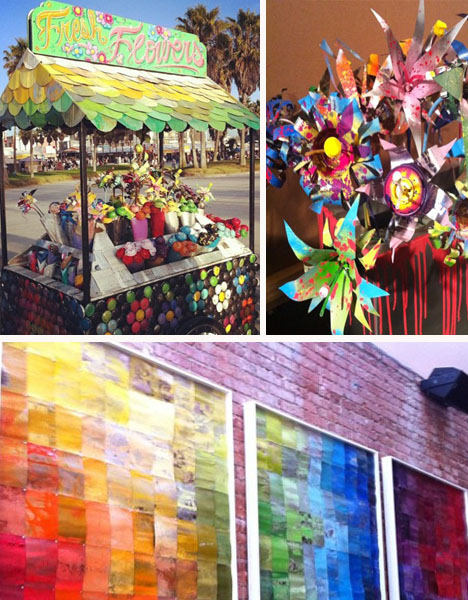 Where does CANLOVE find its raw material?

While CANLOVE accepts recycled spray-paint can donations from the public, volunteers also comb top graffiti sites in California and New York to obtain a regular source of used paint cans. Venice Beach, CA’s infamous Venice Art Walls have also proven to be an excellent source of spent aerosol paint cans. Graffiti arts advocacy group In Creative Unity has facilitated a regular can collection schedule at that site, something that CANLOVE would ideally like to duplicate in various global graffiti “hot spots.”

How does CANLOVE prep discarded spray-paint cans prior to repurposing them as art?

Outfitted in protective gear, team members first carefully puncture each can to release the pressurized propellant in order to prevent explosions. They then drain residual paint for their “bleeds” series of canvas artworks (utilizing the contents of several hundred cans for each) and the totally empty container is ready the next day for dissection. In addition to using the entire metal perimeter of each can, the nonprofit also makes the most of the domed top, circular bottom and even the interior marbles that help to disperse the paint within the container.

What kind of art does CANLOVE create?

What are CANLOVE’s future goals?

Founders Ramirez and Neff have adopted a realistic perception of the graffiti scene, acknowledging that it can be challenging to fundamentally change the attitude of artists who habitually “spray and drop” rather than “spray and recycle” their empty cans. While they are encouraged by the cooperative recycling attitude of many graffiti artists who quite like the idea of their empties morphing into future artworks, they feel that there is certainly room for improvement. It would be ideal to set up recycling bins all around the world to collect used aerosol cans, but CANLOVE recognizes that such a comprehensive goal would require a great deal of planning, coordination and sufficient funds to make it all come together. As such, they are open to assistance of all types. In the meantime, they are eager to establish a community service program that will enable arrested graffiti artists to become better informed about the consequences of their actions while also giving back to society at large. Among the major benefits, graffiti artists can spread the “recycling word” to their fellow urban muralists while spending a set amount of time “in the trenches,” actually processing empty paint cans with their own two hands. Ramirez and Neff hope that both activities will instill a greater appreciation for the art form as well as the planet.