Throughout the past several years, the light artist collective known as Luzinterruptus has established a unique brand of eco-awareness in the form of colorful, clandestine, weekly public art displays that dazzle, delight and get people talking. Hailing from Spain, the anonymous trio makes a point of setting up their visual spectacles under the cloak of the nighttime sky, utilizing materials that can be easily recycled. Their hope is that through their art, bystanders will be subtly inspired to alter their personal behavior in a way that is easier on the environment. Whether luminescent, reclaimed glass bottles spill out of inoperable public water fountains (simulating the H2O that Madrid’s residents should ideally have free access to), protective greenhouse domes give props to tenacious urban greenery sprouting forth amid the concrete jungle or 1,000 inflated, illuminated recycling collection bags offer glowing proof of the ease with which reusable materials can be collected, Luzinterruptus continues employing imaginative and impactful eco-education strategies that stand the test of time long after the physical evidence of their efforts is placed back in the recycling bin.

When curbside collection services are not an option, municipalities often give citizens around the globe access to public recycling collection bins; in many cases, they even augment the door-to-door programs that are already in place. If you are innately inspired to do right by the planet, then depositing your metal, glass, plastic and paper items into these eco-containers is second nature, but there are some who unfortunately still perceive it as a chore. That is where a quirky design revamp can make a world of difference. From robot-like receptacles capable of accommodating a jolt of urban greenery, to open-mouthed dolphins, artsy, color-fused stalls and eye-catching, hand-painted versions, a task that is otherwise deemed ho-hum can become slightly more enjoyable when it’s wrapped up in fun. Automobile maker Volkswagen explored this concept with its sound effect-enhanced public collection containers, and found that people were so positively engaged that they momentarily forgot that they were positively altering their personal habits in the process. 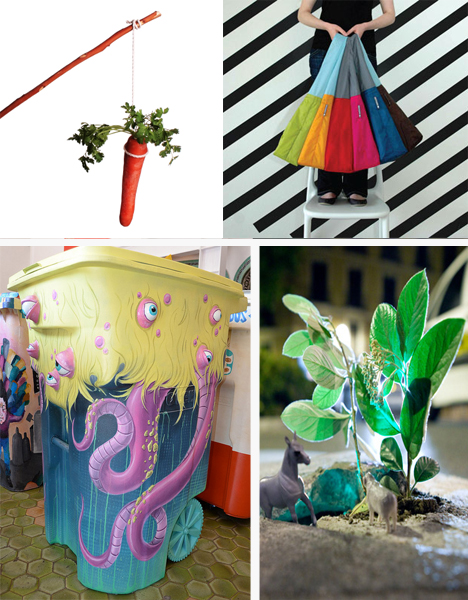 In the best of all possible worlds, everyone would chip in on the green front to ensure a healthier, happier planet, but that’s sadly a somewhat naïve notion. In reality, it seems as though it is deeply engrained within the modern human psyche to ask, “What’s in it for me?” Rather than fight it, there are an increasing number of companies and governmental programs (think CitéGreen, Recyclebank, TerraCycle, Mercado de Trueque and Givmo) that revolve solely around this prevailing question by offering tangible incentives that trigger positive behavior. Various for-profit businesses are also recognizing the three-pronged personal, professional and planetary benefit of encouraging their patrons to recycle packaging in exchange for small discounts and occasional freebies (Tarte Cosmetics, for example), especially since it can instill a deeper sense of brand commitment and overall enthusiasm among their client base.

If you practice what you preach, sooner or later, a friend, colleague or community member is going to take note of your green behavior and either take a moment to ask you about it or simply just emulate it. That means being a consistent proponent of reusable items, including shopping bags, water bottles, to-go containers, travel mugs or washable napkins. Use any one (or all) of those basic eco-staples while out in public and the habit will start catching on among those who take mental notes, thinking quietly to themselves, “Hmm, good idea. I’m going to start doing that!”

Ask local businesses to jump onboard

Being squeaky green at home may feel good, but upon entering the “real world,” all of your personal efforts may seem moot when you witness the kind of large-scale waste that typically occurs. So, instead of quietly lamenting it, start speaking up. Begin voicing your opinion by informing the proprietors of your favorite local businesses that you would appreciate them taking a sustainable stand on behalf of the greater good of the planet. Ask mom-and-pop shops to set up recycling bins. Talk to local farmers market vendors about offering a discount to those who bring their own reusable containers. Request that fast food joints eliminate all one-time-use plastic items, instead replacing them with 100% biodegradable versions. Change won’t occur on a larger scale until the core businesses in your neck of the woods know that you are eager to rally around their sustainability efforts.