Artist Patty Grazini creates recycled figures inspired by the crime pages of ‘The New York Times’ from ages ago.

Those crumpled-up paper scraps rising out of your wastebasket — you know that they’re recyclable, right? The volume may seem minuscule compared to whole newspapers that are easy to drop in a collection bin, but every little bit does matter. It is encouraging to note that 62.5% of the paper and paperboard-based materials discarded every year in the U.S. are recovered, but you have to wonder why we are throwing out such easily recyclable items in the first place (29% of the 250 million tons of total municipal solid waste in our country is from tree pulp-derived sources!). It is hard to blame our collective laziness on the notion of paper recycling “difficulty” because, in addition to curbside collection programs from coast to coast, those with a computer have 24/7 access to countless creative repurposing ideas. Enter paper artists. Whether they are motivated by the deep desire to do right by the planet or they simply enjoy having access to a plethora of free materials, the many products of their collectively fertile imaginations always succeed in enamoring the public at large, prompting us to say, “Wow, can you believe they made that out of trash?” Patty Grazini’s paper artistry has recently become the subject of many enthusiastic Internet posts, not so much for its eco-benefits, but more so because of the clever way in which she frames her ever-changing thematic creations. Using historical ephemera such as book pages, newspaper snippets, and 17th century handwritten letters from France among other 100% paper-based media, the self-taught, Seattle-based artist has transitioned from making elaborately decorative shoes to intricately detailed 12- to 14-inch handcrafted sculptures depicting a colorful (and often shady) menagerie of characters, all of whom achieved their 15 minutes of fame courtesy of the pages of The New York Times. 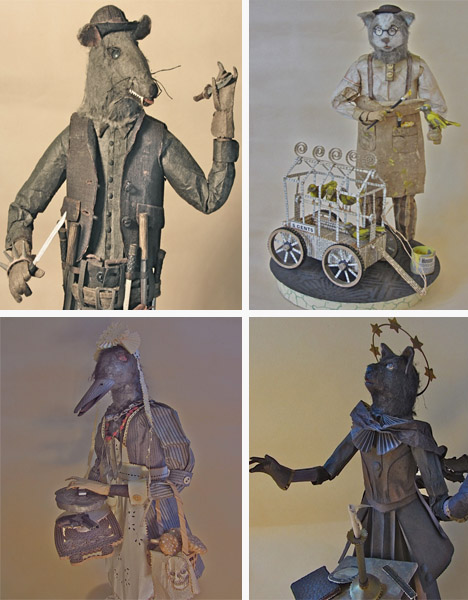 Immortalizing criminals — petty or otherwise — isn’t typical artistic fodder, and while it might get a passing glance from the public at large, the best artists know that eliciting a deeper emotional connection to their work is key. Grazini achieves this by imbuing her paper figurines with animal-like traits reflective of the earthly crimes that their human namesakes were accused of committing. To shed further light on the subtext of her artistic efforts, Grazini sells each one of her paper characters along with a copy of the original Times article detailing the offense that was committed. Below are a few standouts in Grazini’s cast of criminally motivated characters. August W. Eckhardt — portrayed as a slightly slimy, bowler hat-sporting sewer rat Turn-of-the-century expert knife wielder, August W. Eckhardt, who already had several aliases under his belt, made a huge New York City pub argument all the more memorable by launching a knife directly into the heart of Mary Ann Gaston. The publicly witnessed spectacle and consequent death of his target prompted Eckhardt to flee from the scene of his crime, but investigators were later able to locate and ultimately charge him with the murder. John Herbert — portrayed as a seemingly trustworthy yet ultimately slick cat Posing as a Civil War veteran, John Herbert, along with Julius Scherer and Charles Herman, were arrested for misleading the public by selling hand-dyed sparrows masquerading as bright yellow canaries without a license. The 80-year-old Herbert was in charge of driving their bird-toting wagon throughout the streets of New Jersey, and was ultimately released without penalty while his two companions were fined a total of $10 for their transgressions. Emma Monard — portrayed as a cranky charcoal-tinted crow Ill-tempered and purportedly irrational 25-year-old Emma Monard was informed by her employer, Francis Ducasse, that he didn’t care for her cooking, and upon striking another staff member following an argument, he ultimately fired her. The Swiss-born woman then retaliated by verbally threatening Ducasse while holding a revolver to his head, but after a struggle, the gun fell from her hands. She was later taken to an asylum for mental evaluation. Olive Brown — portrayed as a black cat with a star-encrusted halo Jesus-talking spiritualist Olive Brown, along with her husband and partner in crime Philander Brown, managed to bilk close to $3,000 from an elderly gentleman named Paul Hill in 1890 after claiming that she would bankroll a heaven-based lumber yard and provide his deceased (and naturally heaven-dwelling) wife with new clothing.