Aluminum cans have the distinction of being the most recycled and most recyclable beverage container in the world. According to the Can Manufacturers Institute (CMI), 105,784 cans are recycled every minute nationwide. 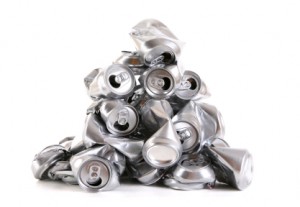 Aluminum cans can be used then recycled and returned to a store shelf (as a new can) in as little as 60 days. That means you could conceivably buy the same recycled aluminum can from a store’s shelf nearly every nine weeks, or six times a year. The Aluminum Association, CMI and the Institute of Scrap Recycling Industries (ISRI) announced in June 2011 that the U.S. rate for aluminum cans reached 58.1% of all cans recycled — the highest level in 11 years. Close to 56 billion aluminum cans were recycled in 2010, which meant a significant savings in energy, because it takes 95% less energy to produce a can from recycled material. The Aluminum Association’s goal is to recycle 75% of aluminum cans by 2015. This is a very doable objective because the aluminum beverage can is, by far, the most valuable package in the recycling stream and is the only packaging material that covers the cost of its own collection and reprocessing, according to The Aluminum Association. A quote from Robin Wiener, President of the Institute of Scrap Recycling Industries, illustrates the valuable recyclability of aluminum cans: “Aluminum cans represent a valuable portion of these recyclable commodities. Recycling is much, much bigger than the bin at the curb. Our industry provided a $77 billion boost to the U.S. economy in 2010, protected our environment and helped save energy and natural resources.” Since 1972, Americans have recycled 37 billion pounds, or 1,099 trillion aluminum cans. So, it’s amazing to think that for each pound of aluminum recovered, we save the resources needed to generate about 7.5 kilowatt-hours of electricity. That translates into enough energy saved each year by recycling aluminum to meet the lighting needs of a city the size of Pittsburgh for six years, according to CMI. Let’s keep up the good work and continue to keep those cans out of our landfills.