The Power of We: One resident’s concern grants an entire apartment building access to curbside recycling. 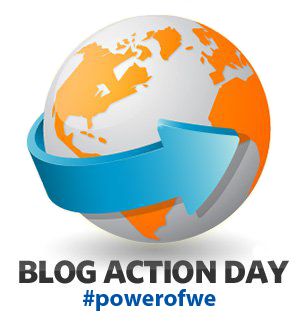 I am always eager to hear what the year’s Blog Action Day topic is going to be, and when it was announced earlier this year that “The Power of We” is the 2012 theme, one particular story came surging to mind. “The Power of We” can mean a lot of things bloggers around the world, but to me, it describes the way that each and every one of us can have a positive, earth-changing influence on others. All it takes is some dedication. Though this story is an example of change on a small scale, it is intended to inspire others to be difference makers. A few years ago, I was living in a small apartment building in Phoenix. Before moving, I had not considered checking to see if the building offered recycling. But, as I moved in and began unpacking and piling up packaging waste, I quickly realized that all chutes led to the dumpster. No recycling barrels were in sight. With a mound of cardboard boxes and crumpled newspaper up to my ears, I started making some calls. First, I called the city. I was told the building qualified for curbside recycling pick-up, but the management company needed to set it up (tenants do not have this authority). So, I called the building’s management company. To my surprise, I was told that the residents had never inquired about recycling. I was told it was not a priority at that time. Miffed, I started knocking on neighbors’ doors. I collected signatures from those who supported acquiring recycling bins. Surprisingly, other residents had the same complaint. They wondered why recycling was simply not an option from the day the building opened, and encouraged me to call back and demand it. It worked. After fielding my calls, the management company had the city install recycling barrels in the alleyway abutting the building. Thanks to a smidgen of concern and a decision on a whim, a dozen more residences were granted access to recycling (and, from the looks of the barrels during those first weeks, a stockpile of recyclables were at the ready). It did not take much to make a change. Maybe 45 minutes of my time was dedicated to this cause, and now, years later, tenants can still recycle at that building. Remember this when thinking about the Power of We, and how it can change our environment for the better.