The Clean Bin Project: The One with the Least Garbage Wins!

An effort to live a zero-waste lifestyle turned into a friendly competition and prevailing lifestyle for two Vancouver, British Columbia, Canada, roommates.

Across the cybersphere, people continue conducting their own unique and sometimes-radical lifestyle experiments while documenting the results for all to see. Some are light and fun, as was the case with Julie Powell’s yearlong effort to cook her way through Julia Child’s Mastering the Art of French Cooking (which resulted in a subsequent book contract and a Meryl Streep movie), while others are a bit more planet changing and weighty, such as Colin Beavan’s deeply committed green lifestyle revamp (which, yes, birthed a book and film). Interested in promoting the idea of sustainable fashion while also raising funds for Mumbai’s nonprofit Akanksha Foundation, Sheena Matheiken launched the Uniform Project, in which she donned the same basic black dress spruced up with an ever-changing lineup of diverse vintage, handmade and otherwise repurposed fashion accessories for the span of an entire year. For five years, Beth Terry from My Plastic-Free Life has maintained an online diary detailing the great lengths she has gone to purge petroleum-based plastics from her personal environment, an effort that has proven to be incredibly illuminating given the fact that the manmade material has become deeply embedded in practically every corner of modern society. 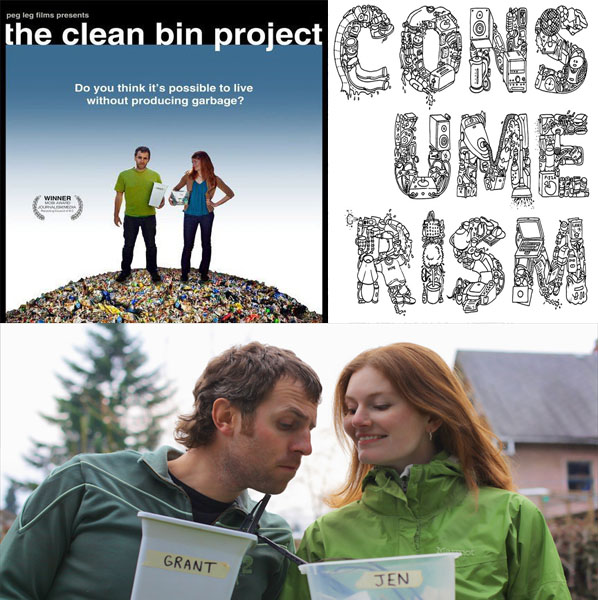 Well, Jen Rustemeyer and Grant Baldwin followed in the footsteps of their fellow changemakers, except instead of limiting their fashion choices or cutting plastic from their repertoire, they pursued a decidedly more aggressive path through The Clean Bin Project. From July 1, 2008, to July 1, 2009, the Vancouver, British Columbia, Canada-based roommates committed to living an entirely consumer-free lifestyle — the “winner” being the person who produced the least amount of waste at the conclusion of that time period. These were their ground rules: The idea of eliminating the waste that you personally produce for just one day seems tough, but extending that commitment throughout a 365-day period? Daunting, indeed! As Rustemeyer and Baldwin expressed in their daily blog and award-winning documentary film, breaking deeply ingrained habits proved to be the most challenging aspect of their entire project, however, with practice, they soon realized that they were not compromising their lives one single bit. In reality, they ended up enriching them. They did embrace a few handy little tricks along the way that easily apply to those of us who would like to follow suit by treading a bit lighter on the planet. In order to ensure their anti-consumerism success, the roomies gravitated toward purchasing package-free bulk essentials first and foremost. When that option was not available, they reached for items sold in recyclable paper and then finally glass packaging, in effect following a strategic “precycling” method of shopping that undoubtedly helps Mother Nature. There is no question that through their efforts, Rustemeyer and Baldwin have served up a fresh take on eco-awareness that fits particularly well within today’s trend toward self-sufficiency and green living. In keeping with their continually sustained eco-attitude, they happily dispense basic waste-reduction tips, greener product options and DIY recipes to interested parties, as well as the opportunity to host Clean Bin Project film screenings no matter where you reside.