My green resolution: Cut back the extra drain standby power has on the environment and my wallet. 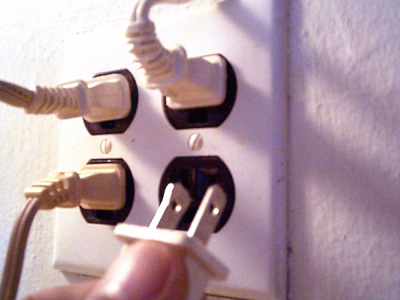 It’s just a phone charger — only an average of 0.26 watts drawn when in standby mode. But then there is that flatiron plugged into the bathroom wall. Oh, and my laptop next to the tangle of power cords that make up my bedroom entertainment system. Maybe there is more than a little “just” going on here. Five to 10% of residential electricity use comes from standby power, which is also accountable for approximately 1% of global CO2 emissions. And, in a society fueled by things that run on energy, fully eliminating standby power in a home is a tedious and nearly impossible task. There are informed and feasible steps, however, that one can take to significantly reduce the consumption of phantom power by at least one-third, according to the U.S. Department of Energy’s Lawrence Berkeley National Laboratory. This is all about making behavioral changes, but no one said that resolutions were supposed to be easy. So, here it goes, my plans to make my home (almost) vampire power-free in 2013. Step one: Go room to room, and locate each outlet. What is plugged in right now? Does it need to be? Objects like cell phone chargers, oscillating fans, my laptop, the printer, DVD players, TVs, gaming equipment, the DVR receiver, lamps, hairstyling products, the coffee maker and the microwave do not need to be sucking up external power 24/7. Step two: Do something about it. Unplug these items, and keep them unplugged until they are needed. I will invest in power strips with surge protectors so that I can easily switch my computer, printer and living room and bedroom entertainment systems to zero power with a single push. As a way to help reinforce the “no plugged-in device left behind” campaign, I am fully committed to setting up daily reminders on my cell phone to nudge that “turn off and unplug” conscientiousness until it becomes second nature. (Speaking of cell phones, charging by night is no longer an option. No cell phone requires that length of time to recharge.) Taking into account the times of day when I ramp up the AC or do my laundry can also help save some of this power. For example, ABC News suggests turning on the air conditioning before 2 p.m. and using ceiling fans to cool off during the highest electricity hours. Waiting until later in the day to do a load of laundry works the same way. Step three: See how well I’m doing. If about 10% of my electric bill is devoted to parasite power, I should save almost $100 a year. While I may not reach that savings exactly, it is important to note if there has been a decrease to gauge my success each month. Incentive: that extra money will definitely be put to great use during next year’s holiday season. Step four: Be proactive. Buying low-standby products for future use supports my goal. Though these devices are sometimes difficult to identify, the U.S. Department of Energy’s Lawrence Berkeley National Laboratory recommends Energy Star-endorsed products as a go-to choice. Learn more about standby power at the department’s website, and see what gadgets in your home are racking up your electric bill with this chart.