The Results are In: 2012 Game Day Challenge Winners 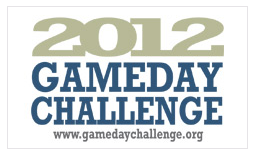 Who will be crowned the BCS National Champion tonight? Sorry Notre Dame and Alabama. The college football fans across the country have spoken and there are already four winners, not just one. The winners of the 2012 Game Day Challenge — the friendly recycling competition among U.S. colleges and universities — are: Earlham College, Ohio State University, Franklin College and the University of Nevada-Las Vegas. The goal of the Game Day Challenge is to increase recycling and composting at college football games. As part of the challenge, more than 75 schools across the nation collected cans and bottles, cardboard, food waste and more from the tailgate areas, stadium seating and concessions  during at least one 2012 regular season home football game. Schools measured and reported their results along with game attendance to be ranked in five separate categories, the winners of the 2012 Game Day Challenge are: More than just a competition, Game Day Challenge is an opportunity for colleges and universities to demonstrate to students and team supporters that recycling and reducing waste are not activities limited to the home or office. Many participating schools deployed teams of volunteers to collect cans and bottles from pre-game tailgaters. Other schools set up zero-waste stations inside the stadiums to collect food waste and more, or arranged for special recycling messages to be announced during the game. Still more schools used the opportunity to celebrate and raise awareness of America Recycles Day on Nov. 15. “The Game Day Challenge was a big success at Auburn,” said Courtney Washburn, recycling coordinator, Auburn University. “It was a great way for us to raise awareness about waste reduction and recycling with the fans, and it also helped us to engage our athletics’ department about sustainability issues.” Reducing waste generated at collegiate sporting events can save energy and reduce greenhouse gas emissions. During this year’s competition, 5.4 million fans at 79 participating schools kept nearly 1.09 million pounds of game-day waste out of landfills, which prevented approximately 1,732 metric tons of carbon dioxide from being released. That’s equivalent to removing over 8,800 passenger vehicles from the road for a year. For more information about participant results: gamedaychallenge.org/results/ For more information about how the results are determined: gamedaychallenge.org/measuring-and-reporting/ For a list of participating schools: gamedaychallenge.org/participating-schools/ The 2012 Game Day Challenge was administered by the College & University Recycling Coalition (CURC), Keep America Beautiful (KAB) and RecycleMania, Inc., with support from the U.S. Environmental Protection Agency (EPA). Many schools will take the Game Day Challenge spirit campus-wide this coming winter with the RecycleMania Tournament, an eight-week competition that includes additional materials such as paper and scrap electronics. Kicking off Feb. 3, this year’s RecycleMania will include a brand new basketball game-day category modeled on the fall Game Day Challenge.

About the College & University Recycling Coalition

The College and University Recycling Coalition (CURC) is a membership-based nonprofit organization whose mission is to advance recycling and sustainable materials management at colleges and universities.  CURC represents a vibrant community of recycling professionals in higher education on over 800 college campuses across the United States. CURC members connect with each other through an active email listserv and at gatherings in conjunction with state and national conferences. CURC provides support to collegiate recycling programs through technical assistance, education, and training, including a webinar series, annual workshops, and the development of best-practices manuals and toolkits.

Keep America Beautiful is the nation’s leading nonprofit that brings people together to build and sustain vibrant communities. With a network of more than 1,200 affiliate and participating organizations including state recycling organizations, we work with millions of volunteers to take action in their communities. Keep America Beautiful offers solutions that create clean, beautiful public places, reduce waste and increase recycling, generate positive impact on local economies and inspire generations of environmental stewards. Through our programs and public-private partnerships, we engage individuals to take greater responsibility for improving their community’s environment. For more information, visit kab.org.

RecycleMania was launched in 2001 as a friendly challenge between Ohio University and Miami University to increase recycling on their campuses. The contest has expanded from two schools in 2001 to 605 colleges and universities in 2012 spanning all 50 states, the District of Columbia, Canada and the U.K. Over an eight-week period, campuses compete to see which institution can collect the largest amount of recyclables per capita, the largest amount of total recyclables, the least amount of trash per capita, or have the highest recycling rate. For complete competition background and details, visit the RecycleMania website at recyclemania.org.