What’s in Your Fridge?

Breaking down a refrigerator’s different components can help consumers understand the need for safe recycling.

When it comes time to dispose of white goods (another term for large home appliances) there are lots of good reasons you should choose a recycling program instead of the landfill. Recycling appliances like refrigerators, washing machines and hot water heaters saves valuable landfill space and also recovers materials like steel and copper that can be reused. But, there is a lot more than just metal that can be pulled from that old dryer or freezer. Most of our home appliances also rely on chemicals that, while useful, can also be hazardous to the environment when not disposed of properly. This is especially true of refrigerators. 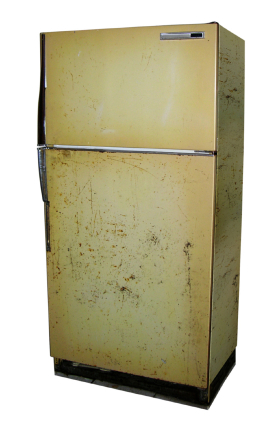 In the 1930s, the invention of Freon, the trademarked name for a mixture of chlorofluorocarbons (CFCs), changed the world of refrigeration. While previous models of refrigerators had relied on dangerous chemicals like ammonia and sulfur dioxide to keep food cool, CFCs were believed to be safer. Now, of course, we all know that CFCs, while less dangerous to the home’s occupants, are extremely bad for the environment, and have contributed significantly to ozone depletion. The use of CFCs as the coolant in refrigerators was banned in the U.S. starting in 1995, but CFCs were still used to produce insulating foam until 2005. As CFCs are being phased out of refrigerators, they are being replaced by hydrofluorocarbon (HFC) refrigerants and insulating foam. While HFCs pose less danger to the ozone layer, not surprisingly, they have not proven to be a perfect replacement. In fact, according to the Intergovernmental Panel on Climate Change, HFCs are now known to be a potent greenhouse gas whose effect on the atmosphere is 3,830 times that of carbon dioxide over a 20-year period.

At its heart, a refrigerator is a machine just like any other, and machines need oil in order to run smoothly. In particular, oil is needed to provide lubrication for the compressor (which heats the refrigerant gas by compressing it), which means that when refrigerators are disposed of, that oil needs to be removed. Most home fridges do not hold a lot of oil — anywhere from 2 to 8 ounces on average, according to the EPA’s Safe Disposal of Refrigerated Household Appliances — but multiply that amount by the 9 million refrigerators that get thrown out every year, and it quickly adds up.

Older fridges can have a number of other hazardous chemicals hidden in their mechanical parts. Those built before 2000 likely contain a small amount of mercury in switches and relays that professional appliance recyclers can recover for reuse. Much older models — those made before 1980 — will also have capacitors that contain PCBs, a carcinogen that is no longer manufactured in the U.S.