Rebound and Recycle: Greening the Game at Duke

Could the “Cameron Crazies” become as passionate about recycling as they are for Blue Devils basketball?

Even the most casual of college basketball fans knows of the “Cameron Crazies,” the title given to Duke University’s raucous 1,200-occupant student section at Cameron Indoor Stadium. Famous for their synchronized, high-decibel chants and often painted blue, the Crazies are known as perhaps the most daunting student section in all of college basketball. But, could they also be known for recycling? If Duke’s Recycling and Waste Reduction Program Coordinator, Arwen Buchholz, has her way, Cameron Indoor will become equally famous for its commitment to green game-time operations. 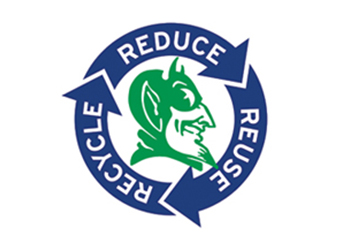 Recycling bins started quietly popping up around the 9,314-seat arena in 2007. By the beginning of the current 2013-14 season, there were between 15 and 20 recycling locations around the Cameron Indoor concourse. Since those humble beginnings in 2007, Duke Athletics has jumped on board to help facilitate recycling at all Blue Devils athletic events. Following each game, a local nonprofit comes in to clean the stands and separate trash and recyclables. All recyclables are then transported to recycling trucks to begin processing. Looking back on these past few seasons, Buchholz is truly impressed with the growing bond between Recycling and Waste Reduction and Duke Athletics. She goes so far to say, “Athletics has been walking the walk and putting their money where their mouth is over these last few years.” Now, weekly game-day operations meetings provide a platform for the two sides to properly plan for upcoming games and occasional special events, such as football tailgates, nationally televised games (of which Duke has many) and even Krzyzewksiville, a sort of makeshift camping community of student fans who set up tents and live on the grounds surrounding the arena well before Duke’s biggest home games of the season. “During the season, Athletics requests bins to be placed down on the court level [of Cameron Indoor],” Buchholz explains. “Bins are found at all entrances, where all people line up and even where all those crazy students camp.” For now, plastic beverage containers — soda bottles and limited-edition commemorative cups — are collected for recycling. Buchholz says that they are not pushing for items like pizza boxes, flyers and programs at this time, though that will be changing soon. “We will be switching all of campus to a single-stream collection system,” Buchholz reveals. “When we do that, all the signage on the bins in the concourse will reflect that change.” 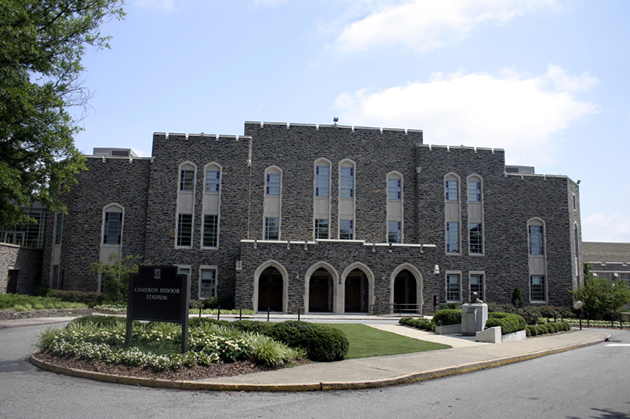 Duke measures all of its game-day landfill waste by using a compactor on campus. But determining targeted recycling rates for Blue Devils home games is a tougher task accomplished by the occasional event audit. Buchholz says that the program has audited two basketball games before, wherein an assortment of trash from the game cleanup was collected examined to determine what could have been recycled and what could have been composted. Nothing is set in stone, but the tentative plan is to compost at Duke football and basketball events in the near future. For now, composting is tested in other areas around the Duke campus. “Duke Sanitation and Recycling has some pilot projects going on in academic and residence areas where we are testing post-consumer compost collection,” Buchholz says. “Athletics is very interested in that. They are ready to purchase the bins to help facilitate compost collection from these [athletic] venues. They’re just waiting on facilities management to finish their research.” Through steady growth over time, each of these steps toward more sustainable game operations brings Duke closer to becoming as successful in recycling as it is on the court at Cameron Indoor Stadium. Despite not having literature or online resources available about game-time recycling options, a passionate fan base has made a commitment to sustainability. “We really have to thank athletics for making recycling a part of their operations,” Buchholz says. “We’re a team now. Together, we try to make game-day recycling work as best we can.”