Rebound and Recycle: Greening the Game at Virginia Commonwealth

The Siegel Center’s is one of the most thorough recycling programs of any arena in the U.S. 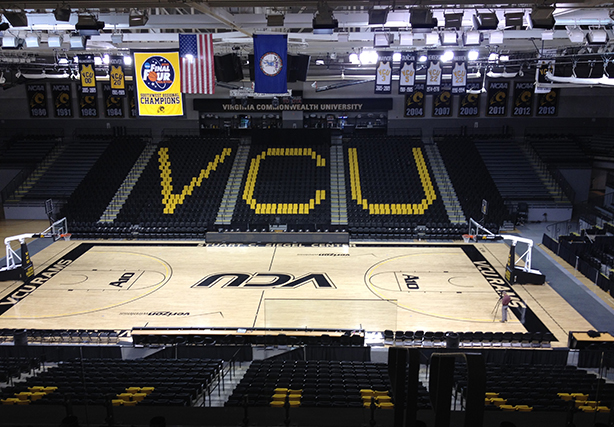 One of Richmond, VA’s hottest tickets in recent years has been the Virginia Commonwealth University men’s basketball team. Following an improbable run all the way to the Final Four in 2011, the Rams and coach Shaka Smart are no longer a secret on the hardwood. Though the Rams’ NCAA tournament performance in March 2011 generated much interest in the university, it was not the first time VCU hoops has left its mark on Richmond. In fact, it has been a way of life for Richmonders since the Siegel Center, home to the Rams men’s and women’s basketball and women’s volleyball teams, opened in 1999. For the past 14 years, the Siegel Center has been one of the most difficult places for visiting teams to win in the whole country — well before the team’s meteoric rise to bust into the national hoops consciousness. The arena is home to one of the best home-court advantages around, but it may be its concourse recycling program that is actually tops in the U.S. “Inside the Siegel Center, next to 95% of the trash containers there are recycling containers for fans to utilize to divert items form being placed in the trash,” says Steven Heinitz, Recycling & Reuse Coordinator in VCU’s Office of Sustainability. 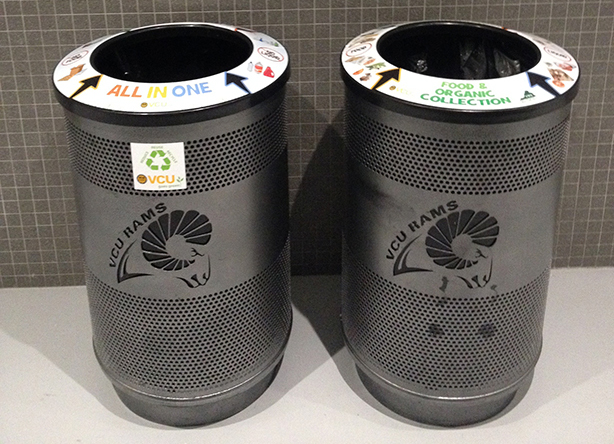 The Siegel Center’s is one of the most thorough recycling programs of any arena in the U.S. Far from typical arena recycling programs that may accept food and beverage containers and game programs, the Siegel Center recycles a wide range of materials, including cardboard, glass, metals, mixed paper and all plastic bottles numbered 1 through 7. Food and organic items can be dropped in accompanying compost bins as well. Heinitz notes that Styrofoam products are not accepted, and vendors are discouraged from using them in their event operations. Amazingly, batteries and light bulbs are also collected for recycling at Siegel Center — an accommodation that is truly unrivaled across other college arenas. One goal Heinitz wants to implement sooner rather than later: accurate tracking of the waste and recyclables going in and out of the arena. But, there are difficulties in producing accurate, timely results. “We are in the process of trying monitor the diversion rate for each basketball game,” Heinitz reveals. “[But,] it has been a challenge since the waste containers at the Siegel Center are also used by the Sport Medicine Building and the Fine Arts Center in the Bowe Street Parking Deck building.” Still, there is further work to be done at the Siegel Center. Heinitz recognizes the importance of spreading recycling awareness, particularly to VCU’s 24,000 undergrads, if the program is to continue improving and growing. “Currently, we do not a specific brochure or other marketing materials devoted to promoting recycling for events at the Siegel Center,” Heinitz admits. “[However,] I am in the process of establishing a Green Team to made up of student volunteers to assist with the promotion and collection of recycling during events. Last year, we had a pilot program at the men’s basketball games, and this year we plan to expand to all events held in the Siegel Center to increase our diversion/recycling rate.”