Rebound and Recycle: Greening the Game at UNLV

UNLV moves into a new era of recycling at the Thomas & Mack Center, where it aims to increase recycling rates. 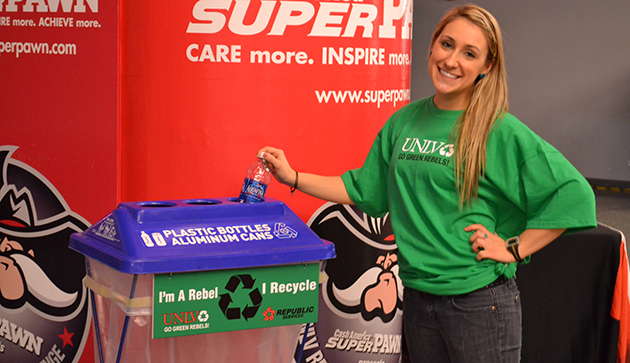 Tara Pike has a big job. As Solid Waste and Recycling Manager/Sustainability Coordinator at the University of Nevada at Las Vegas, Pike is in charge of meeting the waste demands of a rapidly growing major metropolitan university. The 332-acre UNLV campus, which lies just east of the Las Vegas Strip, has seen its enrollment creep past 27,000 students in recent school years. Keeping recycling rates up has been a difficult task, especially when it comes to UNLV’s athletic facilities — in particular, the Thomas & Mack Center, where the Rebels men’s basketball and volleyball teams play. Pike and her recycling crew have spent the past few years heavily focusing on spiking recycling rates at Sam Boyd Stadium, UNLV’s off-campus football home. Since the recycling crew itself is in charge of cleanup following home football contests, waste diversion rates have spiked. It’s a different story at Thomas & Mack. “The recycling crew is not heavily involved in recycling at Thomas & Mack right now,” Pike admits. “We do plan to change that in the future. [However,] we have a longstanding food waste diversion program at the arena. And, of course, we collect recycling from the arena offices on a weekly basis, although we do not weigh it separate from the rest of campus.” The university received 75 bins from the College and University Recycling Coalition Coca-Cola recycling bin grant program. Most of these bins ended up at Thomas & Mack, which previously had only 10 bins spread around the 18,776-seat arena. The original 10 bins, provided by UNLV’s student government, are now located outside the arena. The CURC bins have been strategically placed inside. 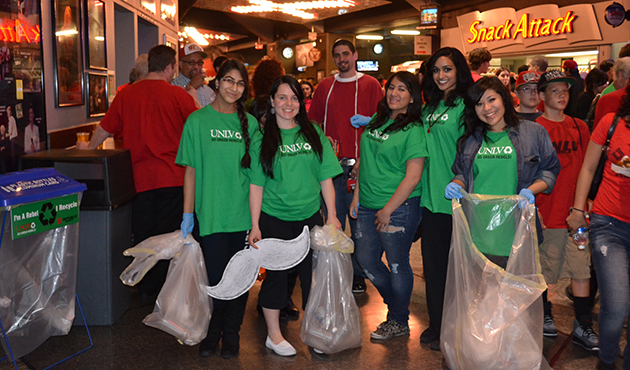 With dozens of spots for visitors and staff to drop off plastic bottles and aluminum cans, one would think that Pike is satisfied with the progress that has been made at Thomas & Mack. That is not the case. Though her crew is very much involved in the waste diversion at the football stadium, at Thomas & Mack, the arena’s custodial staff sets up and empties the recycling bins for all events. The recyclables are placed in specific areas outside the arena for Pike’s crew to collect. Republic Services, the recycling sponsor for Thomas & Mack and Sam Boyd Stadium, handles the recycling. “The program would operate better and get better results if the recycling crew was present like it is at Sam Boyd Stadium,” Pike admits. “We do plan on being more hands on in the future at Thomas & Mack, but we have been focusing longer and more intensely at the stadium the last two years. The recycling crew does not typically track waste diversion rates on a game-by-game basis, but they gave it a shot for RecycleMania’s first Basketball Game Day Challenge in March 2013. UNLV won the contest’s Food Organics category, diverting an average of 0.154 pounds per person during that single game. Other figures from that contest:
Now, the goal is for the recycling crew to be directly involved for a second year in a row during a game this season at Thomas & Mack. “I have an intern who will learn from the experience and formulate a plan so we can be more involved in 2015 by coordinating more games,” Pike says optimistically, adding, “he is also making a plan to improve the recycling at Sam Boy Stadium.” 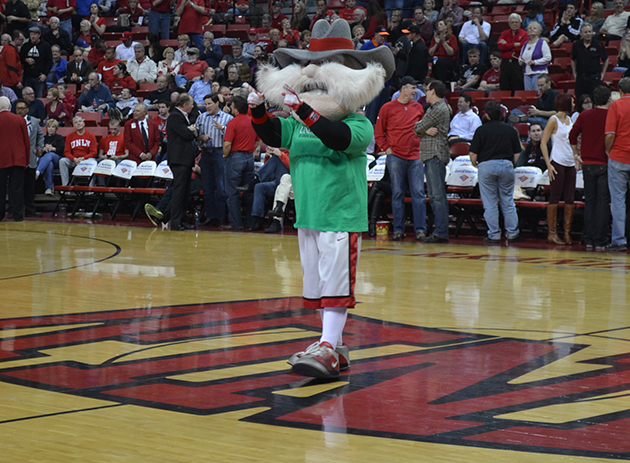 At present, recycling at Thomas & Mack is at a crossroads. Having met the basic first step of outfitting the arena with ample recycling bins, it is up to the custodial and recycling crews to figure out the steps needed to increase those waste diversion rates. Pike feels that there is one major challenge that will need to be addressed. “If a fan is on the concourse, I think it is convenient for them to find a recycling bin,” she says. “[But,] many fans leave their trash at their seats and leave. The challenge with basketball is that the games are late. At Sam Boyd Stadium, we have a crew of students that go through the stands and collect the recyclable and compostable materials. We struggled with getting enough students to help at the basketball game because they end late in the night.” Thomas & Mack’s trash crew comes through after the final buzzer and tosses everything away. If a recycling crew cannot divert the material in a quick and timely manner, it will be trashed. Basketball recycling is easier in some respects than football, but more challenging in other ways. How the university resolves this issue is paramount in determining the long-term success of the arena’s recycling program. For now, spreading the word about increasing recycling participation during the upcoming Basketball Game Day Challenge is a great next step.