Rebound and Recycle: Greening the Game at Kansas

The university’s Rock Chalk Recycle program has made recycling at Allen Fieldhouse more convenient than ever before.

Lawrence, KS, is smack dab in the heart of America, and it stands at the heart of its basketball consciousness as well. Since 1955, Allen Fieldhouse has been the home of the University of Kansas Jayhawks basketball team — a team that ranks second all-time in number of wins and holds the third-highest win percentage of any collegiate hoops squad. The three-time NCAA tournament champs have called 1651 Naismith Dr. home for nearly six decades now. Beyond the basketball heritage found at this address, there is an increasing focus on banishing waste from game-day operations. It’s a tall task at an arena that seats 16,300 hungry and thirsty fans, but the university’s Recycling Operations Coordinator, Manny Abarca, has risen to the challenge. Abarca tells 1-800-RECYCLING that the relatively new Rock Chalk Recycle Initiative —the name is a play off of the “Rock Chalk Jayhawk” chant that is famous in these parts — has helped to recently coordinate new recycling, composting and refuse procedures at Allen Fieldhouse. “In previous years, recycling was done only during the bowl pick [for] specific materials,” Abarca says. “This year, with the launch of the RCR initiative, massive expansion has occurred in the Fieldhouse. Additional partnerships and collaborations have been created to focus on increasing diversion from our pre-game loading processes, end-of-game concessions cleanup and post-game bowl pick.” Abarca’s passion for diverting waste and the university’s desire to operate games with a smaller footprint is the perfect combination. These recent waste-diversion improvements at Allen Fieldhouse are all part of a big-picture scheme that will help ensure Jayhawks home games are as green as they can be. Future supply-chain changes to facilitate maximum recycling and composting within the facility are already in the planning stages, and Abarca and company are now tracking waste diversion rates on a game-by-game basis. “In previous years, we have kept minimal [waste diversion] statistics on these games, but now we have created a relationship with our vendors to receive nearly 100% accurate weights per game, through direct weights as opposed to estimates,” Abarca says. 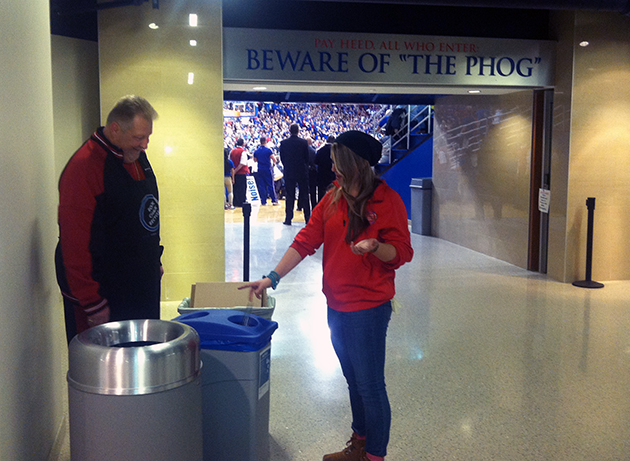 Since the RCR initiative debuted at Allen Fieldhouse, recycling receptacles have increased threefold around the arena concourse. For the first time ever, fans visiting the arena can compost and recycle everywhere they can landfill their waste. At press time, the program has diverted more than 20,000 pounds of recyclables (aluminum cans, beer and soft drink boxes, glass bottles, plastic bottles and plastic cups) and organics (food, napkins and paper plates) at Kansas athletic events. However, each of these increases in waste efficiency have not come without challenges. Careful planning and strategic tweaks to the program have been necessary. Yet Abarca knows every bump along the road is worth it. “KU Athletics has been amazing, opening their entire organization to ensure the success of this initiative,” he says. The university’s marketing team is one group that Abarca singles out. They have put together a unique fan experience to encourage recycling — going above and beyond the university’s peers to create a series of eye-catching in-game promo videos with some of KU’s most recognizable faces, including university chancellor Bernadette Gray-Little and head basketball coach Bill Self. “As we perfect the program’s operations components, I am confident there will be more collaborations to spread the word about recycling events and other opportunities,” Abarca forecasts. “The idea was to create a culture of waste diversion at KU, and I believe we are well on our way to doing just that with the help of many friends here at the university.”