What Happens to My Old Television When it is Recycled?

Those big, boxy televisions are obsolete in the U.S., but that does not mean they have disappeared. 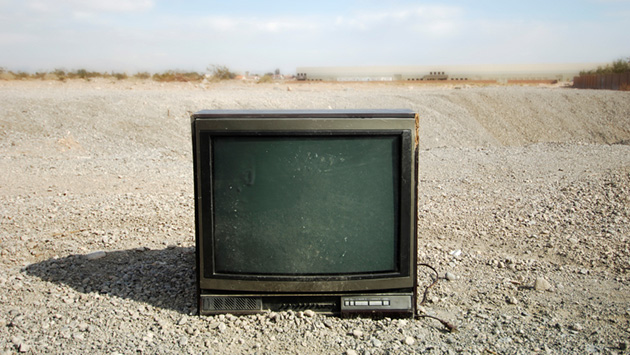 Remember those old bulky television sets? The ones that brought the antics of The Mary Tyler Moore Show or the drama of Twin Peaks into your living room? How about those old computer monitors? The heavy models on which you learned to type in front of a thick, glowing green or amber screen? Those big, boxy electronics are obsolete in the U.S., but that does not mean they have disappeared. In fact, an article in The New York Times says there are more than 200 million of these units sitting in American homes just awaiting disposal. All types of electronic waste present a challenge for recyclers, but televisions and monitors are particularly difficult to deal with. Older models contain a cathode ray tube (CRT), which is the large triangular glass contraption that makes up the bulk of the monitor. According to the same New York Times article, the glass in a CRT can contain up to 8 pounds of a lead, a layer of cadmium-based phosphorous and other dangerous heavy metals. “You can touch the glass, you can lick the glass, and you’re not going to get lead poisoning,” says Aaron Blum, co-founder and Chief Compliance Officer at Electronic Recyclers International, Inc., a California-based company that recycles 250 million pounds of electronics annually. However, once that glass enters a landfill, it is likely to break. When that happens, the lead and other toxins can leach into soil and water. ERI is one of the brave few willing to handle these bulky, hard-to-recycle items. Blum took a few minutes to explain the process for correctly stripping down and recycling a CRT television or monitor. First, a worker hand dismantles each television or monitor, separating out the different components. The plastic, wood and copper coil found on the back of the CRT can be sold on the commodities market and turned into new products. The circuit boards go to specialized recyclers that reclaim the gold, platinum and other precious metals. The CRT itself is made up of three parts: the panel (the glass on the front), the funnel (the part behind the glass that narrows to a point) and the frit line, which attaches the two pieces together. The three pieces are carefully separated for recycling. The panel is coated in phosphorous, which must be removed and destroyed as hazardous waste. But, once the phosphorous is gone, the panel glass can go back into manufacturing new televisions. All the lead remains embedded in the glass, so it does not pose a threat. The glass in the funnel can also be reused. Blum says it is used in slim-fit CRT TVs, a thinner version of the machines many Americans grew up with, which are now popular in South America and Asia. Newer television models will create different challenges. Many contain mercury, another heavy metal, and the screens cannot be reused in new televisions. With any luck, recyclers will come up with a solution long before 200 million of them become obsolete. Watch below to see how ERI safely dismantles televisions to begin the recycling process: Disclosure: Electronic Recyclers International is the parent company of 1-800-RECYCLING.