How to Recycle Cans

Both aluminum and steel are in high demand. They fetch a decent price on commodity markets, and almost every community has a program for recycling them. 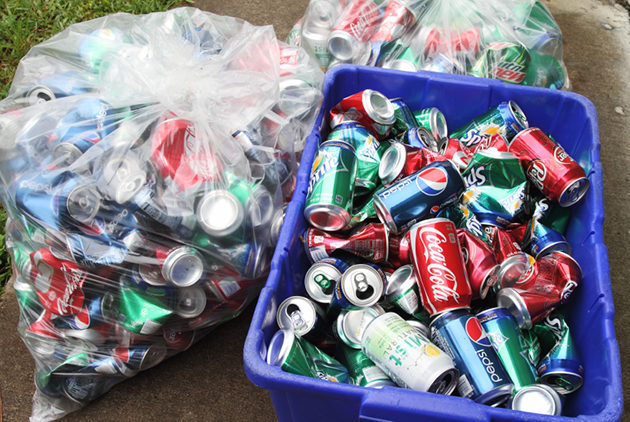 This article provides tips on recycling two common household items: aluminum cans and steel food cans (also known as tin cans). There are precious metals and then there are non-precious metals. But, every recycler knows that all metals are precious. They are eminently usable and reusable; getting new metals requires destructive and expensive mining, and we will run out of them someday. It seems crazy to have such a valuable resource sitting in landfills or being destroyed in incinerators. Both aluminum and steel are in high demand from manufacturers. For that reason, they fetch a decent price on commodity markets, and almost every community has a program for recycling them.

Aluminum cans have always been recycled

The most common use for aluminum cans is holding beverages. Sodas, beer, energy drinks and more line the shelves at supermarkets and convenience stores around the country. Aluminum goes into other food storage products such as foil and pie tins, all of which can be recycled assuming they do not have too much food or grease on them. Aluminum has plenty of other uses as well, including wiring, window and picture frames, cookware and lawn chairs. Coors Brewing Company, based in Colorado, was the first beverage company to put its beer in aluminum cans in 1959. Coors found that aluminum cans preserved flavor better. And, the company believed in recycling — consumers who returned their beer cans to the brewery received a penny for each piece. Royal Crown Cola was the next company to buy into aluminum cans in a big way. It started packaging its RC Cola and Diet Rite brands in aluminum in 1964. One of Royal Crown’s main reasons: It was easy to print nice graphics directly on the can, which helped it increase brand awareness and market share. Aluminum was also strong enough to withstand the considerable pressure of carbonating sodas. More companies jumped on board in the 1960s and 1970s, and by the 1980s, the aluminum can was considered the king of all beverage containers. When companies first started using aluminum cans they weighed about 3 ounces. Today, thanks to advances in technology and a concerted effort to reduce the amount of material used in packaging, the average beverage can weighs less than half an ounce.

Aluminum is made from a mined substance called bauxite. The bauxite is refined to remove aluminum oxide, a white powder with the consistency of sugar. Electricity is applied to the aluminum oxide to separate the aluminum from the oxygen. Small amounts of additional metals are mixed with the aluminum to prevent corrosion and add other beneficial characteristics. All told, it is an expensive and energy-intensive process. According to the American Beverage Association, aluminum cans that are ready to be recycled are transported to a specialized manufacturer called a smelter. They are tested for moisture content, shredded, heated to remove any paint on the outside, and brought to their melting temperature of 1,400º F. The liquid metal is poured into bars called ingots, which can weigh up to 40,000 pounds. Each ingot is then flattened into aluminum sheets that become the raw material for cans. Those sheets, which can be more than 5 miles long, are put onto rolls and shipped to manufacturers. It takes a tremendous amount of energy to make brand-new beverage containers, but when manufacturers use recycled cans it reduces their carbon emissions by a whopping 95%. According to the Can Manufacturers Institute, which has some nifty recycling infographics on its website, nearly 106,000 cans are recycled in America every minute. Thirteen aircraft carriers could be built from the aluminum cans recycled in 2011 (if aircraft carriers were made of solid aluminum, of course).

Where to recycle aluminum cans

Ten states, including New York, Vermont and Hawaii, have bottle bills, meaning you can return soda cans for a deposit. In these states it is easy to find a recycling center; most grocery stores will take soda cans and give you a refund. Americans have earned $25 billion recycling aluminum cans since 1976, when the first bottle bill was enacted in Oregon. Most communities with a curbside recycling program will accept aluminum cans. If they do not, use our recycling search engine to locate a recycler in your community. It is best to rinse cans out before recycling them. It cuts down on the smell, stickiness and drippy mess your local recycler has to deal with while processing your cans. Many charities accept soda cans as a fundraiser. They are able to return them directly to aluminum recyclers for cash. Ask around to see if any organizations in your area collect cans. In certain places, the Ronald McDonald House will take just the pull tabs from soda and soup cans. They reason that the tabs are less smelly, less sticky and easier for people to store and transport. Check with your local charity to see if they have such a program.

Many people still think of food as coming in tin cans. In fact, in the U.K., canned foods are often referred to as “tinned foods.” These days, the term “tin cans” is a misnomer. It dates almost all the way back to the invention of canning. Frenchman Nicolas Appert, who used heat to seal and preserve food for Napoleon’s army around the turn of the 16th century, was the first person to successfully can food. He was granted a 12,000-franc reward for his efforts. Englishman Peter Durand was the first person to put food in cans made of tin in 1810. His cans, which were rolled by hand, were so thick they had to be opened with a hammer or other tool. Over time, cans transitioned to being made by machines instead of individuals. They grew thinner and, with the invention of the can opener in 1850s, easier to open. For a long time, cans were sealed with lead solder, which meant the dangerous heavy metal could leach into foods. But, that practice was abandoned long ago.

Today, most food cans are made of steel. Manufacturing is a highly mechanized, sterile process that involves stretching metal into the familiar cylindrical shape, stamping the ridges on them (which helps the can stand up to pressure during processing), cleaning them and using a mechanical eye to check for defects. For more details on how cans are made, check out this cool video called “How tin cans are made today” on the BBC website. The inside of most cans is coated with food-grade epoxy to prevent any metal from leaching into the food. The downside to this practice: That epoxy usually contains BPA, a plastic hardener known to cause a host of health problems. And, you can’t always trust the packaging: In 2009, the nonprofit Consumers Union released a study showing that many canned foods that claimed to be BPA-free really were not.

The Can Manufacturers Institute reports that recycling steel cans saves 74% of the energy used to produce them. Taken annually, that savings is enough to power all the homes and businesses in the city of Los Angeles for eight years. In addition, recycling a ton of cans saves more than 1 ton of iron ore, 1,400 pounds of coal and 1,200 pounds of limestone. Any way you slice it, recycling cans is a really good idea. As with aluminum cans, it is a good idea to rinse out food cans out before recycling them. Most communities with a curbside recycling program will accept them in the bin. If they do not, search our site for a recycler in your community. There are a couple questions about can recycling you might want to ask your local recycling agency: Many communities used to ask recyclers to remove labels from cans before putting them in the recycling bin. It does not appear that this practice is used anymore. But, if you have the time and the inclination, removing labels may give the paper fiber a better chance of being recycled. Food cans are handy for a number of craft projects, many of which can be done with kids. It is easy to turn them into pencil cups, vases and planters. Group a bunch together and they make great organizers for office or craft supplies. To make a cool light fixture, carefully form a design in the side using a drill to punch a series of small holes. Put a candle inside the can and watch the light shine through.