How to Recycle Motor Oil

In the U.S., an estimated 61% of used motor oil is dumped — not recycled — yet drop-off points are located all across the country. 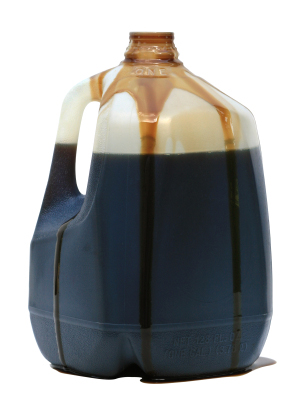 Americans purchase at least 640 million gallons of motor oil every year. But, that is just taking into account the people who change their oil themselves. When you figure that most people choose to have others change their oil for them, and that trucks, buses and other large vehicles require even more oil than cars, the figure starts to seem overwhelming. Motor oil will cause serious environmental damage if it is dumped down sinks, drained in fields or placed in garbage cans. And, yet that is exactly what happens to an estimated 61% of all the motor oil consumed in this country. Whether you own one vehicle or a fleet, it is vital to ensure your motor oil makes its way to a qualified recycler.

What is in motor oil?

Motor oil itself can be made from petroleum, synthetic chemicals or a blend of those two components. Depending on the type and brand, it can also have up to 15 additives designed to contribute a host of beneficial characteristics. Additives include engine-cleaning detergents that prevent the buildup of harmful sludge, seal conditioners that keep engine seals flexible and chemicals that prevent foam, rust and corrosion. Synthetic oil is typically preferred because it performs better and lasts longer. In some cases, purchasing synthetic oil means you do not need to change your oil as often, making it a better deal (and creating less of an impact on the environment). However, it is quite a bit more expensive than petroleum-based oils, and there are multiple factors to consider when picking a motor oil. Unless you are an expert, it is a good idea to check with an automotive professional to find out what oil is best for your car. Motor oil performs several functions designed to keep your vehicle running at peak performance. Most importantly, it lubricates the metal pieces in your engine to reduce friction and keep it running smoothly. Motor oil keeps the engine cool and prevents erosion. It is also responsible for catching things like silica and acids that result from the combustion process and can damage the engine.

Motor oil, where it is new or used, can do serious damage to waterways, humans and wildlife. No one wants to drink a petroleum product or something that contains ingredients with names like polyalphaolefins (a common chemical in synthetic oils). But, there is another serious problem with motor oil. As mentioned previously, oil picks up lots of nasty chemicals while it is trapped in the engine block. It also gets contaminated with heavy metals such as copper and zinc. This adds to the product’s toxicity and is another reason it is treated as hazardous waste by most states. The U.S. Environmental Protection Agency reports that 1 quart of oil can create an oil slick the size of two football fields, and that 4 quarts can contaminate 1 million gallons of fresh water.

How do I recycle motor oil?

The easiest way to recycle motor oil is let someone else recycle it for you. Oil-change companies such as Jiffy Lube and Valvoline Instant Oil Change have popped up everywhere in recent years. In addition, many car dealerships offer oil change services. All of these companies should have a policy on recycling motor oil, which can be cleaned and reused. Safety-Kleen, the country’s largest used oil processor, has a description of how they do the re-refining here. If you are going to recycle oil yourself, place it in a secure plastic container. You can use the bottle your new oil came in, but do not use food or chemical containers. There is some debate about whether beverage containers make good receptacles for used oil. The EPA strongly urges people not to use them, but a number of government agencies recommend people put old oil in gallon milk jugs for disposal. To play it safe, do not use other types of beverage containers, and clearly label milk jugs as containing oil so there are no mix-ups. Whatever type of container you use, secure it tightly with a lid so it does not spill during transport. Some communities accept used motor oil at the curb. In Portland, residents can put motor oil in the small yellow recycling box that holds glass. In Manchester, CT, homeowners can place up to 2 gallons of used motor oil next to their recycling bins every time they are scheduled for a pick-up. More than likely, though, you will need to take your used motor oil to a recycling center. Several states have businesses that act as collection centers. Retailers AutoZone and O’Reilly Auto Parts collect motor oil in most states in which they have locations. Many government-run recycling centers collect used motor oil as well. Residents of Cambridge, MA, and Louisville, KY, can take it to their local transfer station every day (although Louisville residents should note that oil is accepted only at staffed locations).

It is imperative to recycle old oil filters as well, since they are contaminated with the same stuff you want to keep out of the environment. Oil change centers should always replace your oil filter for you, but check to make sure they recycle it. If you are going to change and recycle the oil filter yourself, drain it completely (this can take 12 to 24 hours) and take it to a recycling center. Locations that accept motor oil will almost always take the filter as well.