A pilot program in Oregon may have discovered an efficient, eco-friendly way to reuse the base materials in old highway signs.

Each day, aluminum highway signs are pulled from our roads for a variety of reasons that renders the sign unusable. Many are damaged in accidents or over time, or their retro-reflectivity has degraded below the Federal Highway Administrations recommended tolerances. These signs can be very expensive for states to replace constantly, and it is often difficult to recycle them as well. However, the state of Oregon is looking to change that, while helping the environment at the same time. According to Governing.com, in 2012, the Oregon State Department of Transportation awarded a $150,000, two-year contract to Northwest Sign Recycling as a pilot program project. ODOT charged the privately owned company with the task of finding a simple, more cost-effective and eco-friendly way of reusing old signs. Northwest Sign Recycling, based in the central Oregon city of Prineville, distributed sign collection bins at State Highway Department locations throughout the state and began collecting old signs. Once the signs are collected, they are hydrostripped using a highly pressurized stream of water that removed the reflective coating. The signs’ letters and icons are then removed, leaving a blank, reusable sign. The surface of the aluminum sign is left smooth and clean, ready for a fresh new face. No chemicals are used in the process, and it eliminates waste in the landfill. But, why was the Oregon Sign Reuse program just a pilot? Lori Webb, Supply Operations Manager for the ODOT Office of Maintenance and Operations, says it is because the department needed to determine whether or not hydrostripping of signs damaged the anti-corrosion coating applied to the aluminum during the manufacturing process. “With the assistance of Northwest Sign Recycling, the research was able to determine that hydrostripping did not have an adverse effect on the anticorrosion coating,” Webb told 1-800-RECYCLING. “ODOT is continuing to utilize this contract under the contract extension option for another year and looking at the potential to request additional services for hydrostripping of extruded panel signs in the future.” Penny Eddington of Northwest Sign Recycling said that the program, which was piloted in 2012 and 2013, provided up to a 60% savings for Oregon’s sign budget, depending on the materials that ended up receiving hydrostripping. Some signs that are collected are not always usable as new signs because the thickness of signs has adjusted in accordance with changing specifications. However, ODOT reutilizes the material for other signs to keep materials out of the waste stream to the fullest extent possible. Additionally, if the signs are deemed by Northwest Sign Recycling to not be able to be stripped for ODOT’s use, the company then scraps the metal and returns the proceeds back to ODOT for scrap metal pricing, according to the contract specifications. We asked Webb and Eddington if there were any particular signs that were recycled and reused over others, and both said the 30-inch stop sign, attributing it to the retro-reflectivity mandate. Eddington also added that if the signs cannot be hammered out or deburred they are recycled and utilized in other ways, such as through the art installation shown, created by artist Marley Dawson in Washington, DC. 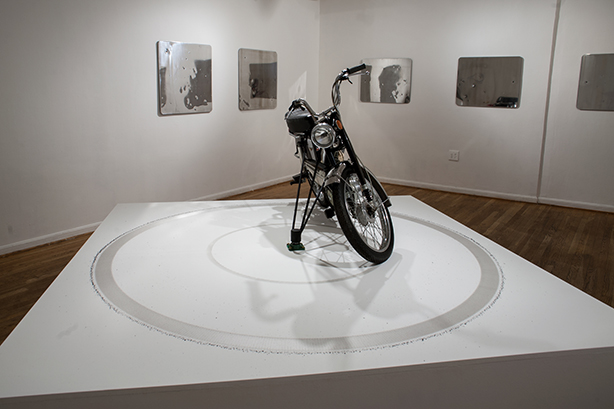 With state budgets being cut on a regular basis, we think that Oregon is certainly onto something here. In the first four months of the program, more than 500 signs were resurfaced and put back on state roads for reuse. We hope that other states are taking note, and that Oregon has set a new standard for other governments to save money, energy and improve sustainability.