How to Recycle Televisions

A lot of old TVs end up in landfills, but they can be recycled if you get them into the hands of the right vendor. 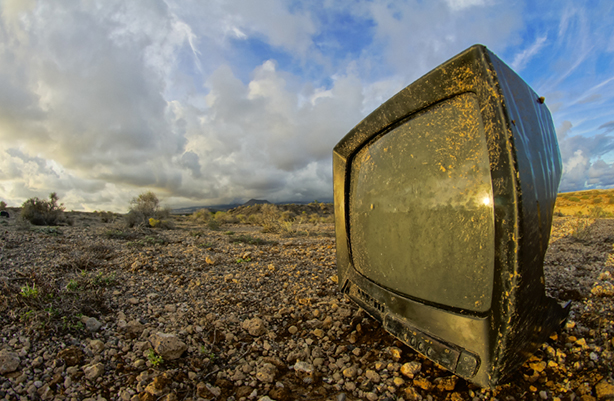 About 37 million brand-new televisions were shipped to the U.S. in 2012. When those machines made their way into people’s homes, they likely displaced an older or non-working set. What happens to all those obsolete televisions? Many of them find their way into the trash, which is a real shame. Televisions are tough to recycle. They contain lots of materials that can harm human health, which makes them expensive to take apart. In some cases, they are quite bulky, making them difficult to move around. In 2013, Baltimore’s Public Works Department began refusing televisions at its electronics recycling center and asked the public to take them to disposal facilities instead. This is probably a growing trend. Televisions can be recycled if you get them into the hands of the right vendor. Unless your local government sponsors an electronics recycling program, or the company that sells you a new television will take your old one for free, expect to pay a fee to get rid of it.

Televisions fall into two main categories: those with cathode ray tubes and those without. The CRT is the large, pyramid-shaped contraption attached to the screen that gives the monitor its bulk. The glass in the CRT contains up to 8 pounds of lead, a layer of cadmium-based phosphorous and other dangerous heavy metals. While it is in one piece, a CRT poses no threat to human health. But, if the glass breaks it can release the lead and other materials into the air. The danger and complexity required in processing CRTs makes them difficult and expensive to recycle. Flat-screen televisions are not much better. Older models with LCD lights in the screens can contain up to 20 tubes filled with mercury. The screens are harder to take apart, especially since workers have to worry about rupturing those tubes. Other materials in televisions include plastic, wood (from large console televisions), copper wiring and circuit boards.

Why it is important to recycle televisions

Like any other electronic device, there are a host of reasons not to toss your television in a dumpster:

How a television is recycled

To recycle televisions, workers typically start by taking them apart by hand and separating out the different components. The plastic, wood and copper are sold on the commodities market. The circuit boards go to specialized recyclers that reclaim the precious metals. Since CRTs have been around so long, the technology for dealing with them is relatively advanced. They are carefully taken apart, with the hazardous phosphorous going to disposal and the glass going back into manufacturing new televisions (all the lead stays imbedded in the glass, so it does not pose a health or environmental threat). Recyclers are still experimenting with the best way to deal with flat-screen televisions. Researchers at Purdue University in West Lafayette, IN, are working on tools to make recycling monitors with LCDs and LEDs safer and more cost effective. Check out this article for more on their efforts and further details on how televisions are recycled.

Where to take your television for recycling

Most Best Buy locations will take old televisions for recycling, either in the store or through a home pick-up service. Best Buy’s policies on e-waste take-back vary by state, so visit the company’s website to learn about the rules in your area. In Oregon, customers can take televisions with CRTs smaller than 32 inches and televisions with LED screens smaller than 60 inches to the store. Console televisions and CRT televisions larger than 32 inches must be picked up (there is a fee associated with this service). In some cases, Best Buy may take an old television for free if you purchased a new one from the store. Cities and counties have different ways of dealing with television recycling. In Cambridge, MA, residents are encouraged to place televisions at the curb for recycling. Those with screens smaller than 20 inches are picked up for free. Those with larger screens can only be picked up by appointment and must have a recycling sticker attached. Fairfax County, VA, holds monthly “Electric Sunday” collection events where residents can take electronics for recycling. Residents of Paradise, CA, and Charleston, SC, have more options — their recycling centers are open six days a week and always accept televisions. Do you have questions about whether a vendor is really recycling your television and not shipping it to a third-world country? Ask if they are certified through e-Stewards or R2 Solutions, two third-party programs designed to ensure vendors are handling your products responsibly. Nonprofits may take working televisions, either for use at their own organization or for sale in a retail thrift store. Be sure and check with them before dropping off your television, however. Many organizations will not take televisions because they are concerned about getting stuck with non-working machines and having to pay the high disposal fee.