How to Recycle Running Shoes

You should replace your running shoes every 400 to 600 miles. How can you make sure they don’t end up in a landfill? 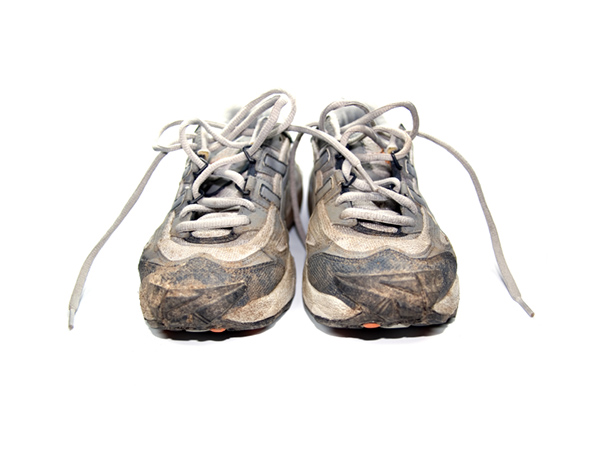 Millions of American cite running as their favorite way to exercise. The National Sports Goods Association reports that more than 29 million people in this country went running 50 or more days in 2012, an increase of nearly 3% over the previous year. It is safe to say that most of those people wore running shoes when they hit the sidewalks or parks near their homes. The NSGA says 44.6 million pairs of running shoes were sold in the U.S. in 2012, totaling a cost of more than $3 billion. All these shoes can add up to a lot of waste if they are not properly recycled. But, how do your turn an old shoe into a new product? Options to recycle running shoes are limited, but they do exist. Ways to reuse running shoes that are still in good condition are more widely available.

What are running shoes?

Call them sneakers, tennis shoes, trainers or tennie runners. Whatever name you want to use, we are talking about soft, comfortable shoes intended for running, working out, performing at athletic events or walking around every day. Running shoes have been around since the 1890s, when marathon runners started requesting custom-made shoes with spikes designed to help them increase their speed and agility. J.W. Foster and Sons, which later changed its name to Reebok, was the first to manufacture them. The first company to create what looks like a modern running shoe was New Balance. Its Trackster shoes, released in the 1960s, had soft, rippled soles that were supposed to help runners avoid shin splints. Nike running shoes, with its famous soles made in a waffle iron, debuted in the 1970s. Early tennis shoes were made of leather. Today, running shoes are made with a wide variety of different materials. The bottom part of the shoe is plastic or synthetic rubber. Some contain gel for extra cushioning. The middle is likely made of different types of foam. The upper (the part that covers your foot) could be comprised of cotton, mesh, Kevlar and even small bits of leather. Most have laces made from cotton, nylon or plastic (there are several companies that make shoelaces from recycled plastic bottles). Some have Velcro closures.

How often should you replace your running shoes?

Just like a memory foam mattress, the cushioning foam inside a running shoe will only last for so long before it begins to break down. Experts suggest that running shoes should be replaced after you have run 400 to 600 miles in them. This number varies by the type of shoe and how hard you work them, but this is a good rule of thumb. What if your idea of exercise is more like a brisk walk around the block with the kids? It can be hard to track how many miles you have traveled when you are not an avid runner. In a blog post on the New York Times website, running coach Tom Fleming recommends resting the shoe in one hand and putting the fingers of your other hand against the inside. If you can feel your fingers against your palm, it is time for a new shoe. Other coaches recommend listening to your body. If your shoes feel uncomfortable, it is probably time to buy a new pair and recycle the old ones.

How to reuse running shoes

If you are tired of your running shoes but they are still usable, consider donating them to a thrift store. They can be sold or, in some cases, given away to someone in need. There are a number of charities that specialize in getting tennis shoes to people who need them. Runner’s World, a magazine for running enthusiasts, has a great list of places that accept donated shoes. Examples include the Warren Striders Track Club, which donates the shoes to children in Ohio who cannot afford them; Sole Responsibility, an Ottawa, ON, Canada-based charity that sends shoes to various countries; and Hope Runs, a Kenyan organization that uses athletics to help empower children orphaned by AIDS. In most cases you will need to mail your shoes to these groups.

How to recycle shoe laces

If your shoe laces are still usable, you can remove them and put them to use around the house. You probably do not want to use them in craft projects, since they will have lots of accumulated dirt and sweat. However, they can be used to hang bird feeders or lights, tie up plants or tree limbs or secure bundles of kindling together.

How to recycle running shoes

There are very few places that recycle running shoes. The biggest is Nike, which takes old tennis shoes, grinds them up, and uses the shreds as a base material in athletic fields. In the past 25 years, Nike has turned 28 million pair of unusable shoes into 450,000 fields all over the world. You can recycle worn-out running shoes by taking them to Nike or Converse stores or mailing them to Nike’s Memphis, TN, recycling facility. More detailed instructions are available on Nike’s website. If your running shoes happen to be made by Patagonia, the popular manufacturing of outdoor gear, you can return them to the company for recycling. Get more information about Patagonia’s recycling program on its website. If all else fails, use those old running shoes as nontraditional pots or planters in your garden or window sill. That truly is an example of green reuse!