How to Recycle Helium Tanks 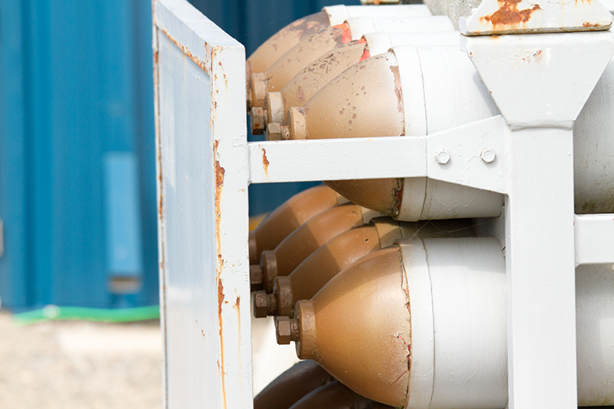 Helium is a naturally occurring gas that is lighter than oxygen. When it is pumped directly into balloons, they rise high in the air, delighting children and serving as an effective marker to help people find you at events or notice your garage sale sign as they drive by. While it is possible to buy prefilled balloons at the store, people in remote areas or those filling lots of balloons may choose to purchase a helium tank instead. When it comes time to dispose of that helium tank, is it possible to recycle it? The answer is yes, but take note: Helium tanks can be dangerous if not properly prepared for recycling. By taking a few easy steps you can breathe easy when you drop your disposable helium tank at the curb or your local recycling center.

Helium is an inert gas that poses no real threat to human health. It has all kinds of uses besides making balloons float. It can be found in MRI machines at your local hospital and the plants that make silicon wafers for electronics. It is also used in cryogenics, welding (it is helpful for protecting hot metals against the corrosive effects of oxygen) and quantum mechanics research. Most helium found in the United States comes from natural gas-rich areas of Texas, with Oklahoma and Kansas running close behind. Many people probably remember inhaling helium from a balloon and having their voice temporarily take on the pitch of the characters from Alvin and the Chipmunks. While this practice can be dangerous if repeated over and over, since it deprives the body of oxygen, there is no harm in trying it once. Helium tanks, much like propane tanks or fire extinguishers, contain pressurized gas that can explode if handled incorrectly. This is unlikely to happen around your house, but if a full helium tank goes into the back of a compactor truck or makes its way into an incinerator, it can blow up, hurting or even killing sanitation workers. For that reason it is extremely important to handle helium tanks with care and properly prepare them for recycling. In addition, the metal that makes up your old helium tank is very easy for a metal recycler to turn into something else. There is no reason to throw this valuable resource in the trash when it can have a second life as a useful product.

Look for a reusable helium tank

Balloon Time, a popular disposable helium tank manufacturer, notes that its tanks will fill 50 small latex balloons and 27 large Mylar balloons. If you need to fill a lot more balloons or want to avoid the hassle of preparing a helium tank for recycling, look for a reusable one instead of a disposable one. Many party stores rent helium tanks that you can return when you are finished. You can also purchase a large, empty tank and have it filled at a party store or industry supply company when needed. To avoid purchasing a helium tank, consider balloons filled another way for your big event. Balloons blown up by mouth are fun for kids to kick or throw around, and a balloon drop at a notable moment at a party is something people will remember. For a summer event, fill water balloons for an old-fashioned water fight. You can also ask yourself: Are balloons really necessary for my gathering? Balloons, especially helium ones that can float long distances, pose a threat to animals and kids if swallowed. The slippery latex material of a balloon is difficult to remove from a small child’s throat. Birds may mistake balloons for food and eat pieces of them. Those pieces will get trapped in their stomach and can lead to death.

How to recycle helium tanks

Balloon Time has handy instruction and a video that takes you step by step through the process of recycling its disposable helium tanks. The key is to make sure each tank is completely empty, then punch a hole in it and remove the valve so it is safe for recycling. Balloon Time’s tanks, like most others, are made of metal and can be mixed with other metal recyclables. However, where you can take your old tank for recycling varies widely. New York City will accept helium tanks with the valves removed through its curbside recycling program. Round Rock, TX, takes them only at the local recycling center. Alexandria, VA, will not accept propane tanks through its curbside program or at its local recycling center and asks residents to take them to a metal recycler instead. If you need help finding a recycling center or scrap metal dealer, use 1800Recycling.com’s handy recycling search tool. You can also call your local solid waste district and ask them about their recycling policies for helium tanks and where you can find recycling centers.