How to Recycle Video Games

Hard-to-recycle plastics plague video games of the past and present, but reuse options abound.

Video games are an extremely popular pastime in the U.S. The Entertainment Software Association shares that from 2005-2009 the video game industry grew seven times faster than the country’s economy overall, and that it will continue to grow at 5% annually through 2015. In 2012, the various video game manufacturers sold 174 million video games. That is good news for the economy, but not such great news for the environment. Video games and the consoles required to play them are made with large amounts of plastic — and not the kind of that can be recycled at the curb (in most cases). When you are ready to dispose of video games for whatever reason, you will need to find a specialized recycler to take them. Luckily, that may be easier than you think.

What are video games made of? 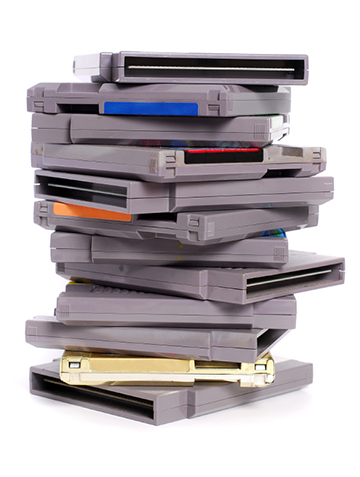 Video games come in a couple different formats. Today, almost all video games are on DVDs or Blu-ray discs. Both are made of a specialized material called polycarbonate plastic, which is classified as a #7 plastic (the catchall for “other” types of plastic). Because of this, video game discs can be mixed with other DVDs, Blu-rays and CDs for recycling. If you have an older video game system or a handheld Nintendo 3DS, you likely have stack of grey, black or white plastic cartridges hanging around. These “carts,” as they are sometimes called, are made of plastic but also contain circuit boards imbedded with different metals. It is worth recycling video games for a couple reasons. Like all plastics, they are made with petroleum and will not biodegrade. If they are placed in incinerators they can release toxic chemicals. In addition, both circuit boards and certain DVDs can contain precious metals like gold. Precious metals are not renewable resources and are extremely valuable. Mining them is tough on the environment. No Dirty Gold describes gold mining as “one of the most destructive industries in the world,” pointing to the water and soil pollution, destruction of natural areas and worker rights violations that are so often associated with mining. In most cases, video game cases are made of #6 plastic, also known as polystyrene, or PS. Polystyrene can be melted down and turned back into toys, smoke detector cases, kitchenware and a number of other rigid consumer products.

How to reuse video games

There are lots of video game exchanges that will buy or allow you to donate your unwanted video games. One example of an online buyer is Cash for Gamers, which takes just about all of them, even broken and very outdated video games. Typically, the company will even pay the cost of shipping so you can send in your video games. If you prefer to do business locally, many communities have stores that buy and sell used video games. GameStop has locations all over the country, or Google to find a locally owned store near you. Another option for your working video games is to see if a friend or relative wants them. They might appreciate the chance to play the games you loved but have beaten several times.

How to recycle video games

If your video games are broken or damaged, or you cannot find anyone who wants them, you have a couple options for recycling. Many government recycling centers will accept video games through their electronics recycling programs. For example, Waste Resources & Recycling in Phoenix lists both “video game cartridges” and “video game peripherals” as acceptable items on its website. The Electronics Recycling program in Normal, IL, will also take video game cartridges along with a number of other electric media such as Zip drives, CDs and DVDs. Nintendo offers a takeback program for all their video game systems and games. You can even send a competitor’s system if you can prove you have purchased a Nintendo. To recycle your videos games through Nintendo, box up all your old items, take them to the UPS store nearest you, and send them in. Nintendo will even provide you a shipping label if you email the program — meaning there is no cost to you for participating in the recycling program. Complete instructions and the company’s email address are available on its website. Any games that come on DVDs or Blu-ray discs can be recycled with movie DVDs and audio CDs. There are a few communities that accept DVDs and their cases at the curb, including Sandy, UT, and Lincoln, NE. However, you are more likely to find DVD recycling at your community’s recycling center. Glendale, CA, takes them without cases; Fredericksburg, VA, accepts them with cases. You can also mail them to recycling company like the CD Recycling Center of America (http://www.cdrecyclingcenter.com), which will recycle them at no charge (other than the cost of postage). If you need tips on recycling your unwanted video game console, check out the article “How to Recycle Video Game Consoles” on 1800Recycling.

If you are an old-school video game aficionado, you will appreciate these whiskey flasks that look like old Nintendo game cartridges. They even have names that parody old Nintendo games, like Drunk Hunt and Super Bar-Hop Bros. For only $20 ($85 for the collector’s pack) you can carry around your favorite adult beverage in something that looks just like a remnant of your childhood.