How to Recycle Bras

When you’re done with your bras, don’t throw them out! Recycle, reuse or donate them! 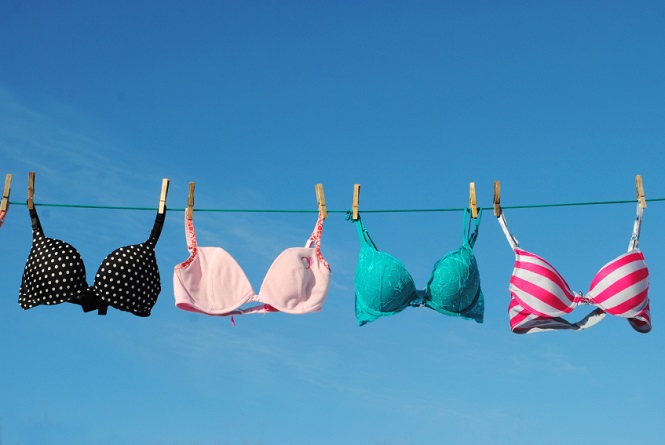 Here are some interesting bra statistics courtesy of Redbook.com: • The average American woman owns nine bras but wears only six on a regular basis • People around the world spend $16 billion on bras every year • 27 percent of women have decided against buying a piece of clothing because they did not have the right bra to wear under it Here is another fact that was not mentioned in the article: Bras are very easy to recycle. There are plenty of companies that take them and reuse, recycle or upcycle them. They range from your local thrift stores to places that accept them by mail. When you are ready to ban a certain bra from your wardrobe, don’t burn it. Get it to one of these great recycling organizations, or use it in one of the creative craft projects described below.

What are bras made of?

Bras can be made with several different types of fabric including cotton, lace and a wide range of synthetic materials. Many have an underwire formed from metal. Some have padding made from gel, foam and even water (remember the famous Seinfeld episode where Elaine’s undergarment springs a leak?). Most bras contain tiny pieces of metal or plastic on the straps and clasps. Fancier bras may be embellished with ribbons, rhinestones, charms or, if you are super rich, diamonds. (Model Gisele Bundchen, also known as Mrs. Tom Brady, is credited with wearing the most expensive bra and panty set every made. It cost $15 million.) Last year I had the pleasure of interviewing Michelle Judson, who runs a company called Changewear. She makes lace bras with a colorful removable insert so women can change the look of their bra depending on their mood or what they’re wearing (not a bad idea if you want to reduce the number of bras you buy). Judson told me that, besides running shoes, underwire bras are the most highly engineered type of apparel on the market. The next time you encounter a bra that looks like it was designed by a NASA scientist, chances are the scientist part is right.

How to recycle bras

Turns out there are a ton of ways to recycle old bras. One option is The Bra Recyclers in Arizona. They take wearable bras and give them away to women who cannot afford to purchase them. They also take unwearable bras and get them to a recycling organization. People interested in donating bras to The Bra Recyclers should wash them, fill out the company’s recycling form and mail them to the address listed on their website. The Bra Recycling Agency (better known as BRA) will also accept certain types of bras for recycling. They require you to purchase a $5 e-Kit to recycle your bras through their company. That amount covers all service and handling fees, including their cost to ship old bras to a company that recycles carpet padding. (Carpet padding is typically made from chipped-up polyurethane foam, although many processors allow some other textiles to be mixed in. It makes sense that they would accept bras since they contain many of these materials.) On top of the e-Kit fee, you must pay your own postage to mail your bras to BRA. Seems expensive, but if this makes you feel any better, the company donates the proceeds from all the metal underwires to breast cancer research. If you can hang on to your bras until this summer, you can donate them to the Giving is Beautiful campaign. Sponsored by intimate apparel manufacturer Soma and the National Network to End Domestic Violence, this program collects bras and gives them to women in domestic violence shelters. The program will only take reusable bras, and you have to drop them off at a Soma store. But if there happens to be a store in your neighborhood, what a wonderful way to give back to women who can truly use your help.

How to reuse bras

You may be able to donate your bras directly to a domestic violence shelter, homeless shelter or other social service organization. Call around to see if anyone is accepting them. Reusable bras can also be donated to thrift stores in most communities. Pinterest has some amazing ideas for using bras and their components in craft projects. The most popular seems to be transforming the bra cups into purses and clutches (one young woman said she took hers to the prom and got rave reviews). Several Pinterest pinners suggested uses for individual components of old bras. The straps can be turned into headbands or bracelets. The underwires can be used for necklaces. Or here is a fun idea: use an old bra to make a corset top, bustier or other sexy garment. Instructions for doing this abound online. Bras are commonly used in art projects. The best example is The Painted Bra Art Project. Since 2011 this nonprofit has auctioned off beautiful painted bras and raised $45,000. Money from these BRAsterpieces is used to purchase medical equipment used to detect breast cancer for local hospitals and clinics.