Did you know that there’s a trash island in the middle of the ocean? How can you stop your plastics from littering sea waters? 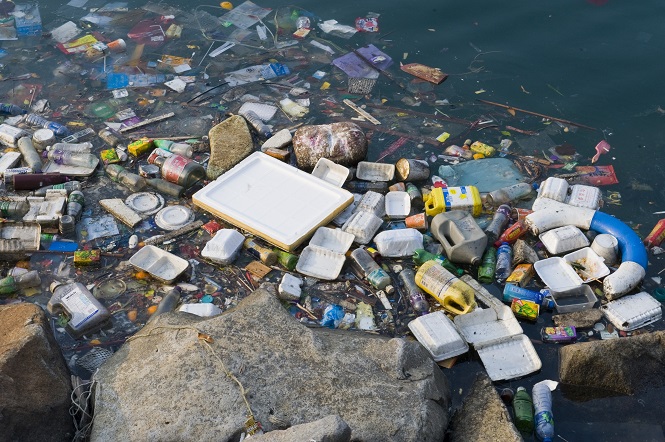 Did you know there was an island in the middle of the Pacific Ocean where tons and tons of plastic wash up on the shore? Because I sure didn’t. Not until I watched the documentary “Plastic Paradise: The Great Pacific Garbage Patch” (currently streaming on Netflix). Like most of us, I don’t think about the middle of the ocean on a daily basis. I think more about the edge of the ocean and the borderlands rich in culture and summer activities, like surfing, riding my motorcycle to the shore and cookouts. But while I’m enjoying just the outline of the vast bodies of water that cover most of our planet, there is a lot more going on that I never knew about. I have to admit I’ve heard rumors of this trash island before I saw the documentary. For example, I listen to a lot of stand-up comedy, and in a bit, Bill Burr was talking about where Rollerbades went (both literally and as a hobby in general). He said, “…they end up in the ocean. They’re made of plastic, they don’t biodegrade. They just break down into little cubes. Fish will breath them in. Six months later, you’re going out, you’re getting sushi. You think you’re being healthy. You’re eating your old rollerblades.” Of course, I figured this joke had been founded in some sort of truth, but I never stopped to really break it down. 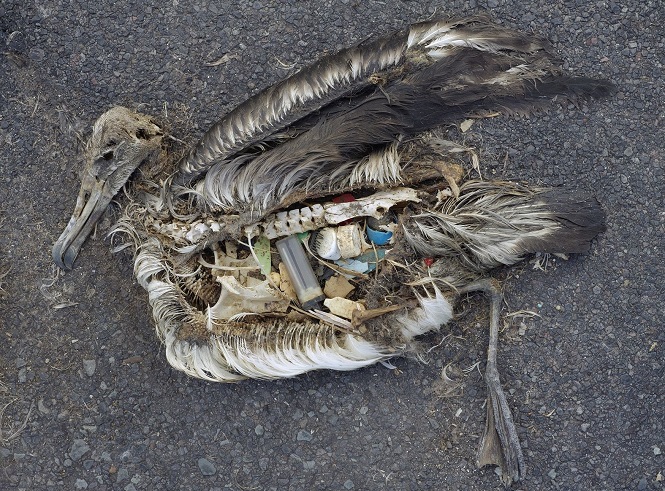 After doing my research, it turns out that Bill is probably referring to one of many studies done on plastics in our world’s oceans. One of the most profound studies that I’ve read is by the organization 5 Gyres. The study took 6 years and came to the conclusion that there are approximately 270,000 metric tons of plastic in the ocean, and this figure is only growing. The study also concluded that this island in the middle of the Pacific Ocean is a natural center for plastic collection. This seemed to confirm the first part of Bill’s joke. The ocean is full of rollerblades (and other old plastic trash). The island everyone is referring to is known as Midway Atoll. It is one of the most remote places on the planet, yet trash from both North America and Asia end up there on a regular basis. The trash kills life in and around the ocean for several reasons. What Bill refers to as breathing in small cubes of rollerblades may literally mean animals swallowing objects that get stuck in their system. Plastic isn’t digestible, and birds and other animals that eat these things end up being found dead, their stomachs filled with plastic objects. In addition to this, Bill may also be referring to harmful chemicals, such as BPA, that are found in plastics. Studies have started to conclude that this trash containing BPA is beginning to affect our own lives. Animals end up with BPA in their bloodstream from ingesting plastics, we eat the animals and, consequently, the BPA. This is how we “eat our rollerblades.” The reason this is so bad is that BPA has a grocery list of pretty terrible side effects that include cancer, diabetes and all sorts of reproductive issues. To take this to its logical conclusion: We are poisoning ourselves. Another consequence of polluting our oceans with plastics is the effects this litter has on algae and plankton. A report by National Geographic informs us that the massive amounts of plastic, for example, prevent sunlight from reaching far down to organisms like plankton and algae, obstructing their ability to feed themselves. The fact that this pollution affects things as low on the food chain as it does is a dangerous sign. Plankton and algae are part of the foundation of the food chain in the ocean. If those little guys die, the outlook for the bigger creatures is not so good. 5 Gyres is pushing for the following large scale changes in order to fix the plastics issue. But what can we do now? Although those solutions are helpful, they aren’t things we can do in our daily lives. Not each and every one of us is thinking about the middle of the ocean very often. If we’re even spending any time thinking about dying fish, it’s usually thinking about the canned tuna we bought at the store, not at City Hall lobbying for change.

We can take three simple steps to reduce the use of plastics in our own lives.