Out of Sight, Into the Landfill

When you take out the garbage on trash day, it doesn’t just magically disappear. It goes to the landfill. And do you know what happens there? 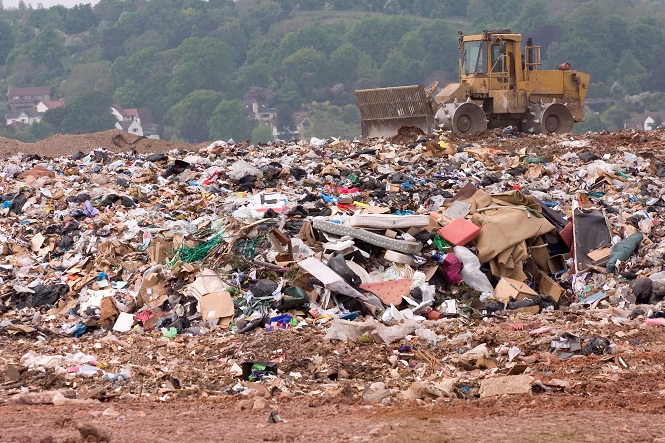 Y’know what I hate? Garbage. It’s so gross and it just sorta sits there, waiting for me to take it out, mocking me with its stink, singing songs about numbers with Big Bird… I may have gotten sidetracked.
Grouches aside, I’m pretty thankful for the fact that I’m able to take my garbage to the curb every week and then never ever have to think of it ever again. At all. Ever. In fact, trash day is my favorite day of the week, because I can just get rid of my junk and trust that it’s being disposed… of… properly…
Nope, I’m not gonna do it.
I’m not gonna ruin trash day for myself like I have showers, cell phone upgrades and heaters. I’m… I don’t wanna? Please?
Okay, fine. Let’s talk about stupid trash and the stupid landfills it gets dumped in. You happy now?

So, it turns out that there are about 8600 waste processing facilities in the United States. About 21 percent of those are the type of landfills that my garbage ends up in – municipal solid waste landfills (MSWLFs). And, even though I’m militantly not thinking about where my garbage goes after I toss it out, it seems that someone is. When I say the word landfill, my mind automatically conjures a picture of a gigantic trash heap, complete with green squiggly stink lines floating up from it. Turns out, I couldn’t be farther from the truth.
First of all, the gigantic trash heap is covered with dirt at the end of every day. Second, the landfill itself is so much more than just a heap of trash. When it’s built, a layer of compacted clay is placed on top of the native soil. On top of that is a membrane to keep the leachate (filthy, toxic liquid from the disgusting things you throw away) out of the ground. The membrane is topped with a leachate collection system so it isn’t just sitting there being gross. We’ll get back to that in a second.
Next comes the waste. It gets piled onto the plastic membrane all day, and then covered with dirt at night to keep rodents and insects out, to keep it from blowing away and to stop it smelling so bad. The next day, more junk is thrown on, and another layer of dirt is added, etc., etc.
Meanwhile, as the organic stuff in the landfill begins to break down, it creates methane and a host of other harmful gases. To keep people from breathing those too much, gas wells are installed. The gas is collected and either destroyed or burned for energy.
So, back to the sludge that drains off of the trash. Once it’s pumped out, it goes one of two places. It either gets processed and spread back over the waste to speed up organic decomposition, or it’s cleaned at a treatment plant to get all of the nastiness out of it and then sent to your tap. Gross, right? But don’t worry. They make sure it’s good and clean before they add it back to the municipal water supply.
So, once the landfill is landfull, it has to be capped. It gets another nifty plastic membrane, another two feet of compacted clay, a layer of low-permeability soil, and then topsoil and grass. And then a soccer field for your kids.
I mean, that all sounds pretty good, right?

What’s the problem with landfills?

Listen, we produce a ton of waste. Except that’s not really hyperbole. It’s more like the most drastic understatement in the history of landfill-related articles. We produce waste on a scale that our ancestors could never have dreamed of.
A million years from now, when the planet is ruled by cockroach people, their archaeologists will uncover all of these massive pockets of trash packed into the earth and they’ll think, “LUNCH!” But they’ll also wonder what in the world we were doing making so much waste.
Modern landfills are, right now, the best way we can think of get that junk out of sight and mind. But they’re not perfect. Those special fancy membranes we talked about? They’re made of some pretty sophisticated plastic, but they’re still just plastic. And plastic breaks, allowing leachate out to soil the soil and muck up the groundwater. Pipes clog, allowing the leachate to build up, which puts stress on the liner and destabilizes the pile.
18 percent of methane released into the atmosphere.
The cover that’s placed over the landfill is another potential failure point. It faces dangers from burrowing animals, settling waste inside the landfill, and the roots of the plants that are planted on top of it. And the post-closure maintenance the EPA mandates doesn’t last long enough to keep up with these sorts of problems.
So, landfills aren’t perfect. Not by a longshot. Who’d have thought that piling trash into a hole and burying it wasn’t an ideal solution?
But, even though they’re not the best answer, they’re a whole lot better than the old, open dumps we used to have. The technology is getting better, and the practices are getting better. Things are looking up.
If we really want to make a different, though, why not do our best to avoid putting stuff into landfills altogether? The less waste we produce, the less we have to worry about it seeping out of imperfect landfills.
It won’t be easy, but you’ve already helped me take the first step. As of right now, I’m gonna start thinking about where my waste goes. I dare you to do the same.