Carol Young uses all sorts of imaginable household items and stuff you would find in the basement to create pieces of art you’d never imagine. 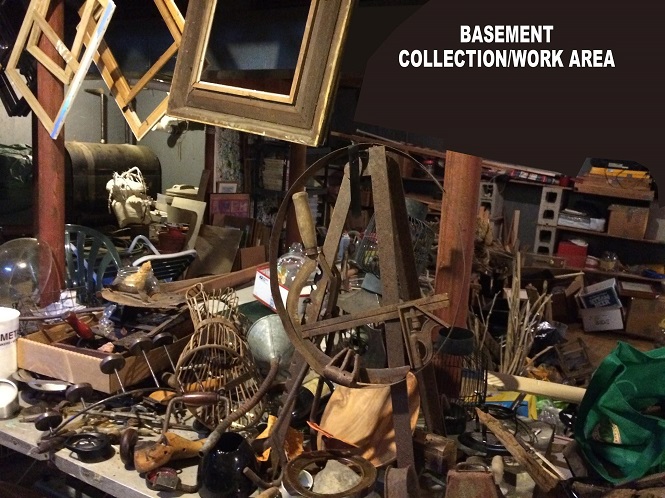 What do you see in the picture above? Some scrap metal and abandoned picture frames all left piled up in a basement? To Carol Young, it’s much more. As a retired art teacher in Essex, Connecticut, this pile of “junk” is a plethora of art supplies that may one day take the shape of something more like these weather charm 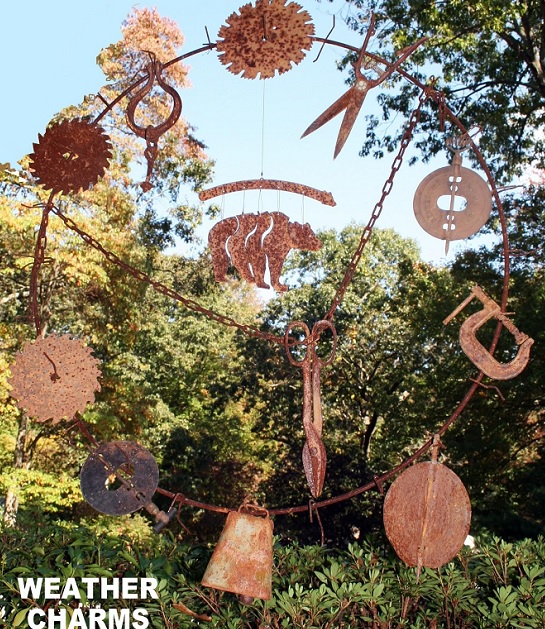 Originally from Cleveland, Ohio, Young taught art and creative problem-solving to children for 30 years in her very own studio, Imagination Unlimited. It’s no wonder she has been able to create such terrific pieces of art out of a wide range of materials, over two-thirds of her 130 original curriculum involved recyclable materials. At a young age, Carol started creating and she never stopped. She began making papier mache puppets, mudville townships, da-do-ity societies, then sewing birchbark canoes, box houses. She graduated from these art projects and grew to be quite serious about art, becoming president of her Art Club in high school and a recipient of the senior art award. Carol listed her father as a source of inspiration, noting that he would make toys for her and her siblings from almost anything that was at hand. Buckeyes and string, toy soldiers – you name it. In addition to her father, Carol named inspirations that were external to her upbringing. Yves Tanguey and Alexander Calder, especially his Miniature Circus. With such an interesting background serving as inspiration, I was curious what materials Carol would be using. It’s always a fun topic within eco-art, because the possibilities are endless. When I spoke with Amy Merli from Trashion Fashion, I learned about people using Smartfood bags. Some of the more notable pieces I thought were interesting in Carol’s work were clock parts, metal and iron parts and driftwood. But Carol hasn’t limited her work to any specific materials in her designs. She has also used cardboard, miscellaneous papers, packing forms, bubblewrap, milk jugs, all kinds of containers, odds and ends like clothespins, strings, old fabrics, plastics, old furniture, forest wood and rocks, among others. 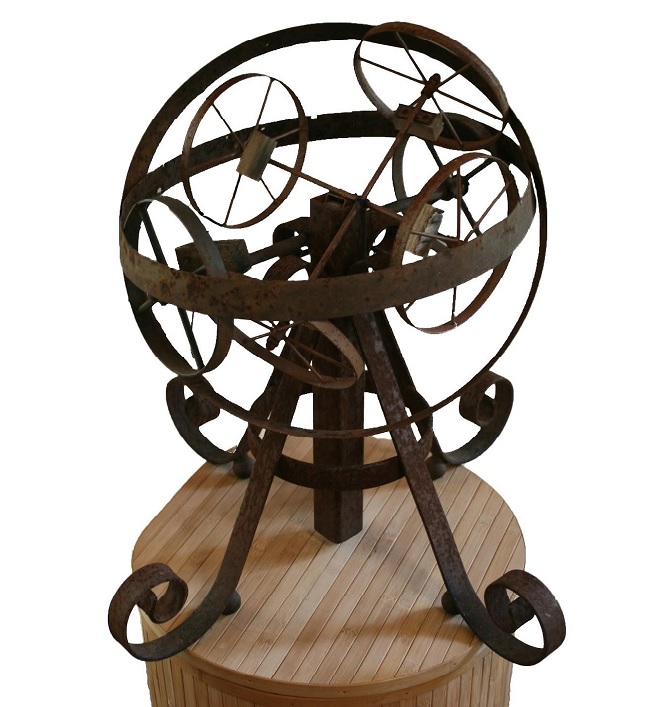 Some of these metal parts can be seen used in the image of the sculpture above. Carol’s piece “Circle, Cycle, Recycle” alludes, in my mind, to the idea of recycling and the symbol we are all very familiar with. It is a very unique take on the idea and shows just how imaginative someone can be in presenting us with reused materials. Some other creative uses of materials can be found in two other pieces “Dueling Dragons” … 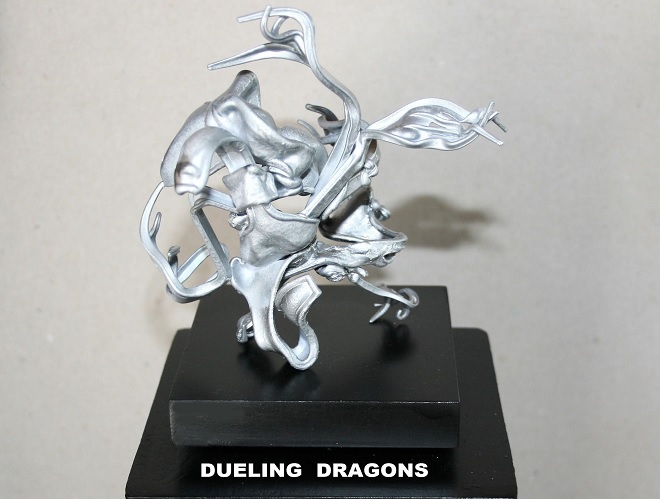 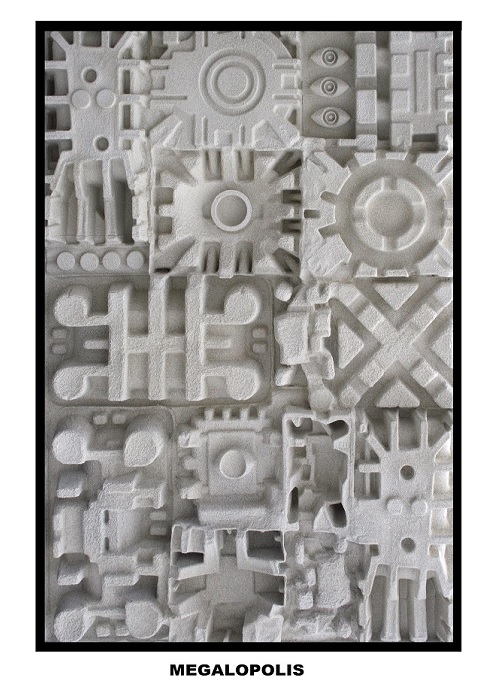 And last but not least, and probably by far my favorite, a sculpture entitled “Muse”. 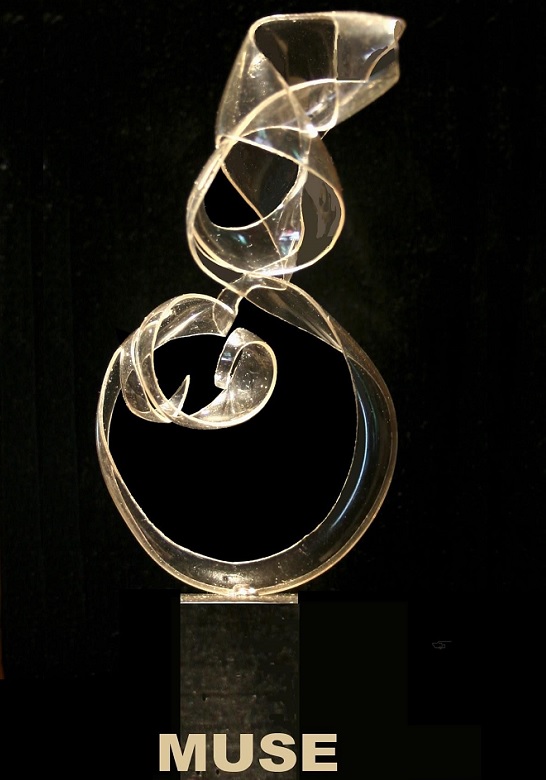 It may be my Women’s Studies background causing my bias, but it is such a simple and elegant piece. At the same time, it has such a powerful word attached to it. I like to think that as much as a Muse may refer to a source of inspiration for art, this piece is an inspiration for eco-art, specifically. There is no doubt that Carol, as an artist, is successful. Her work is very well done and thought provoking. I was also curious about Carol as an instructor – 30 years is a lot of time teaching. As an instructor, Carol has led many students, some of whom have had works go on to be featured at the South Street Seaport in New York when the Queen of Sweden arrived. The theme of that work was the Tree of Life. Other large scale exhibits included a student’s reconstruction of Stonehenge shown at Winslow Park in Westport, Connecticut. Another interesting one was the transformation of Carol’s basement into the ancient Egyptian Burial Chambers Museum. This project attracted 500 visitors, including teachers, superintendents of schools, first selectmen, and U.N. representatives. A video of the chambers won First Place at the Connecticut Press Club. But what about eco-art? It’s a relatively new word, Carol has been creating what we call “eco-art” for years. As far as both Carol and 1800Recycling are concerned, we’d love to see eco-art become more mainstream. Carol stated that the world is doing quite well on making us aware of problems like the K-cup catastrophe that one of our other bloggers, Dave Fidlin, mentions here. However, as far as improvements, she is passionate about global warming and finding alternative energies to oil. Carol wants more attention paid to these topics on the news, and I couldn’t agree more. I certainly have turned to alternative news sources for a lot of reasons, this being one of them. Carol just finished up being part of a Connecticut Women Artists Show in Hartford, Connecticut, where she won first place in sculpture. Her upcoming work will be featured in various other places in the coming year and will include 3-D wall art, painting, collage, sculpture and more. She will specifically be at an art gallery local to me in New London, Connecticut – Hygienic Art . This gallery was very kind to put me in touch with Carol. Some of the details are still to be announced for some of her shows, but here are the events that I do have. One-Woman Show at the Essex Art Gallery http://www.artessexgallery.com/ Date: June, 2015 0 Main St, Essex, Connecticut 06426 (860) 581-8553 Gaia’s Lament at Hygienic Art http://hygienic.ning.com/ Date: July 3, 2015 – August 1, 2015 79 Bank Street New London, Connecticut (860) 443-8001 Note: All images used with permission from the artist, Carol Young.