Dutch artist Desiree Jacobs is using items and leftovers found in her studio and her community to make art the transcends borders.

For this Artist Spotlight, I enlisted the power of the Internet, tweeting the following from my Twitter account @_ryanoconnor:

I received only one tweet back, and much to my surprise it was someone from Amsterdam. The thought that initially crossed my mind was “Oh no, how will I ever feature this person when I don’t know what they are saying?” I’ll be honest my next thought was, “Well, I have a few other artists who are currently in the process of gathering some information, maybe I can press one of them to hurry up?” I mean honestly, how could I learn Dutch in such a short period of time? I decided, however, this was an opportunity. I have the ability to connect with someone in another place on the globe who has a perspective and a voice on a topic I love. That isn’t an opportunity that shows up terribly often, and I’d rather grab ahold of a chance like that than discard it. It is 2015 after all. We have tools for situations exactly like this. Google Translate, for example, can build bridges between worlds that may have never had a chance of crossing paths before. Only a few years ago, we may have had to track down our local Dutch-speaking friend to tell us what was going on when we encountered a website in another language. This day in age we can simply open up our web browser, and when prompted with the following question:

we simply click “Translate” and are off and running. And with that translate button, I was opened to the world of Twitter user and Amsterdam-based artist, Desiree Jacobs aka @day4art. I took the challenge and spent some time reading the blog of someone who was born in France, lives in Amsterdam and has so much to say. Some of the sentences were structured crudely due to the translator (not to the fault of Desiree), but the majority of the meaning was still there. For the most part, I found that I didn’t even need text to understand the message behind the piece. 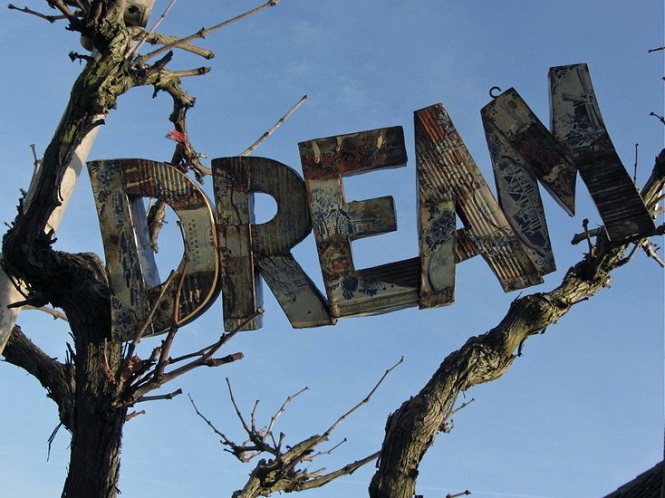 This sculpture is made of old paint tins and spells out the word DREAM. The translated text reads: “(Day) dream. Possible everywhere and always! Transformation of discarded (and found) rusty Dutch biscuit- and paint tins.” This certainly isn’t a message that applies to just one language. I don’t want to sound too stilted here, but expressing the word DREAM using old paint cans seems to elicit a feeling that even in hard times we should keep our heads high and our minds open to new possibilities. This speaks to recycling in a lot of ways. Everything has a use, it’s just finding how we can use that thing and give it new life. More works that I found had similarly profound meanings. 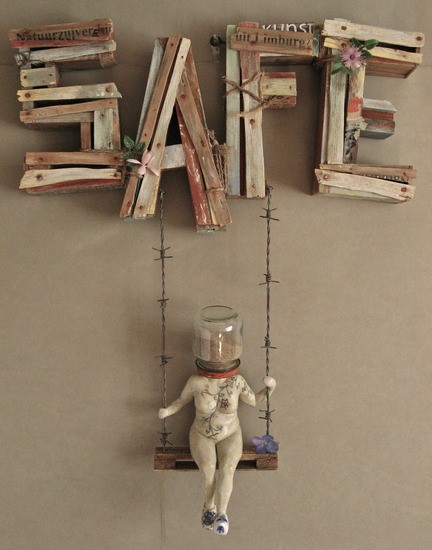 The translated text this time read, “Bury your head in the sand. Things we don’t want to know, don’t want to see, pretending they’re not there. Everything is ok, I (am) Safe. The culture of looking away… (studio clean up, found objects and clay)“ It’s remarkable that these messages can cross so many different cultural boundaries. Certainly, Desiree Jacobs and I grew up in very different settings. I can’t even imagine what Holland or France is like. I’ve only seen it in pictures or movies, and yet this message was clear to me. It is something that happens in the United States each and every day. The idea that “Ignorance is Bliss” or “What you don’t know can’t hurt you.” It’s a lazy way of solving recycling problems (or any problems for that matter). Just stick your head in the sand, and you’ll be safe. Last but not least was an image that I simply enjoyed looking at. 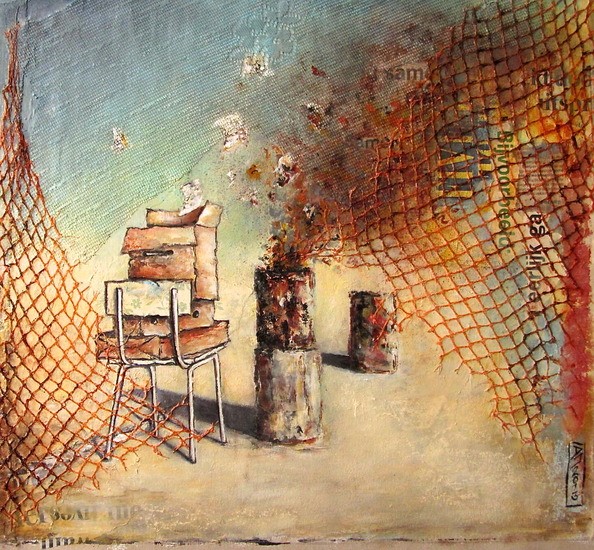 “Travelling light into 2013. Cleaning out the old. With recycled net-curtains and fruit-nets. Not framed. “ I did some exploring and found two words hidden behind the nets. One was eerlijk which translates to “honest”, another was “bijvoorbeeld” which translates to “for example”. I’m not entirely sure on the meaning of this piece, but it being spring time here in the US, I thought it spoke at least to both a literal and figurative spring cleaning. It bared the resemblance of my basement a time or two when in need of getting rid of old things. Those words may be speaking on another level of getting rid of old habits and being honest with ourselves. The words may be telling us to look at specific events rather than being vague. Recycling needs to be faced head on and cannot be accomplished passively or with your head in the sand. We need to work at all levels including the specific, like “How do I recycle a paint can?” This is of course just my interpretation, and that’s the wonderful part about art, we all look it from so many different angles. All in all, I think that Desiree Jacobs is an example of a great eco artist. These were only a few of her pieces, but I would encourage you to check out her website, for even more great work. Be reminded that the website is in Dutch, but through the use of the Google Chrome web browser, you should have no trouble understanding a lot of what she is speaking about. The technical side of me also supports this browser as a safer and more efficient alternative to some other modern browsers. If nothing else, at least look at some of her images. Take the time to appreciate the fact that this day in age we are so easily accessible to people across the globe. Then think of how much we could do to better improve the climate of recycling-related issues through this ease of connection.