Artist Lin Evola-Smidt has been advocating for peace and social change with her powerful statues.

I am excited to share with you an artist who has truly broken boundaries with her art. Her name is Lin Evola-Smidt, and she has taken the use of recycled materials in art to new and emotional heights. Evola-Smidt recognized the damage and pain brought on by gun violence and vowed to use her skills as an artist to recycle this needless violence into hope and beauty.

This all began when Evola-Smidt learned of the horrendous amount of gun homicides occurring in Los Angeles in the 90s. At the time, she had a young child and wanted to change, for the positive, the world her child would grow up in. She began to work with the communities of L.A. to encourage them to give up their guns. But this was only the beginning of a long journey for Evola-Smidt. She created an outlet for these guns to be returned to the community. Melting down the weapons created a powerful medium for Evola-Smidt to work with. She then painstakingly crafted beautiful angels from the raw metal to represent the peace created from the removal of guns from the streets. Her first statues to peace were 3-feet tall and were quickly accepted and admired in Los Angeles. Yet, as more and more weapons came in to be melted, with help from local law officials, Evola-Smidt decided to create angels on a much larger scale. Her iconic statue, “The Renaissance Peace Angel,” when completed stood 13 feet! She had transitioned from small reminders of peace to larger pieces that could stand as the centerpoint of community parks.

“The Renaissance Peace Angel” lived in California for six years before a tragedy required the peace angel’s presence to help heal. In the weeks following the 9/11, Evola-Smidt had the statue moved to Ground Zero, where it sat as a sign of peace and resistance to violence. It soon became an important symbol of healing for New York City and was adorned with the many signatures of the police and firefighter crews that helped in the aftermath of those attacks. Instead of moving the angel or selling it, Evola-Smidt gifted the prized piece to the city of New York to keep in the September 11th Memorial and Museum. In 2013, the statue was officially accepted to the museum, where it will remind all of the importance of transforming violence and pain into love and compassion. 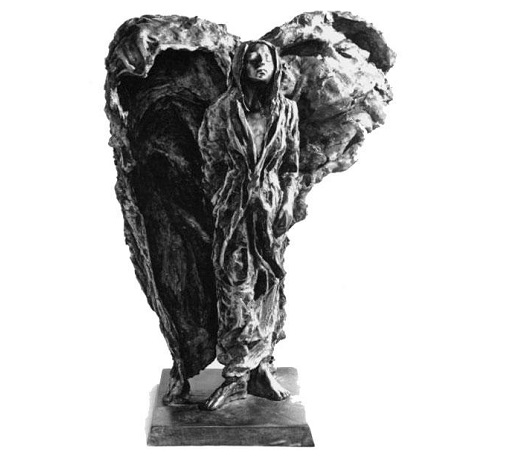 Evola-Smidt’s story doesn’t end with “The Renaissance Peace Angel,” though. She has worked with communities around the world turning swords into ploughshares, using a variety of materials weapons such as landmines and decommissioned steel from nuclear bombs. Furthermore, Evola-Smidt relies heavily on the culture and society that provides the raw material and home for the angel for its inspiration. Each angel is designed with the identity of these communities in mind. A few of the places that have come together to have an angel created include Mexico, Korea and Jerusalem. Her work continues on to this day, with hope for creating even larger statues, including someday to create ones that rise 32 feet into the air. These massive statues would represent 100,000 weapons that are no longer in use – a true testament to both her work and the power of art to bring the world together to stop violence.

A closer look at the Peace Angels

Of all the statues, my personal favorite has to be the statue for Mexico. In this piece, the male figure stands strong, leaning on a sword to balance himself against the tremendous pain and suffering Mexico has seen. Instead of using the sword as a weapon, the sword, like the piece itself, has been altered into a symbol of stability and strength. The wings, as on many of her pieces, are abstract. The bubbling and shifting nature of these wings provides a sense of movement to the otherwise static piece. The angel’s fierce gaze looks out across the landscape knowing both the challenge and necessity of its goal. My other favorite angel is the statue for Jerusalem. By looking at this angel in relation to the statue for Mexico, we can truly see the breadth of Evola-Smidt’s artistic range. In this piece, the female figure stands with her head to the sky, eyes closed. Her thin figure is adorned with a modest robe and her feet are left bare. Less abstract than Mexico’s angel, Jerusalem’s angel wings are loosely shaped in the form of a heart – a powerful reminder of the importance of love. These angels serve as a testament to how materials can both find new life and harbor new meaning. Lin Evola-Smidt’s work is a prime example of how with passion and a strong will for positive change, great and powerful ideas can flourish. She begs of us to reach into the communities that surround us for inspiration, help and, most importantly, love.