As droughts plague more of the nation, the (stressed) future of water has everyone one looking for solutions. 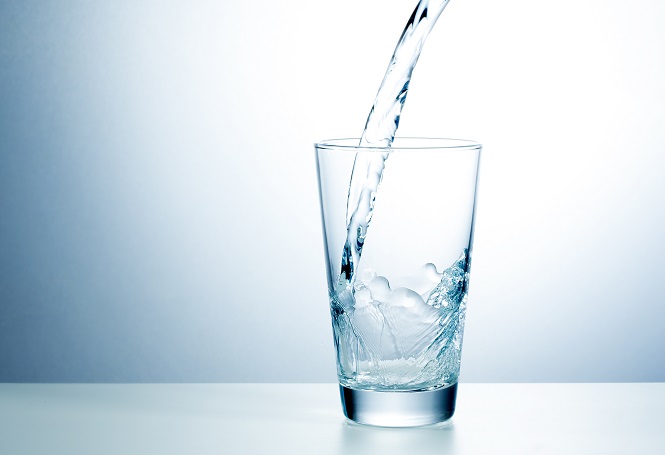 Bill Gates did it, Singapore does it and you might be doing it right now: drinking former toilet water. And you haven’t even died. Maybe your dog is on to something. But before you start feeling nauseous, we’re talking highly filtered water here.
Bill Gates made waves a few months ago when he pulled his “poo water” drinking stunt online. The water was human waste just five minutes before Gates bravely took a swig. The water looks as clear as it can be, and Gates declared it to be “just water.”
The stunt brought huge media attention to the Janicki OmniProcessor, a machine that not only converts human waste into clean, drinkable water, but generates its own electricity as well. The machine collects the vapor from the waste during a boiling process and turns it into clean water. The then dry waste is burned to make steam, which powers a generator and creates electricity. The electricity powers the machine and can deliver electricity back into the community. This self-contained wonder would be perfect for low-resource countries that are in desperate need of clean drinking water.
But it’s not the only idea out there. Engineers are now looking at ways to cut out the middleman and create a system that can quickly turn sewage back into usable resources.

Membranes and other tech

One such device in the works is The Nano Membrane Toilet. This device gets right to the source and would treat water within the toilet. Waste would be filtered and processed out of sight and odors would be blocked off. Solid waste would be separated via sedimentation. Low glass transition temperature hollow-fibre membranes would separate out water. Like the OmniProcessor, the membranes would separate water from the waste in the vapor state, leading to sanitation. Nano beads would collect the vapor and the water would be kept in a reservoir for household use. Solids are transported to a gasifier to be burned and converted into energy. Think of it as a mini OmniProcessor for your home.
Earth Magazine also reported on several emerging technologies. One is the anaerobic membrane bioreactor, a device that could be added to conventional wastewater treatment facilities. Membrane bioreactors are already used to break down organic matter in sewage through the use of aerobic bacteria. The anaerobic membrane bioreactor would mean the bacteria in the reactor don’t need oxygen, which would take bubbling oxygen out of the reactors and reduce treatment costs.
Another idea out of the J. Craig Venter Institute is to create microbial fuel cells in which the bacteria breaking down waste also generate electricity. When bacteria break down organic matter they produce electrons and protons. The bacteria would be put into fuel cells that would channel electric current as the bacteria breaks down organic matter.
Another device involves using light and electricity to sterilize water. Ultraviolet light and electricity would neutralize pollutants. The device is supposed to be good against molecules like those from pesticides, dyes and drugs.
Yet with all these positive ideas and unique approaches, are we really ready to embrace water that was human waste just a few minutes before drinking?

Turns out we still can’t completely get over ‘poo water’

A study published in the journal Judgment and Decision Making looked at just how deep our squeamishness goes in regards to recycled water. Participants were asked, “Would you be willing to drink certified safe recycled water? (NO, UNCERTAIN, YES).” Luckily, only 12.9 percent gave a resounding no. 38 percent said they’d possibly try it and 49.1 percent said they’d definitely try it.
That still puts almost half of us with deep-seated disgust or on the fence in regards to drinking recycled water. The study discussed some of the ideas we have about contamination. Some of us have a deep sense of “indelible or spiritual” contamination in regards to recycled water.
The study mentioned prior work in which people refused to touch a drink that had a heat-sterilized cockroach dipped in it. And there’s that infamous study where people wouldn’t touch a sweater they believed had belonged to Hitler, but they would touch it once they believed it had been worn by Mother Theresa. In short, we won’t touch certain things because of our own vague sense of what’s been contaminated and what’s clean. Recycled water falls right within that margin of our views on what is clean and what is dirty.
The study goes on to mention, “Further processing or more details about processing may be an ineffective strategy for increasing acceptance. The fact that tap water is much more acceptable than water that is actually safer (boiled/evaporated/condensed) suggests that tap water acceptability is based in part on either ignorance of the purification process, or failure to think about it at the point of drinking it. The lower discomfort for tap water might also result from its familiarity, which could dampen concerns about risk.”
Meaning, it’s time to get more familiar with recycled water.

Recycled sewage systems in use today

Singapore always stands as a model for reclaimed water. It’s a small landmass with little place to store water. In 2003, it was lauded for its NEWater system, which recycles waste water with technologies like microfiltration, reverse osmosis and UV disinfection. The recycled water is a safety superstar, going beyond the World Health Organization’s standards for safe drinking water.
California’s been at the game of recycled water for a long time, what with their many droughts. Many communities use the same technologies as Singapore. Odds are, your community already recycles sewage water as well. Plus, all water on the planet is recycled. Remember, you’re technically drinking old dinosaur pee right now.
With water getting scarcer on the planet, it’s not a matter of what your water used to be when. It’s a matter of how innovative and efficient we can get about making it safe to drink. Super clean, freshly filtered water is better than no water at all.