Plastic bottles can be found everywhere – in our landfills, streets, rivers and oceans, with little sign of slowing down. The prevalence of these containers, often used only a single time, account for millions, if not billions, of pounds of global waste. However, some individuals have found few ingenious ways to reuse plastic bottles, transforming their ideas from a crazy design into reality. Below you will find a broad spectrum of possibilities, from the backward DIY projects to truly incredible feats of engineering that will hopefully inspire you to create your own recycled plastic bottle creation.

The first on our list is so ingenious, useful and efficient that I can’t believe it wasn’t thought of sooner. The idea was developed out of a partnership between the MyShelter Foundation and MIT students. It tackled the issue of how to provide light to those living without, or unable to afford, electricity and combined it with the idea of using recycled materials. What came out was a lighting system that only requires water, bleach, plastic liter bottles, and weather sealant. The bottles are filled with water and a little bleach to hinder algae growth then positioned in the roofs of buildings. They are then sealed in place to ensure the elements don’t get in while allowing the radiant light of the sun to pass through. As the sunlight strikes the top of the bottle on the outside of the building it is refracted through the water and dispersed inside where it is needed. “Liter of light” was first implemented in the Philippines where the intense sunlight can be refracted through the bottle to create light equivalent to a 50-watt lightbulb. The project has been widely adopted in the region, with well over 20,000 homes using the technology and a goal of reaching over 1 million installations this year. Even if you have access to electricity, this design could be used in a variety of situations to save power. You could provide light to an outdoor shed, chicken coop or even go crazy designing a deluxe treehouse.

Everyone enjoys watching birds happily eating seeds in their backyard. Instead of buying a feeder, save yourself some money and re-use a plastic bottle to make your own. The project only needs a few tools, and there are numerous designs for you to pick from. Most are simple to create and make the recycled bird feeder a fun project for the whole family. It is also a great way to teach children to think creatively, enjoy nature and learn the benefits of recycling. The first thing you are going to need is a plastic bottle. For this project, I recommend a smaller plastic bottle so it won’t get too heavy for hanging. Next, you will need to decide how to design the bottle. Jump onto your computer and do a simple Google search of “plastic bottle bird feeder,” look at the image section and you will find plenty of cool designs. My favorite design used wooden spoons pushed through holes in the bottle to create a seed reservoir and perching area for your little feathered friends. I decided to go ahead and build one. I found two old wood spoons that were no longer in use. Using a knife, I cut four X’s on the sides of my bottle and then pushed the small end of the spoons through. With those safely in place, I poked a hole big enough for some bird seed to fall out onto the spoons. With the bottle filled, I simply wrapped some string around the neck of the bottle and tightened the lid securing the string in place. Once the weather clears up, I‘m going to set it up in my yard and see how it works.

This next plastic bottle recycling design caught my eye after I arrived home soaked thanks to a sudden rain shower during a bike ride. It wasn’t that I was caught out in the rain – it was the never-ending supply of water flinging from my rear tire that really did me in. It was a horrible reminder that my bike didn’t come with a fender. 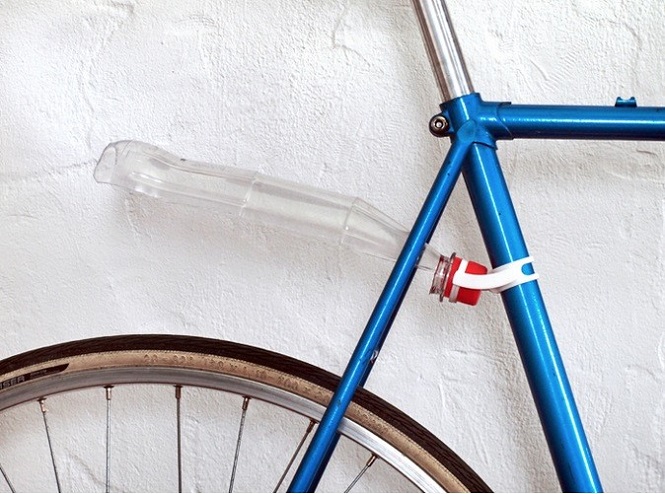 In comes the bicycle bottle fender mount created by Michael Mueller. He saw someone haphazardly attaching a bottle under the seat to act as a fender and decided to build on the idea. Mueller created a clip that fits over most plastic bottles and attaches to the back of the bike frame. With just one simple idea, the pants of bike commuters everywhere can stay dry. Mueller advised cutting the bottle in half, as he thinks it looks better, before attaching it to your bike to block unwanted water from the road. Check out his online store where you can get different color clips that he will print using a 3-D printer to fit your bike.

The plastic boat designed by Tom Davies is truly a crazy recycling design. The native New Zealander used 600ml bottles to create his boat. The flat-backed boat design is impressively water-worthy. In Davies’ test, he stated three big men were able to sit in the boat without it sinking. Davies’ designed the craft by connecting all of the bottles together with glue and a foam base to add structure to the vessel. What I find remarkable about this idea is the potential outcome if more are created. They are in effect cleaning the very waterways they use. With each boat, 600+ bottles are being removed from the environment and combined into a vessel to then explore the transformed area. Davies’ envisions that if his village adopts this boat building project, the area will become much cleaner. Additionally, the new plastic boats will last much longer than traditional bamboo crafts.

This has to be one of the craziest recycling ideas. Artist Richart ‘Reishee’ Sowa began to create his own personal island by building a foundation of recycled plastic bottles and nets. He called it Spiral Island, and upon completion, he had used over 250,000 plastic bottles to create an area of nearly 3,564 square feet! Sowa covered the plastic with a frame of plywood and bamboo before covering the island with sand. In the end this island supported a two-story house, numerous mangroves, solar panels, composting toilet and many other conveniences. Spiral Island lasted until 2005 when Hurricane Emily destroyed the island based off the cost of Cancun. Luckily for Sowa and the ocean ecosystem, the island was held together tightly by the plants growing on it and the majority of the island washed ashore intact. Sowa didn’t give up after the destruction of his home. He started again two years later with a new plastic island he called Joyxee Island. He has since continued to work on his new island with the help of volunteers as an art project showing both the scale of global plastic waste and the potential for creative new designs and ideas for using this waste. That is all for today’s article. If you have your own ideas or designs, tell me about them on Twitter at @ResfordRouzer.